“Credit is the lifeblood of housing.”

– Eric Belsky,
then with Harvard’s Joint Center for Housing Studies.

“Pay more attention to what people do than what they say.”

As you read what follows, bear in mind what Marty Lavin said above.

In a column in American Banker, Doug Ryan with CFED (rebranded since then to Prosperity Now) had the headline: “Time to End the Monopoly Over Manufactured Housing.” It opened as follows.

“For too long we have ignored a segment of our housing system that offers an affordable path to homeownership: manufactured housing.

A manufactured home is the only option for many low-income families to own a piece of the American dream. But those families often have limited access to competitive loan-pricing that is available to more conventional home buyers, thanks in part to low participation by Fannie Mae and Freddie Mac in the manufactured housing market.” So far, so good. Those are objective realities that Ryan cited.

The next two paragraphs are deliberately taken in reverse order, Ryan said: “That means borrowers of manufactured home loans often must turn to an uncompetitive market, dominated by Clayton Homes, which does not have to rely on the secondary market for capital.”

Ryan didn’t say it then, but there are lenders who make loans on manufactured homes that are far more competitive than 21st Mortgage Corporation and Vanderbilt Mortgage and Finance (VMF), both of which are owned by Berkshire Hathaway and are sister companies to Clayton Homes. One of those reports, from Prosperity Now, will follow further below.

Deeper into Ryan’s American Banker column, he wrote: “According to the Consumer Financial Protection Bureau [CFPB], even families who own the land beneath their manufactured home — and therefore in certain cases qualify for a real estate loan — tend to rely on a chattel loan.

Those borrowers often follow the suggestion of firms such as Clayton Homes, which dominates the market for building, marketing and financing of manufactured homes. The company has no need for Fannie and Freddie since it accesses the capital markets through its parent Berkshire Hathaway.”  That’s largely accurate, according to the CFPB and other industry data too. Recent information suggests that some 75 percent (+/-) of manufactured home loans are personal property lending, which also go by the name ‘home only’ or ‘chattel loans’ that are not tied to the underlying real estate.

Ryan also insightfully said that, “Those dominating the industry [i.e., the aforementioned Berkshire Hathaway brands connected to Clayton Homes] likely fear incursions into their vertically integrated market.”  21st and VMF are the two biggest lenders in manufactured housing, and they do indeed dominate the marketplace.  Numbers of manufactured home independents fear speaking out against Clayton or Berkshire because they ‘depend’ on 21st for much of their lending to sell homes. Berkshire lending ‘buys deeper’ – meaning lower credit scores.  That explains part, but not all, of the Berkshire brands higher interest rates, per industry lenders who tell MHLivingNews that they offer similar lending at a lower rate and payment but are regional instead of national.

Ryan also wrote for American Banker in that same column: “The system currently discourages Fannie and Freddie from investing in manufactured housing. The two government-sponsored enterprises will more typically buy or securitize loans secured by real estate, while staying clear of “chattel loans” — used for most manufactured home purchases — a type of financing in which a home is not legally bound to its land.” That’s inaccurate and thus misleading. How so? Simple. Where is there evidence of a “system” that “discourages Fannie and Freddie…” other than their own desire?

Certainly, the Housing and Economic Recovery Act (HERA) 2008, which put them under the Federal Housing Finance Agency (FHFA), has NOT told the GSEs to avoid manufactured home lending or more specifically, home only lending. Quite the opposite.  They are mandated to loan on manufactured homes, as a report by the Manufactured Housing Association for Regulatory Reform (MHARR) outlines in their report linked here. HERA mandated that the GSEs support manufactured housing.  So, the legal “system” makes it plain that there is no discouragement. MHARR’s President and CEO, Mark Weiss – an attorney – has said the following about the Duty to Serve.

It is worth mentioning that Ryan, who described himself as “the director of affordable homeownership at the Corporation for Enterprise Development,” (CFED) which has since been rebranded as Prosperity Now.

It is worth mentioning that Congressional Representative Maxine Waters, and some other Democratic lawmakers have similarly pointed the finger at the Berkshire Hathaway brands in manufactured housing and referred to their “near monopolistic grip on lending to minority borrowers seeking financing for manufactured housing reaching nearly 72% of African-American borrowers, 56% of Latino borrowers, and 53% of Native American borrowers.” See that letter, linked here. Representative Waters (CA-D) is now the Chair for the powerful House Financial Services Committee. There are other voices and evidence inside and outside of manufactured housing proper that have accused the Berkshire brands of having monopoly-type power. For more on that, see a related report, linked below.

Let’s circle back to the top quote. “THE LINCHPIN OF THE HOUSING RECOVERY”

Wrote Eric Belsky, then the Director of the Harvard JCHS on Wednesday, September 12, 2012.  He said the following in his opening paragraph.

“Credit is the lifeblood of housing.  Without credit, housing does not get built and home buying is possible only for those with enough cash to cover the full costs. We live in a society in which many homebuyers lack the ability to come up with large downpayments.  Thus, the availability of low downpayment loans for first-time buyers is critical to recovery of the for-sale market, especially now that so many homeowners are underwater on their mortgages and unlikely to sell until doing so does not force them to suffer a loss.  This is one of the main reasons that the Federal Housing Administration (FHA)—an agency launched in 1934 to get credit flowing to housing during the Great Depression—has been so essential to this housing recovery.”

So, access to reasonable low-down payment loans is a key factor in the U.S. housing market, said Belksy, an expert in the field.  HERA 2008 mandated by law that the GSEs of Fannie and Freddie would do similarly.  But to this day, there is only a very limited amount of lending by the GSEs, and it is often on higher cost specialized manufactured home products, promoted by Clayton Homes and MHI, not the more affordable bulk of manufactured housing.

On Monday, December 17, 2018, Prosperity Now listed some of the features of their annual “I’M HOME” conference, which has for years spotlighted manufactured housing. They wrote that the “first annual Innovations in Manufactured Homes (I’M HOME) conference in 2005, a few dozen advocates debated manufactured housing’s sustainability as an equitable housing strategy. During the 14th Innovations in Manufactured Homes (I’M HOME) Conference held in Nashville, Tennessee…with hundreds in attendance…”

Skipping down, here’s what they had to say about the GSEs. “Another peak of the conference was the plenary exploring the current state of Fannie Mae and Freddie Mac’s Duty to Serve programs. The two agencies are about a year into their Underserved Markets Plans and have made progress in better serving the manufactured housing market. 2019 is expected to be a very important year for the manufactured housing markets as regulatory and statutory changes are considered.”

If that seems muted from what Doug Ryan told American Banker, no argument here. What happened to their pressing for competitive lending by the GSEs at lower rates than Clayton’s affiliated lenders?

That’s an important question.  Ponder this disclosure on the same article.  Let’s note that MHLivingNews for years has turned direct quotes bold and brown to make them ‘pop,’ but otherwise leaves the text the same as the in original cited.  In what follows, the underlined words are added to draw more attention to them.  Here’s their disclosure on that same post: “Prosperity Now thanks our 2018 I’M HOME Conference sponsors: Wells Fargo Housing Foundation, the Tennessee Housing Finance Agency, Fannie Mae, Freddie Mac, Affordable Housing Resources, the Center for Indian Country Development at the Federal Reserve Bank of Minneapolis and NeighborWorks America.”

The largest shareholder of Wells Fargo is Berkshire Hathaway, per CNN Money. Years previously, Fannie and Freddie had deep ties to Berkshire Hathaway. At some point, the GSEs hope to be released from the domination of the FHFA. Indeed, that’s the plan of several in Washington, D.C.

The HERA law mandates that manufactured homes be supported by Fannie Mae and Freddie Mac.

We opened this column with three quotes from experts.  Credit is the lifeblood of housing, said Eric Belsky. Marty Lavin stressed it isn’t words that matter as much as the deeds that matter. Lavin also said, follow the money; meaning, pay attention to who benefits from what and who pays whom. 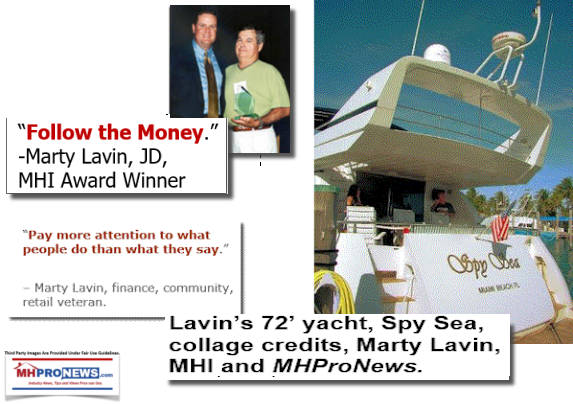 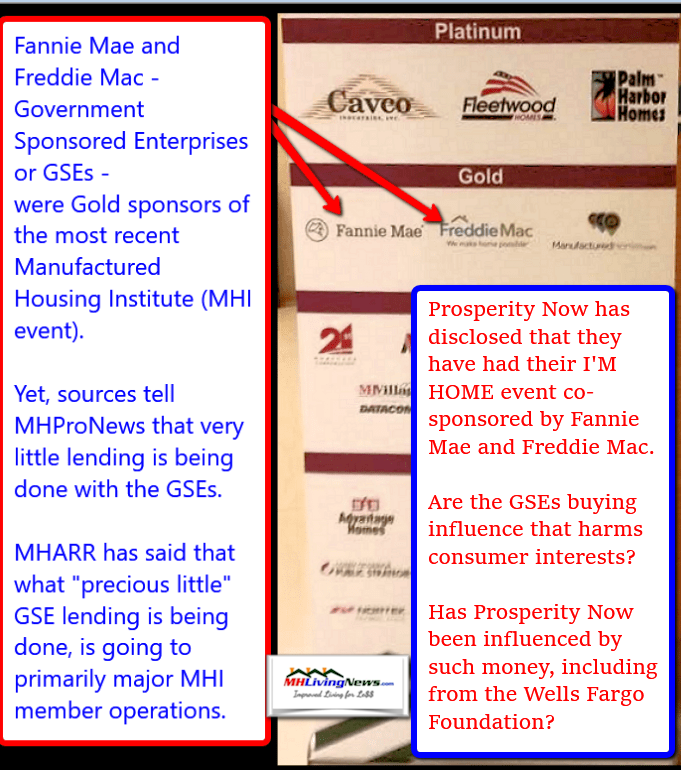 It’s looking like there are apparent conflicts of interest afoot. At least Prosperity Now mildly disclosed it, as shown, without making the points made in this analysis.

The losers from that purported conflict of interest are the very people that Prosperity Now says should benefit from lower interest rate loans and from easier access to lending that makes home ownership possible. To their credit, with the wheat and chaff approach we support, Prosperity Now believes in manufactured homes and its value especially to those who may never be able to buy another of form of housing. That’s good. But support from the GSEs and Buffett led Berkshire’s ties to Wells Fargo make are sources of concern how those dollars are influencing their decisions in ways that may continue to benefit Clayton Homes and their affiliated lenders.  Clayton is being investigated for several legal issues in Washington, including the ones in their hometown news video report below.

The harm done by such maneuvers are arguably to large numbers of everyday Americans who own or may want to buy a manufactured home at a lower interest rate, easier terms, and milder payments. It seems to be a sad, tangled web. “We Provide, You Decide.” © ## (News, analysis, and commentary.)

Submitted by Soheyla Kovach for MHLivingNews.com.

Soheyla is a managing member of LifeStyle Factory Homes, LLC, the parent company to MHProNews, and MHLivingNews.com. Connect with us on LinkedIn here and here.