To understand the warning and/or alert noted in the headline, some background is useful.

Dave Anderson is the Executive Director of the National Association of Manufactured Homeowners Association (NMHOA). Prior to NMHOA Anderson was the executive director with the Minnesota-based All Parks Alliance for Change (APAC).  Both ‘resident’ organizations state as their mission to benefit and protect the rights of the owners of mobile homes and manufactured homes, notably those who are living in a land-lease community.

MHLivingNews and our professional sister site has for some years periodically spotlighted challenges that occur for some, not all, residents of manufactured homes living in a land lease.  Tens of millions of Americans don’t understand a land-lease much if at all.  But in various parts of the nation, including but not limited to parts of – Hawaii, Chicago, Maryland, tribal lands – conventional houses are also built on a land-lease.  Much of commercial property is also on land with long-term land lease.  I’ve personally seen high-dollar ‘elite’ site-built housing on a leased land.

So, leasing land is not as odd as some may think when it comes to some, not all, living in manufactured homes.

That said, as MHLivingNews has previously reported, the prior president of NMHOA, Tim Anderson, correctly observed that when there was a steady stream of new manufactured home communities being built, the steady development of new communities coming on line was an important part of the law of supply and demand at work to the benefit of manufactured home residents.  If a manufactured home land-lease resident has a chance to move from one community to another, as often occurs with apartments or rental housing, so long as there is good supply. Limit the supply for whatever reason, and with strong demand, as occupancy rises to at or nearer to an area’s capacity, then rental rates in that area will tend to rise more with strong demand.

Let’s note that even in the early 2000s, when the industry’s downturn meant that new communities weren’t being built at the same pace as previously, some newly developed or expanding communities would offer to pay for the move of a resident from ‘Manufactured Home Community A’ to ‘Manufactured Home Community B.’ Yes, it was expensive for the developer, but that new or expanding community operator, in exchange for a commitment by a resident to stay for a period of time, would make that deal as a cost of doing business and filling their vacant sites more rapidly.

That backdrop helps explain why it is in the interests of manufactured home buyers, community residents, and independent professionals alike to have the maximum number of options for current and prospective manufactured home owners.

Let’s rephrase for greater clarity. More options for current or prospective customers – when those options reflect genuine competition – will tend to keep prices in line.

There are exceptions to the normal working of the law of supply and demand and how that economic principle benefits shoppers and customers.

For example, when businesses with a product or service that people want collude to ‘fix pricing,’ that harms affordability, which is why that practice of price fixing may be illegal under antitrust laws. None of this is controversial, rather, it is basic economics 101.

With that recap of basic economic principles, lets turn to the influential Manufactured Housing Consensus Committee (MHCC).  The MHCC was established by the Manufactured Housing Improvement Act (MHIA) of 2000.  It is designed to protect the interests of the home buyers, existing home owners, and industry members from having the Department of Housing and Urban Development (HUD) from merely imposing their will on the industry without input. Rephrased, the MHCC is a check on federal power. It is also a way to effect positive changes when enough MHCC members believe a permitted regulatory changes may be needed.

On February 14, 2019 HUD’s Office of Manufactured Housing Programs (OMHP) published a list of the members of the MHCC. That MHCC list of MHCC members is linked as a download, here. Among those members is NMHOA’s Dave Anderson.

Anderson sits on the Regulatory Enforcement Subcommittee of the MHCC. A not entirely unrelated peek at subcommittee and their work is found at this link here. In that capacity, Anderson and Cavco Industries Manuel ‘Manny’ Santana voted against DRC 1. For those who don’t know, a DRC is a ‘deregulatory regulatory comment’ that flowed from the Trump Administration’s regulatory freeze and roll back.

Here is what DRC 1 said. 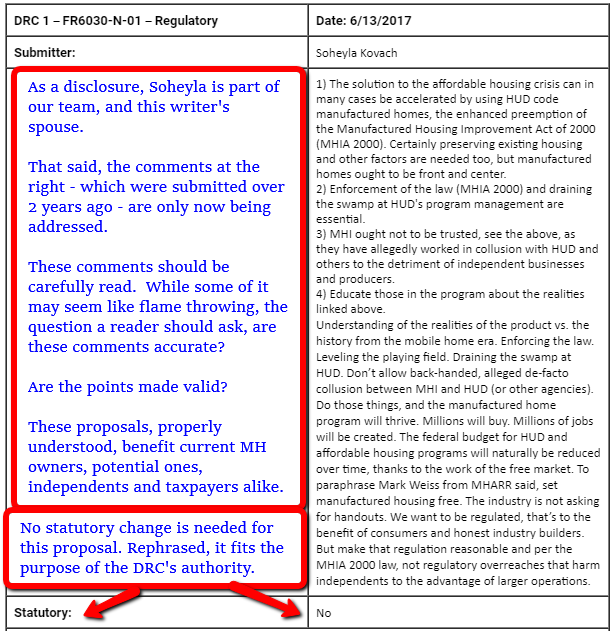 Earlier today, Dave Anderson was asked via email to respond to concerns about that recent MHCC subcommittee vote. Other questions put to Anderson related to possible conflicts of interest were also addressed to him and a NMHOA elected official. MHLivingNews has an incomplete, off the record reply as of this time from a normally reliable source at NMHOA.  That said, we will be happy to publish their response(s) in a future report, and cross link that reply as appropriate.

It should be noted, in fairness to Anderson and NMHOA, that people can make an honest mistake. We’ve done it, others have and can too.

That said, what’s occurred with respect to NMHOA needs to be properly understood as arguably contrary to the interests of their members. How so? Let’s look.

Cavco Industries Joe Stegmayer is the current Chairman of MHI. They are under a cloud caused by the issuance of a Securities and Exchange Commission (SEC) subpoena to Stegmayer and Cavco.  According to MarketWatch, “The SEC subpoena requested records of Cavco’s trading in another public company’s stock, amongst other details.”

Cavco’s Stegmayer, who stepped down as chairman, president and CEO in the wake of that federal investigation announcement, is still working for Cavco. He is still MHI’s chairman.  As we’ve previously reported, several MHI Chairman, for whatever reasons, have been connected with regulatory and legal issues.  See an example below. Another is linked here.

In fairness to MHI, they produced a good video below.  That said, they’ve arguably made this video hard to find.

Manuel ‘Manny’ Santana – also on the same MHCC subcommittee as Anderson – works for Cavco and has clear ties to MHI, and is viewed by many as a de facto MHI representative on the MHCC.

So, on the one hand, NMHOA periodically is ripping – and from their perspective, understandably so – certain MHI member firms for so-called predatory tactics.

Yet, on the other hand, when Anderson has an opportunity to vote for a measure – i.e. DRC 1 – that properly understood could expand options and thus protections for community residents, Anderson votes no? That’s logically problematic.

It must be recalled that MHAction has been documented to be the ‘dark money’ beneficiary of money from Warren Buffett. Like MHAction, NMHOA purports to represent the interests of community residents.  But MHAction has been publicly scolded by former Golden State Manufactured-Home Owners League (GSMOL) President Michelle Smith.  See her comments as part of the report linked below.

On a closing note, it is important to note that most of the problems associated with manufactured home communities (MHC) are often tied to firms that have direct connections with MHI. For more information, see the related reports, below the byline and notices.

Finally, it is important to bear in mind that many who buy a manufactured home live on privately owned home sites.  Many living in communities that are owned by a ‘mom and pop’ operation where the residents and owners have a good relationship. So, a few purported bad actors should not be held against the many who earn an honest living by properly serving their buyers and residents. The resident leader linked here loves his manufactured home and their community, but he is still pressing for a federal investigation of certain problematic practices.

The vast majority of manufactured home community residents, per third party research, reflect a healthy level of satisfaction by manufactured homeowners and residents.  For those shopping, the moral is simple. Research those you are considering doing business with. Look before you leap, and you will likely end up happier as a result. “We Provide, You Decide.” ©

L. A. ‘Tony’ Kovach is co-founder of MHLivingNews and MHProNews. He is a highly acclaimed industry expert and consultant, a managing member of LifeStyle Factory Homes, LLC, and is a 25 plus year award-winning manufactured home industry professional. Kovach earned the Lottinville award in history at the University of Oklahoma, among other academic recognition.