The following from our MHProNews sister site, via a news release carried by EIN and others, largely speaks for itself because it cites the latest facts and figures from federal, university, and insurance sources. During an affordable housing crisis, when some experts are concerned that there could be a housing and/or economic bubble burst – different in cause, but similar in effect to the 2008 housing/financial crash – getting more affordable housing matters to all. That includes current owners of conventional housing, mobile homes, and manufactured homes. Clearly, affordable housing is important to renters too. That affordable housing has to be brought online as rapidly as possible to avoid a bubble burst. At this time, that means all of the above housing thinking is useful, but certainly needed are factory-built housing as the fastest and most proven bet for affordable home ownership.

Following the video below, which is not part of the release via EIN but is part of an illustration and reference.

While the EIN press release lays out differently than it does below, the content is essentially the same.

POINCIANA, FLORIDA , UNITED STATES, January 16, 2022 /EINPresswire.com/ — Facts and claims by officials and mainstream media sources yield several surprising insights useful for affordable housing seekers, housing advocates, public officials, conventional housing owners, as well as mobile and manufactured homeowners. PBS reported on 12.22.2021 that: “the nation [USA] will see more than 3.4 million deaths in 2021.” According to preliminary 2021 data from the National Weather Service (NWS) said that only about 100 people died in “killer” tornadoes. This should be headline news, and it is in a new report on Manufactured Home Pro News (MHProNews). A new article assembles and examines the preliminary data that includes a frank look at reports that examined the tragic killer storms that hit Kentucky and other midwestern states. Per the NOAA/NWS latest data, only 9 of roughly 100 deaths occurred in a mobile or manufactured home. 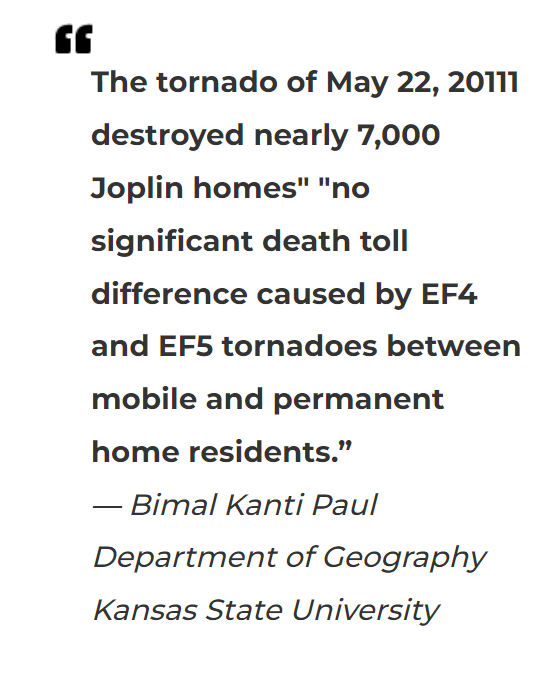 That’s important news for affordable housing seekers, sincere and objective housing advocates, or mobile and manufactured homeowners. It is also a reminder to those in commercial buildings and conventional ‘site built’ housing that only FEMA designated tornado shelters are considered safe during a killer tornado or other intense windstorm event.

The data may surprise millions. Someone is statistically more likely to die by lightening in 2021 than those who died in a mobile or manufactured home hit by a tornado. Per TampaBay, “There were 11 U.S. deaths in 2021 [from lethal lightning strikes], compared to a 15-year average of 36.”

Preliminary National Weather Service (NWS), Insurance Information Institute (III.org) data by month are shown in one of the illustrations/graphics.

To frame this safety issue, it is useful to compare the high death tolls from other causes, compared to the minimal apparent risk that the data reveals for those living in a mobile or manufactured home from a killer tornado event.

According to the CDC’s (Centers for Disease Control and Prevention) National Center for Health Statistics the following are the top ten causes of death in 2020.

Per III.org:
• “On the evening of December 10, 2021, a powerful low-pressure system that lifted from the Southern Plains into the Great Lakes and fueled by record-setting warm temperatures and a La Niña weather pattern spawned about 35 tornadoes across six states and killed about 90 people. Hardest hit was Kentucky, where about 75 people were killed and 26,000 homes and businesses were without power, and more than 1,000 homes were destroyed.”
• “2020 Tornadoes: In 2020 there were 1,075 tornadoes compared with 1,517 in 2019, which was the highest annual total since 2011, when there were 1,691 tornadoes, according to NOAA. In 2020, 76 people perished in tornadoes compared with 42 in 2019.”
• “The costliest catastrophe involving tornadoes occurred in April 2011, when a spate of twisters hit Tuscaloosa, Alabama, and 12 other states, causing $8.5 billion in insured losses in 2020 dollars. The deadliest event in the 2000s was the May 2011 Joplin, Missouri event that took 158 lives.”

Those facts arguably provide objective evidence to the success of the HUD Code manufactured housing program creating durable, safe and affordable housing. Prior HUD Secretary Ben Carson said in a speech about manufactured housing’s important role in solving the affordable housing crisis said this. “On a recent visit to Alabama, I was shown a site that was demolished by massive tornadoes – and the only homes in the area that successfully weathered the storm were manufactured houses. It was a silent testament to their resilience. It is also possible that HUD’s work with industry leaders to update wind Standards for manufactured housing in 1994 could have helped to limit damage and potentially save lives.”

But for those who don’t have a post-MHIA manufactured home, the evidence in the video below suggests that adding proper tie-downs can prove to be lifesaving safeguards in mobile homes and manufactured housing. According to an official examining the Stamping Ground, KY tornado destruction, it was only mobile/manufactured homes that had few or no tie downs that were moved off their foundation. Thankfully, no one died in those storms.

A source associated with the Manufactured Housing Association for Regulatory Reform (MHARR) told MHProNews that the public should understand that a manufactured home is engineered.

While some topics are controversial – example: tornado facts/evidence – third-parties indicate MHProNews is a magnet for public officials, affordable housing advocates, manufactured housing professionals, investors, educators, the public, and others.

Howard Walker, longtime Manufactured Housing Institute executive committee member, said: “The emergence of Tony Kovach’s group of publications has brought a new standard to the [manufactured home] industry. The thorough and unbiased reporting fills a vacuum that has existed for too long.”

MHLivingNews NOTICE: as a disclosure, in the video above, the percentage or ‘odds’ shifts year by year. But the broad point reinforces the data shown above from the National Weather Service, III.org and in the report and additional information found via the linked report and commentary found below. Namely, that the odds are very much in the mobile/manufactured home residents’ favor every year that they won’t be hit by a deadly tornado that take’s their lives. It is usually in the 100,000s of thousands to 1 in the favor of residents every year. Meaning, so long as common-sense safeguards described above are applied, this is not something worth stressing over in daily living.

More From This Source:

We lay out the facts, insights and expert commentary/opinions/views that others can’t or won’t do. That’s what makes our sister site and this location the runaway leaders for authentic information about affordable housing in general, the politics behind the problems, and manufactured homes specifically. That’s a wrap on this installment of “News through the lens of manufactured homes and factory-built housing” © where “We Provide, You Decide.” © ## (Affordable housing, manufactured homes, reports, fact-checks, analysis, and commentary. Third-party images or content are provided under fair use guidelines for media.) (See Related Reports, further below. Text/image boxes often are hot-linked to other reports that can be access by clicking on them.)