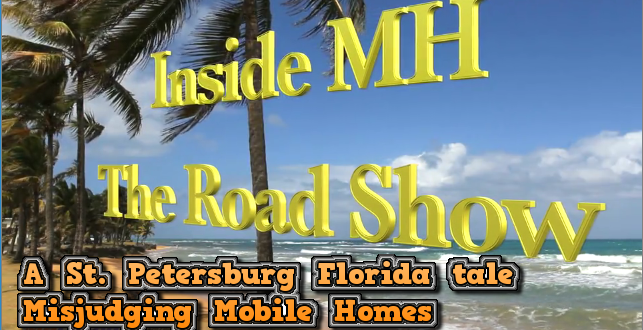 He had a classic car, a classic boat and enjoyed racing, as well as bass flashing. Pat loves to decorate, shop and explore.

A relative inherited a mobile home in Highland Mobile Park, a 55-plus community in sunny St. Petersburg. They asked the Choines to check it out by staying in it for a few days.

When asked about their impression of mobile home living prior to those three days, Pat gave a quick thumbs down on camera.

The Choines began by doing what so many others have done — they judged the mobile home “book” by its cover. But three days in Highland, actually experiencing the lifestyle, was all it took.

They fell so in love with the place, they found a home in that same park and put a deposit on it, intent on making it a winter getaway.

They found when they returned, at the end of the snowbird season, to their fine townhouse in Montgomery, Illinois, they missed their appealing, yet modest lifestyle in Highland.

“I didn’t want to spend my life keeping up with and paying for upkeep on that big place.” Pat said.  “I wanted to enjoy life.”

Taking a cue from the author, Charles Dickens:

Misjudging is part of the human experience.  That person we once thought of as so smug, when seen in a different light, is found to be fun, cool and confident. The boy or girl we once hated in high school becomes a best friend, or even becomes one’s spouse.

Dickens’ famous opening to the novel, A Tale of Two Cities, reads:

The Choine’s experienced mobile homes and MH park living by hating what they didn’t know or understand. It was the extreme view of “trailer trash” that they thought they knew.

Now, they laugh and smile about it.

In this video, you’ll meet the Choines, and you’ll see and hear what turned them around.

A microcosm of America, itself?

Millions are looking for a solution to the high cost and often expensive upkeep of conventional houses. The negative perceptions of mobile home living in Malibu, California have yielded to the trendy makeovers of old mobiles into six- or seven-figure immobile mansions.

In Florida, old mobile homes are made over too, and for a fraction of the cost of buying or building a conventional house; and it saves their owners a tidy sum on property taxes as a bonus.

Before some city managers grumble too much about the tax money they don’t get, the park and community owners pay their fair share on the commercial real estate that comprises the community, which also saves cities on all the upkeep of the park’s infrastructure.

Homeowners, municipalities and investors all benefit. It’s a case of win-win-win.

Some in the manufactured home industry want to bury the mobile homes’ past. Some want to forget or ignore those not-always-so-safe or not-so-well-built older, metal-sided, metal-roof homes on a frame.

Others do what the Chiones did with a classic car — they fixed it up and made it better than new, for a fraction of the cost.

And just as the clunky bag phones of yesteryear became, over time, the sleek smart phones of today, those mobile homes evolved in leaps and bounds, with the passage of HUD-code federal manufactured home construction and safety standards that took effect on June 15, 1976.

Now those seeking the American Dream can get an entry level or a residential style factory-built home, for about half the cost of something comparable built on site.

It’s been 40 years since the last mobile home was built.

Millions have no clue that manufactured homes are so much safer, appealing, energy saving and durable than those mobile homes from the 50s, 60s and early 70s.

Another real surprise is that those manufactured homes are often greener and stronger than conventional housing, at about half the price.

At the same time, too few people shopping for a house realize that those old mobile homes can be bought, get a personalized makeover and become something special for their owners.

The money the savvy Chiones and so hundreds of thousands of others have saved by doing so speaks for itself.

In a 2014 feature story, More Than Just a Box on Wheels, CBS News correspondent Mark Strassmann concludes the report with a rhetorical question to mobile designer Jennifer Siegal:

“So the McMansion is dead? Long live the mobile home?”

The video above starts with a commercial
then has the featured news report by CBS.

You can’t judge a book by its cover. Mobile homes ought to be celebrated, just like classic cars are.  And on the 40th anniversary of the first manufactured homes, which today are built to tough federal safety and construction performance standards, both ought to get a fresh look.

Because they yield an easy lifestyle that millions like the Choines have learned is so appealing. The time and money they saved by downsizing is what allows them to go to more restaurants, more outdoor adventures, more shopping and less stressful living.  It’s become for them and others, the best of times. ##