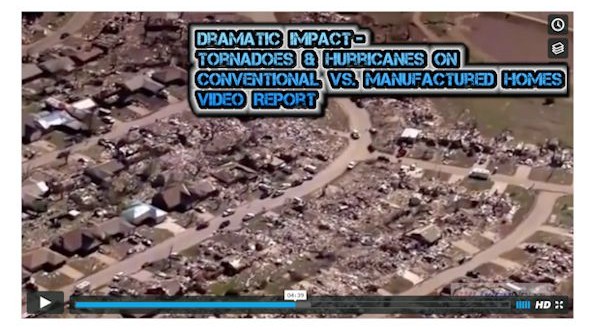 “We see winds getting underneath those structures…those forces are tremendous…”

Spring is a season of great renewal, but it is also a time when windstorms blossom, causing anxiety and fear for millions who live in areas where tornadoes and hurricanes occur. Residents from Florida, to the Gulf Coast and the Eastern Seaboard, brace for the arrival of summer hurricanes, while those in Tornado Alley scan the skies and weather reports for signs of killer twisters.

Every year, TV meteorologists issue dire warnings for people who live in “mobile homes” to flee to — well, anywhere else. How accurate and sound is that advice?

The facts and experiences from experts and storm survivors reveal a reality that is shocking to many. Tornadoes and hurricanes that cause millions to billions in damage can crush a house, building or mobile home, as this video report dramatically reveals, but manufactured homes built and installed to new standards established in 1994 can survive windstorms right next door to older mobile homes or conventional construction that is heavily damaged or destroyed.

The need to update weather reporting ought to be urgent, because some die fleeing a windstorm who may have been safer sheltering in place.

Others should take pre-storm precautions, such as checking if tie-downs – or home add-ons like carports or patio covers – were properly installed or need updates, adjustments and/or replacing.  Note that no one is suggesting that manufactured homes are tornado or hurricane proof.  What the video and the experts alike indicate is that today’s manufactured homes are stronger and safer by design; but the safest place is still an underground tornado shelter. When that’s not available, a windowless room is a good back up safety option.

Legally and for Safety – an Important Distinction

Mobile homes are not the same as modern manufactured homes, despite the fact that people, public officials and the media tend to use the terms interchangeably. This is a distinction that media simply must learn to get right, because lives are at stake when an error in reporting is made or implied.

The era of the mobile home came to an end some 40 years ago. Since June 15, 1976 there have been no new mobile homes built in the U.S., because they were replaced by federally regulated manufactured housing built to strict construction, energy and safety standards administered by the Department of Housing and Urban Development (HUD). Manufactured housing’s performance-based standards are third party inspected. Those inspectors reports go to HUD.  Those standards  are proven to perform as well or better than conventional housing costing about double what a manufactured home (MH) does, per U.S. Census Bureau statistics.

The term manufactured homes include a range of housing from entry-level, shade and shelter dwellings to residential style homes that even look like conventional housing and attract even frugal millionaires. That range should also be noted by public officials, since millions of Americans are seeking quality affordable living in an era when rising rents and ever-higher conventional housing costs are causing a growing crisis in many parts of the country.

Charley, the first and most powerful of four hurricanes to strike Florida in a memorable six-week period in 2004, presented an exceptional research opportunity for the engineers at the Insurance Institute for Business & Home Safety (IBHS), a nonprofit organization that conducts independent research to identify and promote ways to strengthen homes and businesses in the face of natural disasters.

Anecdotal evidence following tornadoes EF2 to EF 5 in strength in the nation’s midsection — aka Tornado Alley — indicated much the same pattern.

When Dr. Tim Reinhold, senior VP of research at IBHS and his team studied the post-Hurricane Charley damage to manufactured homes, they found that 80 percent of the damage sustained was linked to attached structures — carports, awnings, canopies and the like, according to the U.S. Department of Housing and Urban Development (HUD).

These add-ons are typically built to lower construction standards than the homes, and fail at lower wind speeds than the structure to which they’re attached, says Reinhold.

Controlled wind tests conducted in the IBHS laboratory came up with the same results, lending additional insight into building a better “box” than the ones that already were outperforming site-built constructed homes.

But the most compelling insights into where residents should seek shelter in the coming storms comes from those who heeded the warnings to flee their “mobile homes” and later came home to find that their modern manufactured homes had fared better than the ostensibly safer traditional buildings they fled to.

IBHS testing has developed stronger, fortified house standards for conventional on-site builders, which add several thousands dollars in costs and make a conventional house more windstorm resistent.  While NBC News Today Show reported on the findings on manufactured homes surprising durability about 2 years ago, much of the media, public officials and others failed to take notice.  As the need for quality, affordable and appealing housing grows, insights from experts like Reinhold, Rochman and others –  combined with those from State Housing Inspector Becki Jackson, or Bill Matchneer and more – should pave the way to a new understanding of the safety and value of manufactured homes.

What went under-reported when the NBC News Today Show video aired was the report that the two manufactured homes that IBHS purchased for their tests were said to be the least expensive ones in that market.  While one manufactured home with the improper add-on failed, as this video shows, that failures was caused by the improper addition. The manufactured home with the properly installed addition survived, while the far more costly site built house in that same test collapsed, which this video report also reflects.

The lessons learned is that those manufactured homes moving down the highway represent the obvious yet surprisingly more durable construction than most realize.  The next time you see one pass by, you may wonder if it is as eye-catching and attractives as those featured in this dramtic video report. ##

(Photo caption – the top post-storm video still of destruction around Moore, OK and all video credits are shown at the end of the video report, found above on this page).