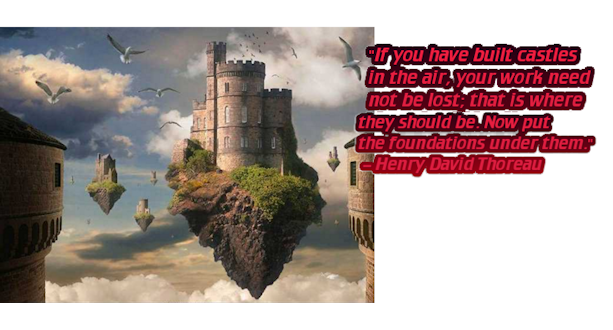 "If you have built castles in the air, your work need not be lost; that is where they should be. Now put the foundations under them." -- Henry David Thoreau. Photo credits - Flickr/ChristCatholic/PoetFreak. Text added by MHLivingNews.

Tired of renting? Get the Scoop on Manufactured Homes

Tucked in a quiet Lakeland suburb, a man who calls himself L.A. “Tony” Kovach is nurturing an enterprise he firmly believes could be the next Google or Amazon or Facebook. Just don’t ask him what the L.A. stands for.

“It’s a secret,” he says. “A conversation starter.”

But it is no secret that what Kovach wants to talk about is manufactured housing. Or that the man many people call “the voice” of the industry pretty much lives and breathes factory-built homes — and has for decades, through good times and bad.

He’s bought them, sold them, marketed them, lived in them and writes about them with the passion and conviction of a true believer.

“We think we’re onto something that’s avant garde,” he says. “The economics of it, the greenness of it, the eye appeal that continues to improve and evolve. It’s just a natural: Manufactured housing is the future, not the past.”

With billionaires like Warren Buffett and Sam Zell investing heavily in the industry, and celebrities like Pamela Anderson, Matthew McConaughey and Minnie Driver moving into upscale Malibu models, Kovach believes he is at the right place at the right time to attend the birth of the next big thing.

“To some extent, we’re influencing it, because some of the research is on our site,” he says. “The government, educators, consumers are on our websites all the time.”

It has been 5-1/2 years since Kovach began pouring his passion into a project that has exceeded even his own lofty expectations, creating two online trade publications that cater to both industry professionals and consumers — the most widely read e-zines of their kind.

“We are the one-stop shop for manufactured housing education, information and inspiration,” he says.

MHProNews, the first of his creations, has been growing in leaps and bounds since it went online in October 2009. The site saw fewer than half a million visitors in its first year.

The site traffic took a huge surge in April, breaking all previous records — which Kovach sees as a sign of growing interest in manufactured homes.

“I think there is a hunger in America for an alternative to high-cost housing, the need for something besides the rentals we see out there,” he says, citing a National Association of Realtors study that found 85 percent of today’s renters want to own their own homes.

April also marked the second anniversary of Kovach’s second brainchild, MHLivingNews, geared to consumers who want to know more about the world of MH.

That publication, which is growing at an even faster rate than its sister publication, features video and print stories about the MH lifestyle, as told by homeowners and industry pros — stories that Kovach says sets his publications apart from the rest.

“No one has ever told the industry stories from the perspective of the people who live in, build and maintain today’s modern manufactured homes.”

Kovach serves as host and interviewer on all of the many “Inside MH Road Show” videos that take him across the country, talking to people in all walks of life who are living the MH lifestyle, be it in a resort community or a rural estate.

Each segment begins with a hearty, broadcast-quality, “Hi, I’m L.A. ‘Tony’ Kovach,” the trademark introduction and hail fellow well-met manner in which he greets everyone from captains of the industry to the waitress who serves him green tea.

When he isn’t producing videos about manufactured housing, he is blogging about them and manning the battlements in an effort to reverse decades of misconceptions about what some people continue to call “trailers.”

The word “mobile home” in a news article is enough to send Kovach racing to his keyboard, where he tracks down the errant reporter and points out that mobile homes ceased to exist on June 14, 1976, when the U.S. Department of Housing and Urban Development ushered in the era of HUD-code homes.

His relentless pursuit of setting the record straight seems to be paying cyber dividends.

“A lot of the subjects we report on are page one, top of fold, on Google,” he says.

The unflagging energy Kovach brings to his endeavors is not lost on those around him, who wonder where he finds the time to feed the engine of two rapidly growing publications. Some wonder when he sleeps.

“Tony will sleep when he’s dead,” quips Matthew Silver, who has written the daily business news and stock report for MHProNews for going on three years.

Kovach insists he does sleep — even if it’s just cat naps between the business of the day and the revelations of the night.

“Even when he’s sleeping, he’s thinking,” says his wife, Soheyla, his full-time partner in the project. “I can see it when his hand is under his chin.”

The Kovachs moved from Chicago to Lakeland with their son, Tamas, now 8, in September 2014.

They loved living in Chicago, but hated the high taxes and long, cold winters. They knew they wanted to live in the South.

“With our work, as long as we have the telephone, high-speed Internet and an airport, we could live anywhere,” says Kovach.

They looked into a number of areas, including Nashville and Tallahassee, but found by process of elimination that Lakeland hit the mark.

“We were looking for a good private school for our son, near a city, but not in a city,” he says. “We’re less than an hour into Orlando and Tampa. Of course, my wife loves to shop, so we’re frequent visitors.”

Not that Soheyla Kovach spends much more time shopping than her husband does sleeping.

While her husband builds castles in the air, it is her job to keep him grounded, he says. It is Soheyla who has helped him build the foundation beneath them.

“When he said he wanted to start the e-magazine, I was kind of surprised,” she says. “I thought it would be a sideline, but I found he was very serious about his blogging every day.”

So, she rolled up her sleeves and learned the technical side of web work.

“I didn’t have any idea — to me it was kind of magic that these things were coming online.”

A passion for learning

“I studied medicine and wanted to be a doctor. That was my passion. I wasn’t even an email person,” she says.

Learning is also her passion and she firmly believes that Team Kovach should know every aspect of their work, even though there are Webmasters paid to take care of much of the technical end of the business.

“If there’s a correction or someone gets sick, we should know what we’re doing,” she tells her husband.

St. Patrick’s Day marked the couple’s 10th wedding anniversary. Ever the practical romantic, Tony Kovach presented his wife with a brand new iMac loaded with Final Cut Pro, so she could learn how to edit the many videos he produces.

“He likes to surprise me in a good way,” she says. “He wants to make his family happy. That’s very precious.”

The biggest surprise, she says, has been the depth and breadth of the project her husband proposed to tackle nearly six years ago.

“We accomplished something big and I learned a lot. It has been a joy.” ##

Jan Hollingsworth is a native Floridian and award-winning writer who specializes in consumer, environmental and agricultural issues.

(Editor’s Note: This article first appeared in 83 Degrees on TUESDAY, JULY 21, 2015 at this link and is reprinted here with the expressed written permission of their editor. While close to a year has gone by, interest in manufactured housing and traffic on the MHLivingNews and MHProNews websites have grown.  So the story remains relevant and hundreds of mainstream media, housing advocacy and special interest websites have picked up various stories published on MHLivingNews. Looking for the most home for your home? Or are you “Tired of Renting? Get the Scoop on Manufactured Homes.”)