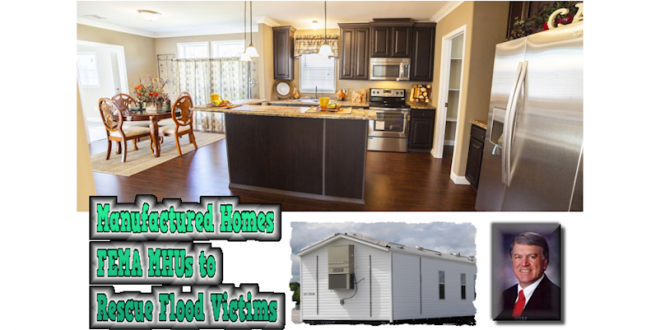 “We have almost unlimited capacity.”

For two days, rain tortured the heart of bayou country, dumping 24 inches in less than 48 hours on southern Louisiana.

It was, says Steve Duke, an event of biblical proportions.

“I was looking for the animals to start pairing up,” he says. “It just wouldn’t stop.”

The 1000-year event flooded more than 100,000 residences, sending families into shelters and the homes of friends, relatives and even strangers lucky enough to still have a roof over their heads and dry floors beneath their feet.

“It’s people taking care of people,” says Duke, who has been sheltering his share of the newly homeless. “That happens to a much greater degree than the government taking care of them.”

Nonetheless, the Federal Emergency Management Agency (FEMA) has waded into the crisis, preparing to deploy thousands of manufactured homes designed to shelter displaced residents until their own homes have been replaced or restored.

These are a far cry from the sometimes toxic, ramshackle “Katrina trailers,” that gained notoriety in the aftermath of the monster storm that decimated the Gulf coast in 2005.

“FEMA’S got their plan and it’s moving and it looks like there’s some thought to it,” he says. “We just tell them, ‘If there’s anything we can do, let us know.’ Our number one goal and objective is to get people out of the shelters.”

The goal was the same in 2005, when Duke grew frustrated as he sat in on meeting after meeting with emergency management officials who struggled to address the tide of humanity jammed into a stadium and other impromptu shelters in the wake of Katrina.

The industry was there to help, he says, and no one was listening to the people who knew best how to produce inexpensive, quality-built homes — fast.

Instead, FEMA scrambled to arrange the construction of thousands of temporary housing units that would come to be known as Katrina trailers.

Very few of these were actual manufactured homes, which are built to standards set forth by the U.S. Department of Housing and Urban Development (HUD).

Most of them were little more than shoddy travel trailers, constructed with sub-standard materials that were later discovered to emit formaldehyde that was trapped inside the small, air-tight boxes that hurricane victims came to call home — if only temporarily.

“The FEMA trailers that were slapped together weren’t even built to RV standards,” says Duke. “No wonder they had problems.”

FEMA has “upped their game” tremendously since then, he adds.

Thousands of newly minted Manufactured Housing Units — known as FEMA MHUs — were at the ready in Selma, AL, the southeastern staging area, when the floods inundated Louisiana.

Thousands more have been contracted to be built by manufacturers who met an August 24 application deadline.

All of these new-style FEMA homes are constructed to exacting HUD-code specifications, designed to withstand local wind force criteria;  these will be anchored on piers, not rolled into yards and left there, on wheels, as were the Katrina trailers.

These are, in fact, bonafide manufactured homes, not trailers or mobile homes — a term that applies only to pre-HUD-code homes built prior to 1976 — a fine point that is widely missed in media reporting.

The HUD code calls for both anchoring and construction standards that conform to the designated wind zones of the region — something that was not even considered with the Katrina trailers.

“We’re really focusing on safety,” he says, noting that “people who have lost everything in a disaster,” living in unfamiliar, temporary quarters, are especially vulnerable to accidents — particularly fire.

The HUD code not only makes manufactured housing less prone to fire, according to some studies, FEMA upped the ante in the MHUs with fire detection sprinklers, which are not found in most site-built homes.

There are also smoke detectors, as well as strobes placed throughout the interiors for the deaf and hard of hearing.

Federally inspected, rigorously secured and manufactured to a strict HUD code — by all accounts, these are a far cry from the transitional housing employed after Katrina.

Plenty of help is needed.

The number of homes damaged or destroyed is well over 100,000 and in that part of Louisiana, 20 percent of the housing stock is manufactured homes.

That means MH factories may need to churn out 20,000 homes — or more — to replace homes lost in the disaster — in addition to the thousands of desperately needed MHUs that FEMA requires to provide flood vicitms with safe, secure temporary housing.

Alabama-based Sunshine Homes has opted to focus on keeping its Louisiana dealers stocked with inventory and has not applied to manufacture the transitional MHUs.

“We anticipate our normal business in that market to be — unfortunately — spectacular,” says Sunshine president and CEO John Bostick. “I believe our Lafayette retailer is going to call and say everything is sold.”

Bostick says he can supply them with high quality move-in ready homes within a month.

“We have almost unlimited capacity,” he says. “Our factory is running at about two-thirds capacity. We could stretch and build a lot of homes.”

Retailers and manufacturers that supply Louisiana are gearing up for a monumental effort to meet the almost unprecedented needs of the people of coastal Louisiana.

“The great thing about the people in our industry: A lot of them have lost businesses and homes and are already back trying to help people,” says Duke.

“It’s a slow process, but a lot of our guys were trying to figure out the very next day how to get back to work, even though they lost everything.” ##