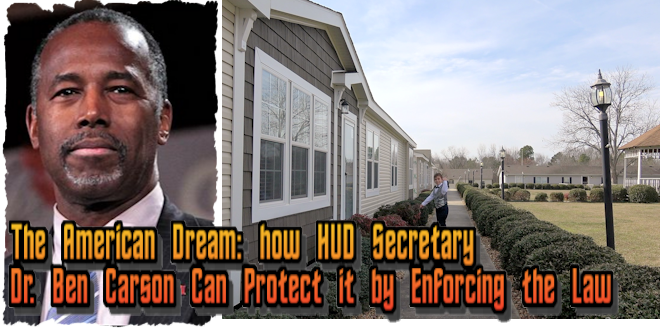 American Dreamers and HUD Secretary Dr. Ben Carson; How Millions Could Win by Enforcing the Law

The American Dream has long been defined as including home ownership.  While there are several positive economic signals in the early weeks of President Donald Trump’s Administration, it will take some time for millions to see their incomes go up enough to allow them to do what most of their parents or grandparents achieved – a home they could call their own.

Or is there a faster, better way – one that doesn’t require years of waiting?

Are there solutions for those who are tired of burning cash in rental housing?  Or a smarter option for those who already own a home, but who want to upsize or downsize their housing?  How about those like frugal millionaires MHLivingNews has featured previously – savvy souls who want to save – but who don’t want to sacrifice on quality?

Stan Dye believes there’s a free market solution to these and similar challenges.  He and his team are teaching that solution, one-at-a-time to shoppers who visit his appealing model home village location.

see the contemporary residential-style models (see video).  It’s those residential-style homes that routinely attract customers who may have sold a conventional house and can pay cash, or who may already have years of building up a great credit history that makes becoming a homeowner pretty easy.

Dye told MHLivingNews that some 70% of his buyers have previously owned a conventional house. If those shoppers see an entry-level manufactured home before they see the upscale residential-style models, then they may get the wrong impression and become “turned off.”

Dye emphasized that those entry-level homes are a good thing and necessary for millions.  But millions of others can afford to pay extra, get the upscale features found in a modern residential-style manufactured home, and still save about half the cost of conventional construction, per U.S. Census Bureau statistics.

Dye is the principal at award-winning Star Homes in Cullman, Alabama. All told, he’s been in manufactured housing for about three decades.

“The average age of our shoppers is around 50,” says Dye. While they have a number of first-time home shoppers weekly too, most have already owned a ‘site-built’ house. They know what they’re looking for in terms of quality, durability and eye appeal, Dye explained.

So with the affordable housing crisis spreading, Dye is among thousands of professionals who believe that the federal government already has a free market solution to the challenges.

Dye believes that HUD Secretary, Dr. Ben Carson “absolutely” should be enforcing the enhanced preemption required by the Manufactured Housing Improvement Act of 2000.

Dr. Carson – like his predecessor, Julian Castro – has indicated he sees value to manufactured homes as an important part of the affordable housing mix of America.  So there are several reasons to be hopeful, as the video notes.

While acknowledging his view that private subdivisions have the right to establish covenants to restrict housing in their development to meet various size or other standards, Dye explains it’s an entirely different matter when a municipality simply ‘zone out’ all manufactured homes. Under existing federal law, that should be illegal.

This is where he and others believe the federal government ought to step in and enforce the law. The Manufactured Housing Association for Regulatory Reform (MHARR) restated their long-held and similar view recently.

Several mainstream media highlighted the overlooked affordable housing option of manufactured homes in 2016. Among them was Bloomberg, Realtor.com, HousingWire and Fox News. The message seems to be gaining traction, and homeowners like those that Dye’s company serves are among the reasons why older stereotypes may finally be giving way to the new manufactured home reality. ##

By Soheyla Kovach for MHLivingNews.com.

Preface. As a disclosure, this writer has spent about half of my adult life living …