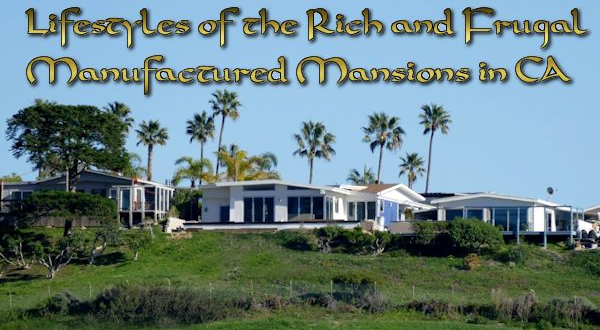 Opulent, customized factory-built homes offer huge savings and an attractive alternative to rebuilt Malibu "trailers" (like the one in the center), as pending legislation seeks to close a tax loophole.

Lifestyles of the Rich and Frugal: Manufactured Mansions Take Their Place in the California Sun

Malibu, CA — When does a “mobile home” get snapped up for a cool $4 million before it even hits the market?

Answer: When it occupies a piece of rent-controlled real estate along the most desirable stretch of coastline in California.

Welcome to Malibu, where three communities offer a beach house lifestyle for a fraction of what folks pay for standard site-built homes in the famous, dollar-drenched zip code.

“Just because someone has a lot of money doesn’t mean they’re not frugal,” says Jess Maxcy, president of the California Manufactured Home Institute.

But there may be changes in the wind for many of those who flock to these well-known celebrity hideaways, as a bill that closes a tax loophole in state law winds its way through the California Legislature.

Invariably, the reports about these storied communities in Malibu call them “trailer parks” and the structures are called “mobile homes.”

In places like Paradise Cove, where in 2014 Stevie Nicks dropped a record-setting $4 million on a three bedroom abode, the terms are worn by residents and park owners alike as a badge of honor, perhaps to lend a Bohemian air to what Vanity Fair once called “the hippest neighborhood in Malibu.”

But there’s something else that may appeal about the terminology: Under current law, the six- and seven-figure homes in these parks, if they were purchased new prior to 1980, pay vehicle license fees — the same as a car, a truck, or an RV — instead of property taxes.

These, as far as the state tax code is concerned, are mobile homes, the last of which rolled off the assembly line in 1976, when the U.S. Department of Housing and Urban Development (HUD) instituted a stringent, uniform code for manufactured housing.

But these tricked-out homes are anything but mobile, with extensive upgrades, additions and rebuilds that make them indistinguishable from the traditional Malibu beach houses that sell for 10 times the price — even without the incredible bluff-top views that draw rich and famous residents like Minnie Driver and Pamela Anderson to Paradise Cove.

Anatomy of a Rebuild

Case in point: Space 184 Heathercliff Road in Malibu’s toney Point Dume Club, home to many 1970s model mobile homes that have been re-invented as — well, something else.

The vintage mobile home was stripped down to four pieces of steel I-beam and the piers beneath it.

With re-construction nearing completion, the 2 bedroom, 2 bath trailer has been transformed into a palatial 3 bedroom, 4 bath beach house, with Viking appliances, an “enormous pivoting glass front door,” a walk-in master closet with chandeliers and fingerprint scan lock — and oh, so much more.

Sotheby’s International Realty reports the home is currently under contract “as is.”

The “taxes” on the property — which, as a pre-1980 home qualifies under current law for a vehicle “in-lieu” registration fee: $17.

Needless to say, if the home was taxed as a post-1980 HUD-code manufactured home, or a site-built home under the California building code, property taxes would be quite a bit more — like almost $16,000 more, or 1 percent of the selling price.

“It’s only happened in these really high-end parks on the ocean,” says Maxcy.

That kind of lost revenue (times hundreds of rebuilt Malibu trailers) is what prompted the Los Angeles County Tax Assessor to ask state lawmakers to close the loophole that allows trailers-turned-mansions to be taxed as vehicles.

California Senate Bill 434, the Mobile Homes Act, seeks to transfer pre-1980 mobile homes to the counties’ property tax rolls when local assessors find that the home has been “rebuilt to the substantial equivalent of a new residential structure.”

What constitutes “substantial” has yet to be defined in the bill, which has been floating through legislative chambers since last year’s session.

Under the current version, homes that have been rebuilt prior to January 1, 2016 will be grandfathered at their existing tax status.

New rebuilds going forward would be subject to the new legislation, if passed.

That doesn’t mean the so-called trailer parks won’t continue to be a great option for the frugal millionaire.

Maxcy, who has more than half a century in California’s manufactured housing scene, suspects that many new buyers, rather than sinking hundreds of thousands into a rebuild, may opt to buy one of the older homes, haul it out, and replace it with a brand new high-end bona fide manufactured home.

“That will still be a very good deal,” he says.

The luxury manufactured home market offers well-heeled buyers up to 3,000 square feet of living space and custom features that give the million-dollar Malibu rebuilds a run for their money.

A multi-section manor with cathedral ceilings, fireplaces, rich paneling, walls of windows, marble spa tubs and showers, wood floors and stone counter tops, can be had for a fraction of what folks have been paying to tear an old mobile home down to the I-Beams and build it back up.

These luxury HUD-code homes come with all the benefits of more modest models.

From a construction standpoint, studies have found HUD-code homes to be as much — or more — fire-proof and wind-proof than comparable site-built homes.

And there are still substantial tax breaks, though not in the realm of the $17 vehicle registration fees that are about to become history for new buyers.

The homes cost much less to begin with, and will be taxed accordingly. And because the majority of homes are in so-called “trailer parks” where the land is leased, homeowners are taxed for the structure only, with the park owner paying the taxes on the land it occupies.

The parks themselves offer substantial savings, even without the property tax break most residents with rebuilt pre-1980s homes now enjoy.

Paradise Cove, the most celebrated — and celebrity intense — of Malibu’s three MH communities, started out in the 1950s as a weekend trailer park, where celebrities could chill out and party along the most popular stretch of beach in Malibu.

Its popularity has only grown over the years, with prices starting at $500,000 for a small trailer — when one can be had. The listings are few and far between, snapped up almost as soon as they hit the market.

As one real estate agent put it, even Stevie Nicks’ $4 million purchase in Paradise Cove is “a deal” compared to the $20 million to $50 million homes a few hundred yards away, outside the park.

“Nowhere else in Malibu are you going to get this kind of view, a quality home worthy of the cover of Coastal Living Magazine, and beach access to the best beach in all of Malibu,” wrote agent Mike Gardner in his Malibu blog the day the home came on the market.

“In general, these places require minimal maintenance, your water is included and you won’t need to worry about an $80,000 septic system that most homes have in Malibu,” wrote Gardner. “A $4 million (traditional) beach house on Malibu Road will easily run $60,000 to $80,000 a year in taxes and maintenance and another $100,000 to $300,000 if your septic needs replacing.”

Thus, the lifestyle and financial savings in the land-lease parks will remain a powerful draw, even if the property tax loophole is closed by the state Legislature this session.

Even if the law is not changed, permits for complete rebuilds are no longer being issued by the California Housing and Community Development Agency.

Having lost the tax advantage of a rebuild, more new buyers may turn to high-end manufacturers like Hallmark, Silvercrest and Karsten Homes, which have carved out a niche producing custom manufactured homes that offer the same crown molding, Carrara marble, hardwood floors, and other fine details found in the rebuilt Nicks home — for quarters, if not pennies, on the dollar.

“If money is no object, we can even change roof loads, add extra earthquake bracing and solar prep,” says Todd Su, president and CEO of Advantage Homes.

The San Jose-based retailer has 13 locations around the state and has been customizing manufactured homes for 23 years.

“Anything you can get in a (multi-million-dollar) Toll Brothers or KB Home, you can get with a manufactured home, as well,” says Su.

And you can get it very quickly.

“You can get a custom home built at the factory in four to six weeks and assembled on the property in less than 30 days,” he says. “You can actually be into the home in as little as 60 to 90 days.”

That’s a huge draw for the techies of Sunnyvale, in the heart of Silicon Valley, says Su, where “townhomes go for about a million dollars — with shared walls.”

A custom manufactured home in one of the area’s amenity-saturated land-lease communities runs a third to half that amount.

“They basically build the home of their dreams from scratch, and don’t have to compete in the bidding process for existing homes,” he says.

High-end custom manor homes are also an increasingly popular choice for people who own their own land.

“We have sold some very, very expensive houses that people have put on large estates,” says Maxcy.

Su says his highest priced custom home sold for around $700,000.

Still, the average price paid in California for a custom manufactured luxury home is less than half that, according to Maxcy’s institute. 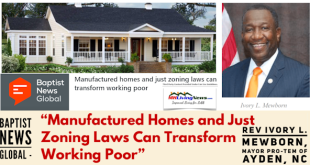