It is another tragedy unfolding before our eyes. But it is also one that growing numbers are being forced to live.

More Americans – who once owned or rented – are now living in their vehicles. Even before the COVID19 crisis began, with then then-booming economy, over 500,000 Americans were on the streets, in tents, or were otherwise living in irregular housing, per HUD. This impacts many indirectly who are not personally experiencing homelessness or the need to live in alternative shelter, as the Seattle is Dying report documented.

While most of the videos that are posted below are by those who are trying to ‘make the best of it,’ that too tells a sobering tale.

A mobile or manufactured home might seem like a dream come true to them now, if they could afford it.

But instead, thousands are trying to make the best of it. They do so from their current precarious perch of living in a vehicle without normal cooking, bathroom, or other ‘basics.’

Zero Hedge is among the media outlets that has described this growing and troubling trend of living in vehicles because people can not afford traditional housing. Their report was entitled, “Modern Day Nomadic Americans Who Can’t Afford Housing.”

Perhaps they would welcome the push for the Great Reset. Perhaps that is part of the point?

But if they take they time to learn why they are in the predicament that they find themselves in, perhaps they might wisely reject all that their new feudalistic masters have thrust them into.

What’s happening in America is happening elsewhere too. Do not make the mistake of thinking that this could not happen to you. It is happening to people just like you.

Sure, some will try to make the best of their scenario. Some like those videos on this page are even making some money by posting on a YouTube channel their experiences. They get a tiny slice of the ad-driven video views. But if they had a reasonable choice, would car or van living be it?

The video below has had 4.1 million views. While the ones above are all posted in recent weeks, the one below is from 2017.

This is not a time for ignorance. The topics that Robert F. Kennedy Jr. – from the political left – has raised, or the Rutherfords – from the political right – raised fit well into the contentions that MHLivingNews and our MHProNews sister site have spotlighted for years. Ignoring these trends will not make them go away. 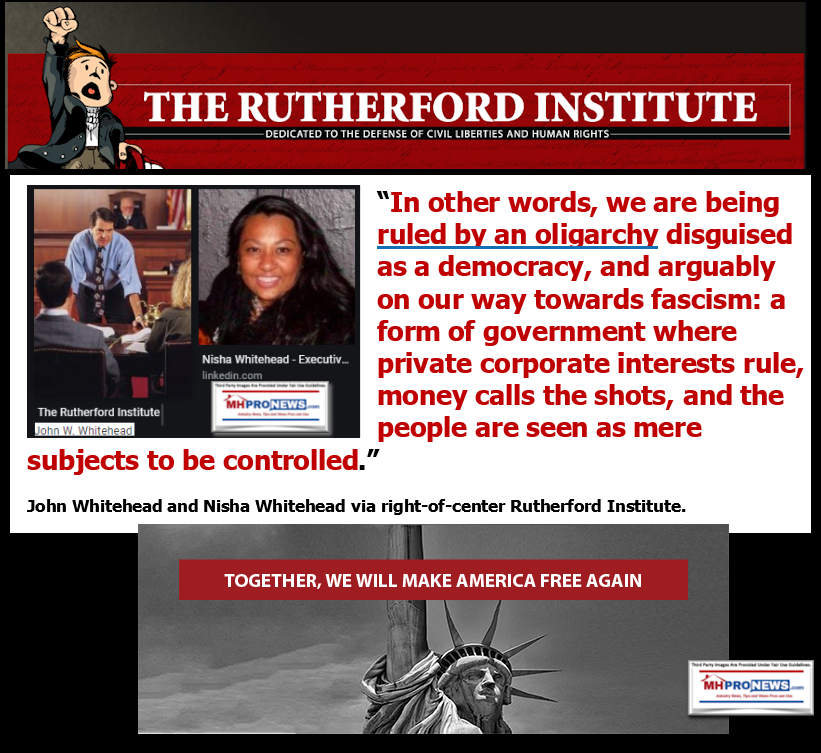 This is the time for study, deep reflection, prayer, to be followed by informed action.

It is not a mere quip to say that it is always darkest before the dawn. The great awakening may be upon us.

See the linked reports. Please read them thoughtfully instead of skimming them.

Then, stay tuned for what’s next. Because even good information is only half of the story.  There has to be a plan and proper action that is based upon the reality that is grounded in accurate information.

Let’s close with two videos that have a brighter note, because manufactured homes have long been the proven affordable housing solution.  That is why the Alan Amy and others think that the billionaire class are gobbling them up.

Long time readers here? You know the drill. There are more reports linked below the byline and notices. Newcomer? Below are some related report, the last one of which was posted several months ago. That last linked report is still the runaway most accessed report here on MHLivingNews. That is saying something, because this site gets several million unique visits a year. That one report is getting about a quarter million hits a month. If you have not yet seen it, check it out. “We Provide, You Decide.” © (Affordable housing, manufactured homes, lifestyle news, reports, fact-checks, analysis, and commentary. Third-party images or content are provided under fair use guidelines for media.)

George Orwell wrote about the dystopian fictional world of Double Speak. In the classic novel …