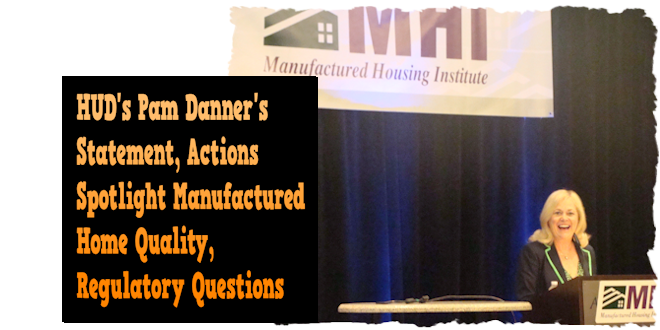 A statement by HUD’s manufactured housing program administrator, Pam Danner, JD, to the Wisconsin Housing Alliance (WHA) became a hot topic of conversation during and after a recent gathering of industry professionals in San Antonio, Texas.

Danner reportedly told the WHA that nationwide, there were fewer than 30 manufactured home buyers that went to dispute resolution.

Another Washington, D.C. metro source that investigated told ManufacturedHomeLivingNews that there were only 13 claims that went to dispute resolution for the year.

Bill Matchneer, J.D. – a previous administrator for the HUD Code manufactured home program, told MHLivingNews that a miniscule number of consumer complaints going to dispute resolution has been the pattern for several years. Matchneer was interviewed by Inside MH, to see that video interview, click here.

Are quality and satisfaction a matter of sheer luck, or is it due to manufactured home program and production design?

That’s the mirror image of a study MHLivingNews reported which revealed manufactured home buyers are overwhelmingly satisfied with their purchase (click the image, linked below).

Those facts being true, why did Danner and HUD spend federal tax dollars essentially advertising for people to lodge complaints against manufactured housing builders, sellers, and installers?

“That’s Washington,” a D.C. based official said. “They can’t believe that the quality and satisfaction with the homes produced by the industry are that good. They thought if they advertised for complaints, they’d get many more. They were in shock at HUD at the minuscule numbers of dispute resolution complaints.”

These facts mean that in 2016, manufactured home buyers had a 99.9998397041 percent chance – nearly 100 percent – of having service or other quality issues satisfactorily resolved.  That’s an amazing outcome for homes that the U.S. Census Bureau research states are about half the cost of traditional, on-site construction.

For those who know that a modern manufactured home is highly inspected, it should come as no surprise. 3 bullet points explain why.

What those bullet points demonstrate is that manufactured homes are routinely more inspected than traditional, on-site construction.

“At a time when those manufacturers are producing their best homes ever – as demonstrated by minimal dispute resolution program referrals — the program continues to lavish funding on entrenched contractors for make-work activity that needlessly increases home prices while providing few or no benefits for consumers,” M. Mark Weiss, President and CEO of the Manufactured Housing Association for Regulator Reform, told MHLivingNews.

“MHARR, therefore – and particularly with a new Administration in office that has pledged to roll-back wasteful, unnecessary and destructive regulation – has begun to evaluate and advance tighter controls on such [unnecessary] expenditures,” Weiss said, “including, but not limited to, possible cutbacks in funds appropriated for the program.”

Dr. Ben Carson to the Rescue?

Will incoming HUD Secretary, Dr. Ben Carson, clean house at HUD’s manufactured home program, and “enforce the law” on issues such as enhanced preemption mandated by the Manufactured Housing Improvement Act of 2000?

In the midst of the widely-publicized affordable housing crisis in the U.S., such facts ought to cause media, public officials and quality affordable home seekers to take note and act appropriately. ##

Submitted by Soheyla Kovach to MHLivingNews.com.

Share
Previous Container-MODs Once Moved Cargo, Will Now Provide Homes for Veterans
Next Habits to Make or Break for a Cleaner, Healthier Home