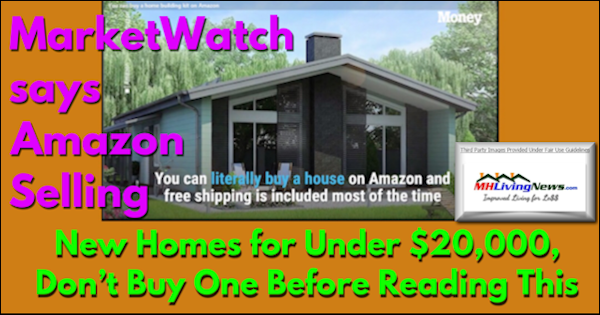 MarketWatch says Amazon Selling New Homes for Under $20,000, Don’t Buy One Before Reading This

First, let’s make it clear that there are all kinds of reasonable and good housing options. This publication is broad-minded about all safe, legal, and legitimate housing options.

That said, Amazon has made headlines recently with some of their kit homes. What are those?

Kit housing has been around for about a century that we know about, because the old pre-Internet Sears Catalog sold them in the early 1900s. They are precut or prefabricated components, awaiting assembly.  There are examples of those old Sears kit homes still around, as the first video below reflects.

Fast forward to 2018 or 2019, when the next videos were produced. Amazon is selling online kit – DIY – or Do It Yourself housing, with ‘free shipping’ often included. MarketWatch and others are running stories about new homes starting from under $20,000, ‘free shipping’ included. Some of those models actually cost over $100,000 — and are still DIY.

But what isn’t included – sometimes less obviously – in DIY kit homes from Amazon or anywhere else is what requires the:

That’s arguably why these online kit sales have not taken off in the big way that many might imagine during an affordable housing crisis.

That said, let’s share some videos, with those facts clearly understood.

To demonstrate just how understated those kit prices are, consider this next video of a container house – also on Amazon, but far more complete than the DIY kits – which in their case starts over $20,000 plus shipping, for a mere 160 square feet. That container home still requires connections, a foundation, permits, zoning, etc.

So, the MarketWatch story, while it could be technically accurate, may not be painting a complete picture.  The House Beautiful video gives a bit more of a complete picture on cost range for these kits.  The lesson?  If it sounds too good to be true, start digging deeper.

Now, let’s look at what Realtor – a website for the National Association of Realtors – had to say about these DIY kit houses from Amazon.

Compare that to the Manufactured Home Alternative?

By contrast, someone can buy a HUD Code manufactured home that is already built, and which also typically requires a foundation, installation, and utility hookups.  But with those items, the home itself is typically complete, awaiting proper installation.

A manufactured home has also been third-party inspected, is certified, comes with a full warranty, and has serious consumer safeguards not found in other forms of housing.

The cost per square foot is routinely lower on a manufactured home than any other form of new housing.  A manufactured home is usually significantly less when all of the costs are factored in. The video below quickly walks someone from the evolution of the trailer house, to the mobile home era, and then into manufactured homes, which were first built on or after June 15, 1976.

Its a fair question. The answer is logical. Because products going into the manufactured home are purchased in bulk and built on a labor and time saving assembly line.  Just as your car costs less when you buy it from a factory, instead of having it built one part at a time in your driveway, so too manufactured homes save time, money, and labor costs, without cutting corners.  That’s what federal certification achieves.

There is plenty of buzz these days around tiny houses, which may attract millions of video views, but may result in only a relatively few tiny house sales.

Why?  Because the reality of a tiny house that isn’t a HUD Code manufactured home requires significantly more effort that the tiny house video stories often paint.  Financing, zoning, and placement may all be issues with many tiny houses, because they are often built to no code. See the related reports, further below.   While that is changing in some areas, the hurdle is one you should investigate before spending a dime.

Meanwhile, for over 4 decades, manufactured homes have been providing affordable ownership that has attracted the frugal millionaires as well as the working class, retires, and millions of others in between.

To learn more, see the related reports, posted further below. “We Provide, You Decide.” © ## (Lifestyle news, commentary, and analysis.)

Affirmatively Furthering Fair Housing, a Novel Yet Proven Solution to the Affordable Housing Crisis That Will Create Opportunities, Based Upon Existing Laws

FEAR, a Solution to the Affordable Housing Crisis, and the Manufactured Home Dilemma