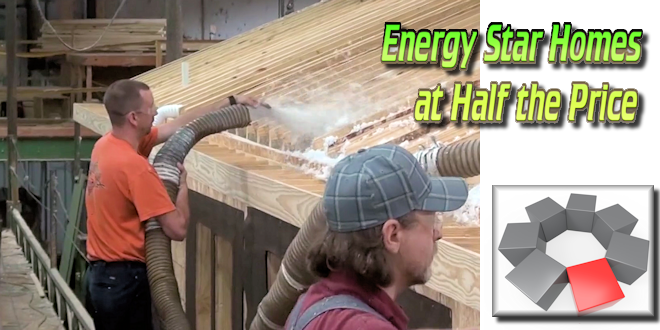 Still from an Inside MH video, produced by MHLivingNews.

“We recently did an audit of where we stand year over year, and we are up at a rate about double that of the industry’s growth,” said Stan Posey, sales manager at Sunshine Homes. “2016 was up about double the growth rate of the industry at large over 2015. So, the home buying market is responding positively to the residential style, Energy Star rated homes we produce.”

That fact was underscored by award-winning manufactured home retailer Stan Dye, who was interviewed recently by MHLivingNews.

Dye said that most of their customers were average age of 50, and some 70% of them had first owned a conventional, ‘stick built’ house. Those buyers recognized the quality and value in the residential style and quality of the Sunshine Homes product, or that of others builders of residential style manufactured housing.

Interviews with Dye’s customers revealed their satisfaction – and joy – with their decision.

Dye noted on and off camera that the industry has always served the entry level, “shade and shelter” buyer. Manufactured housing ought to continue to serve that market, he said, because no one else today could produce entry level housing that allows buyers to get on the rung to home ownership and financial success.

But Dye stresses that too many think that is the only kind of housing manufactured home builders offer.  That’s simply not the case, as the residential style homes shown in the videos on this page demonstrate.

HUD Secretary, Dr. Ben Carson, recently said that home ownership has dropped during the past decade. That concerned him, because Carson saw that the single most important factor for household wealth creation was home ownership.

Those who owned a home had about $200,000 more household net worth, while renters have only $5000 average net worth, Carson said in the video interview shown on this page.

Time will tell how Dr. Carson will deal with the HUD Code manufactured home program. Carson has said during his confirmation hearings that he saw the need and value of manufactured homes in rural areas.

But does he see the application and importance for manufactured homes in cities and towns too?

“The road to our industry’s recovery has been a slow and steady one,” said John Bostick, President of Sunshine Homes.

“But look at what we’ve collectively learned from the past times of trials and errors. Independent builders, retailers and communities are producing and providing the best products and services that the manufactured home industry has ever offered,” he said.

“We rival site building and a fraction of the cost,” said Bostick. “With the affordable housing crisis, the timing couldn’t be better for the nation to discover what factory built homes truly are today.”

Bostick then pointed to HUD’s own PD&R research that was reported on MHLivingNews.

“That study that HUD commissioned – which was done by independent, university researchers – demonstrates that manufactured homes are a great option for municipal infill,” Bostick said.

“In Japan, the land of engineers, they get it that factory-built homes are desirable and superior. They use factory home building in Japanese cities and towns, not just in rural areas,” Bostick explained.

“Here in America, by embracing the law as provided under the Manufactured Housing Improvement Act of 2000 (MHIA 2000), we could be providing the homes that realtors need to meet the demand for housing under $200,000.” Sunshine’s president said their rapid rise in sales is proof that the market is responding to the residential style manufactured home product.

“We could be producing those quality, appealing and affordable residential style HUD Code and modular homes that Millennials, retiring Boomers and all other generations want and need,” he stated. “Manufactured home producers can do that, while protecting and increasing property values. HUD’s own researchers prove that point!”

Lindsey Bostick (photo below) is learning the industry from the ground up in the family owned business. She also made the conscious decision to invest in her own residential style, Energy Star rated Sunshine Home. Many of her comments, about the green appeal, lower cost and higher value are noted on the video on this page.

Posey mentioned that Sunshine’s residential style homes was causing factory employees, professionals like doctors and engineers, and those of modest means to millionaires to buy their homes. “Seeing is believing,” said one of their upper middle class customers in a video on this page.  A video interview with an engineer and his professional wife, is shown below.

“I recall the heady days of the end of the mobile home era,” he said.  “While there were good builders back then, there were enough problematic ones that landed a few companies who didn’t build to proper standards negative media reports.”

“That negative press hurt all of us in the old-pre-Code mobile home industry.  It was the pressure of responding to those old media accounts which led the industry to embrace federal regulations, as a safeguard for both consumers and good, honest factory homebuilders.”

“Today, a home buyer knows that if he’s buying the least expensive HUD Code manufactured home out there – which we don’t build, but others do – they still have to meet basic energy, safety and durable construction standards.  That’s good for home buyers, and for the industry.  It’s a win-win,” the company president said.

“Those federal standards are so good, and between plant, third party inspectors working on behalf of HUD, and state level installation inspections, the consumer know they are getting a quality home at a great price – often half the price of conventional housing – per the U.S. Census Bureau statistics,” he said.

“Tony [Kovach], what you, Mark Weiss and Danny Ghorbani at MHARR did with that

engagement of those Michigan State University professors and their tornado research was so important to our industry,” said John Bostick.

“Because it spotlighted how mixing ‘mobile home’ statistics with manufactured home realities should never be done by researchers, public officials or the media,” he said.

“Having MSU Professor Mark Skidmore say on-the-record that manufactured housing quality is great and an important solution for America, that ought to be front page headlines.  We are the solution to the affordable housing crisis.”

“The industry has to be part of the solution in education of the public, media, researchers and public officials,” Lindsey Bostick said. “We’re proud to be part of the MH Alliance that supports those educational efforts that makes manufactured homes the clear solution for millions of Americans who are looking for that quality, affordable home.”

“People live better when they have less financial stress,” she says.  “They can do more of what they really want to do with their lives when they pay less for their home.”

Lindsey explained that, “I didn’t sacrifice by buying a manufactured home, I’m money ahead.  The intelligent, informed professionals, business people, builders, real estate agents and others who are buying and selling manufactured homes are proof that the industry has evolved.”

It is worth noting that her father and others at their company own and live in a residential style, factory-built homes too.

As Alan Amy told MHLivingNews, people walking into the home, touching, feeling and seeing the modern quality for themselves makes the difference. ##

(Image credits are as shown above, and when provided by third parties, are shown under fair use guidelines.)

Submitted by Soheyla Kovach to ManufacturedHomeLivingNews.com

Share
Previous Introducing ÖÖD – $50,000 Mirrored PreFab – and Compare
Next At Death, What do You do with a Mobile or Manufactured Home?