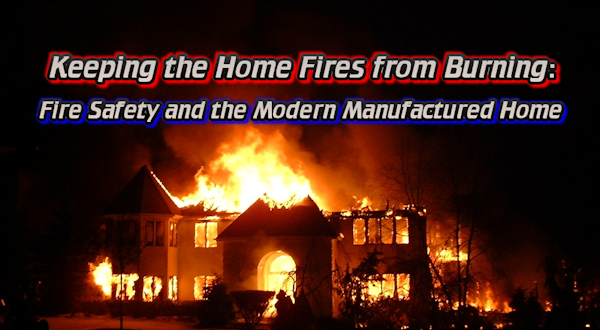 Fires in housing of all prices and types often increase during the winter months. Conventional house ablaze, photo credit, Genius-com.

Keeping the Home Fires from Burning: Fire Safety and the Modern Manufactured Home

Studies show that manufactured homes built after 1976 are more fire-resistant than comparable site-built homes — but no residence is completely fire proof. Here’s what you need to know to reduce your risk, as we enter the winter fire season.

By Jan Hollingsworth
For MHLivingNews

It was apparently an attempted case of “spontaneous combustion,” a phenomenon thought to be caused by the friction between mortgage papers and a homeowner’s desire for a quick exit from debt.

In this case, the lady of the house placed a trash can full of combustibles in the coat closet of her well-appointed home, then topped it off with an equally combustible wool sweater.  She struck a match and closed the closet door, having neglected to consider two key factors:

The result:  smoky coats, broken glass where the fire fighters crashed through the living room window and damage from water used to douse the smoldering mess.

While the failed inferno may have been a source of amusement for those who recognized the woman’s folly, fire is serious business, and finding ways to reduce the risk, while maintaining affordability, has been a work in progress, four decades in the making.

Smoke alarms, escape windows, flame-resistant wall coverings and stringent construction standards required since 1976, when the U.S. Department of Housing and Urban Development (HUD) transformed the infamous tinderboxes of old into today’s durable factory-built homes, have had a dramatic impact in reducing the risk of fire.

What’s more, the new standards have given manufactured homes a leg up on their site-built counterparts.

Numerous studies, including the 2013 NFPA report suggest that post-HUD Code manufactured homes can be more fire-resistant than comparable conventional homes.

Today, the International Residential Code (IRC), which governs site-built one- and two-family structures, and the HUD manufactured home standards, are virtually identical, says Martin Montgomery, a Texas-based engineer whose company, RCS Enterprises, inspects the installation of manufactured homes in Texas and Oklahoma.

“The materials used are exactly the same, in most cases,” Montgomery says.

The Sprinklers for Housing Debate

However, the latest versions of the IRC require that new site-built homes include a fire sprinkler system, a provision strenuously opposed by so many of the nation’s home builders, that many state and local regulatory agencies have elected not to adopt the sprinkler mandate.

The National Association of Home Builders (NAHB) reported in 2006 that “consumers do not want to pay for sprinklers when they are offered as an option, and they overwhelmingly oppose mandates requiring them.”

A survey commissioned by the group concluded that basements figured higher on homebuyers’ wish lists than sprinkler systems.

“When presented with a theoretical list of free options that a builder might offer to a potential home buyer as an incentive to sign a contract, two-thirds of survey respondents chose options other than fire sprinklers,” according to the NAHB survey.

More than half of respondents said they believed smoke detectors do an adequate job of protecting a family in a house fire.

Now the issue is heating up in manufactured housing circles, as HUD contemplates adding the sprinkler mandate to its own federal code, already among the most stringent and protective in the nation.

The California wildfires have sparked much of the recent debate over sprinkler systems, though many opponents, including states and local regulators, point out that this is not a practical solution.

“Interior sprinkler systems are for personal protection, when the house catches on fire from the inside,” such as when a resident falls asleep with a lit cigarette, says Montgomery. In the case of a wildfire, “an interior fire sprinkler would likely do little to nothing, as the power system to run the sprinkler system will likely be down and the house burns down from the outside in.”

Radiant barriers, non-vented attics, exterior foams and other new wildfire protection technologies can be much more effective — and cost-effective — options when dealing with outside fires.

“The best bet is to evacuate the home and get a new one if you have to,” Montgomery says.  “Various reverse 911 cell calls and alarms are most helpful here.”

Residential sprinkler systems are most often found in big cities and/or big homes, where there is proximity to municipal water supplies, fire departments and vast interior spaces that might see more benefit from a sprinkler system.

Manufactured homes tend to be in rural areas, where installing a sprinkler system is not a good option for any kind of home — be it stick-built, or factory-built, say experts in the field.

“You just don’t have the water to deal with it — the supply, the volume, the pressure,” he says. “The IRC code is dictated by city building officials. To require that in a rural area, you can spend as much as one third the price of a manufactured home.”

A sprinkler system costing $3000 or more might keep some people from qualifying for a home loan on a purchase of less than $100,000, opponents of the requirement say.

A 2014 NAHB study concluded that even a $1,000 increase in the cost of a new home prices as many as 200,000 potential home buyers out of the market, nationally.

And then, there is maintenance and repairs to consider in weighing the cost of such a system against the benefits.

“If a home loses power during an ice storm, the system may freeze and break, says Montgomery.

Affordability is an important component for the manufactured housing industry and opponents worry that a mandate that would unnecessarily drive up the costs may put home ownership out of reach of thousands of Americans.

Sprinklers are an option that homeowners can choose to have installed, says Deanna Fields, Executive Director of the

“Some of our factories incorporate sprinkler systems in certain areas of the house, such as the kitchen or furnace, if the consumer wants to pay for it,” she says.

But the best way to reduce the risk of fire in any home is substantially in the hands of residents. And the single most important factor is properly maintaining smoke alarms.

During the 1990s, when the Wisconsin Housing Alliance actively tracked fires, they discovered that most were caused by the carelessness of residents.

“One woman has burned down two — count them: two — by smoking while breathing from an oxygen tank,” says Ross Kinzler, executive director of the association.

Other fires were caused by:

It is rare that a house burns from electrical fires, says Kinzler, but then, too, most of them are caused by careless use of extension cords that overloads circuits.

And, of course, the biggest problem of all: failure to replace batteries in factory-installed smoke alarms, or even disabling them to keep them from beeping.

“I’ve been guilty of that, as well,” said Oklahoma’s Fields. “I live in a beautiful manufactured home in the country on well water — but even my site-built home I owned in the city, I neglected to replace the batteries like I should.

“Now that I’ve guilted myself on the batteries, I’m going home tonight to replace that battery in the hall and put the front plate back on it.  I believe I have a 9-volt lying around.” ##