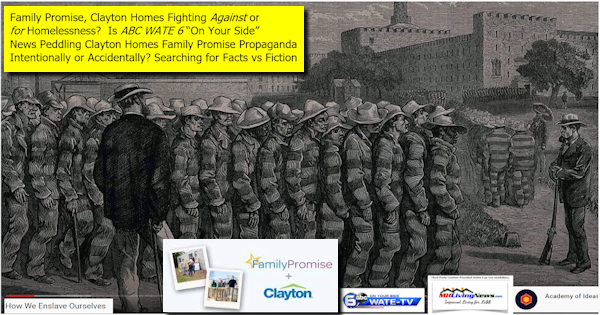 Facts matter. The true meaning of words matters too. The relationship between cause-and-effect matters. As MHLivingNews and our MHProNews sister site has each previously reported, Peter Buffett, Warren Buffett’s own son, has exposed significant problems with the so-called “philanthro-feudalism” industry. Prior to Peter’s revelations, the award winning documentary Poverty Inc, outlined numbers of problems tied to so-called charity or poverty programs that made problems worse overall for millions, even though some may have seemingly individually benefited. More recently, the Defender has revealed how Warren Buffett ally Bill Gates has deployed what is called charity in a fashion that both earns Gates and his allies good will with those who do not study the details, but harms those it claims to help. For instance, hunger increased in 18 countries that Gates established programs, says the Defender, citing a 2020 “False Promises” study. There are numerous historic examples of those who ‘give’ to charity, but who have a dark or even criminal reputation. It is with those predicates that someone should ponder the following about ABC News affiliate WATE 6 News out of Knoxville, TN that touts Clayton Homes and the Family Promise nonprofit. Because while some may appear to benefit, numerous questions must be asked to see if this is philanthro-feudalism or clever marketing in disguise, that aims to disguise a brand that may not merit dressing up.

Among the questions that ought to be asked is this.  If the stealthy predatory behaviors that research economists such as James “Jim” Schmitz Jr  and John Cochrane are correct, then there is a case to be made that Buffett-led Berkshire Hathaway owned Clayton Homes is actually harming far more than they are seemingly helping. Schmitz and Cochrane call the phenomenon, “sabotaging monopolies.” They have specifically pointed to manufactured housing and point to research that depicts those producing the sabotage as benefiting while causing homelessness.

Nor are they alone. Data provided by Freddie Mac has been cited by Mark Weiss, J.D., President and CEO of the Manufactured Housing Association for Regulatory Reform (MHARR). Weiss says that policies have kept the Government Sponsored Enterprises (GSEs out of the vast majority of manufactured home lending is harming untold numbers of Americans. 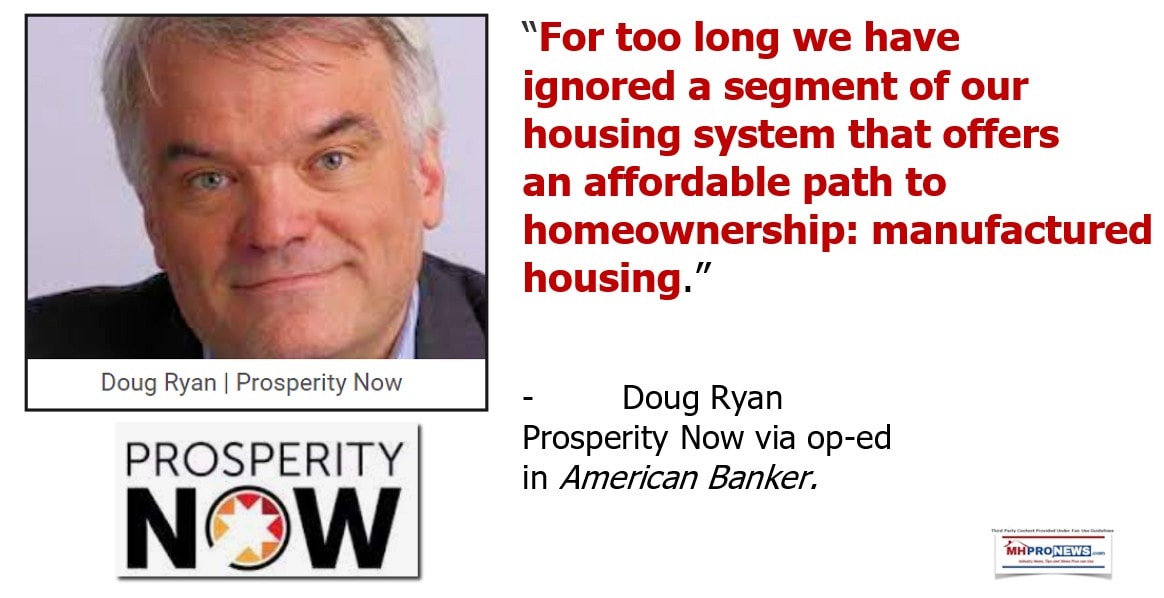 The concerns raised in this report were brought to the attention of the leadership of ABC affiliate WATE 6 “On Your Side” News. Clayton Homes general counsel, and MHI chairman, Tom Hodges were also copied, as were others involved with the Manufactured Housing Institute (MHI). A day later, as of press time, they have not yet replied.

Prior to ABC 6, MHProNews also contacted Family Promise, as is reflected in what is shown below.

As regular readers know, Clayton Homes and 21st are both owned by Warren Buffett led by publicly-traded Berkshire Hathaway (BRK).  Some of those background facts should be understood in order to grasp the reality captured in this scenario described herein and below.

With that introduction here is a copy of the message sent to ABC WATE 6’s top department heads.

Your report linked below was brought to my attention.

Family Promise receives $450,000 and 3 homes to be used to prevent homelessness | WATE 6 On Your Side

By way of introduction, MHProNews is the largest and runaway most read trade media serving the manufactured home industry. In conjunction with our public-facing sister site, MHLivingNews, we have a predominantly U.S. audience, but also about 5-7 (+/-) percent of Canadian and international readers.

Yesterday afternoon, we contacted Katie Coughlin with Family Promise by email to ask her a simple question about this press release that you have opted to cover.

We have received no response from the Family Promise spokesperson or others with their organization.

I’m hereby requesting that you respond to a similar question that we put to Ms. Coughlin.

If you are unaware of those allegations, please see the linked reports in our most recent emailed news to our readers further below.

We plan to do a report on this topic by noon or early afternoon today. We’d value your response by email for our mutual accuracy. Please let us know if your comments are ON or OFF the record, and it will be so treated. If ON the record, kindly advise who to attribute the comments to as well?

Note: If you did not see it or don’t recall, this is what your nearby television news competitor aired about Clayton and their lending. https://www.youtube.com/watch?v=XORHf-1ExrA&t=35s

Note that we have asked Clayton and Berkshire to respond to such allegations on several occasions. About 1/3 of the headlines topics further below deal with Berkshire or Clayton in the headline, which is not a surprise, because the data reflects they are about 50 percent of the industry’s HUD Code manufactured home production.

As one further bit of insight, for several months running, the runaway most read article on our public-facing MHLivingNews website has been this one linked below. That is not because it sits at the top of the home page. Take a look, because you’d likely have to use the search tool to see it. What that arguably suggests, as your digital people can tell you, is that people are doing online searches related to this topic. 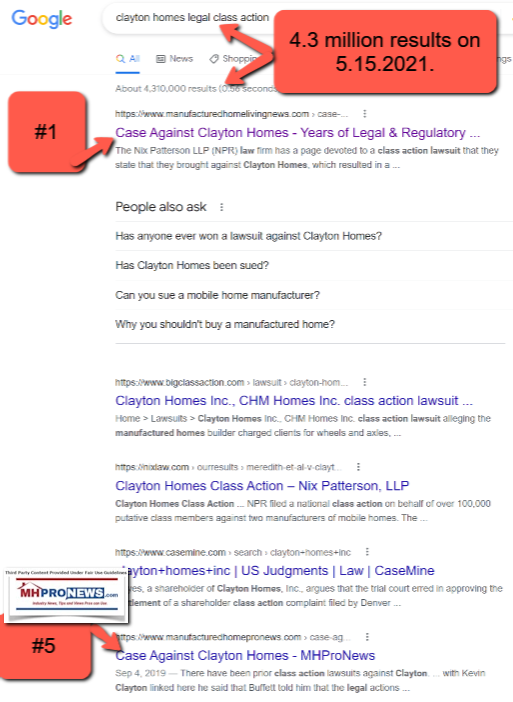 Kindly email your response. For the broader picture, as a news tip, see the WND letter linked among the forwards below too.

Note, I’ve BCC’d a few MHI team/members, attorneys, and industry pros to document our request, which I hope you reply to in a timely fashion. Either way, we will report. Thank you.

A series of linked reports were provided that included the one below.

Some of the other links that were shared with ABC WATE 6 are as shown further below.

The YouTube video link emailed to WATE 6 is the one shown above.

If the station, Clayton Homes, Family Promise, or the Manufactured Housing Institute (MHI) responds, MHLivingNews can do a follow up or update on this report.

But to wrap this up, let’s make a simple point that Clayton Homes and Family Promises own photo that ABC 6 used should have been self-evident. A sign was set up in the front yard with Clayton’s and Family Promises logo. Photos and video were taken. Yes, Clayton gave away money, but how was the money earned?

Furthermore, weren’t they getting free marketing for it, when WATE 6 or others treats it as a news story, instead of as shrewd marketing or propaganda? Isn’t Family Promise also getting marketing value to get more donations from this ploy? If Family Promise understands what sort of people the Claytons and Berkshire are, would they still take their money? 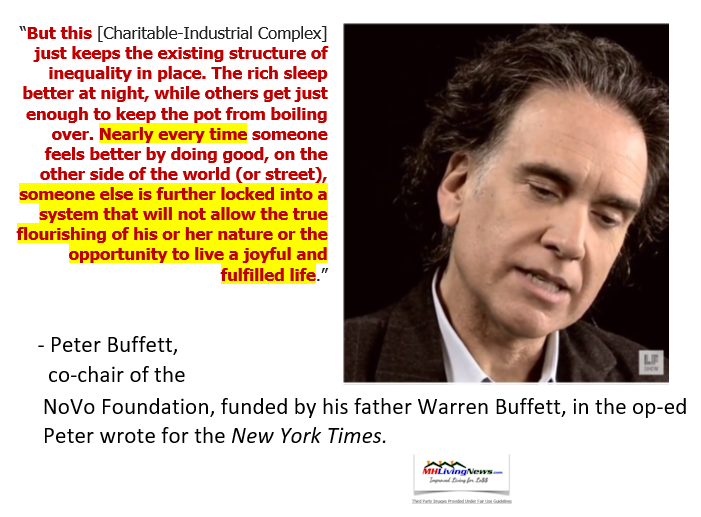 There are similarities and difference between modern feudalism and the kind that existed centuries ago. Those with the power do not want those with limited power to rebel. So, then and now, the ‘lord’ would periodically give something away to make the people feel better about having a lord. In our own time, people are being ‘bribed’ with what could or ought to be their own money if the system were not so rigged. While the language used in the quote below is harsh, it may wake some up to the sobering reality of just how misled millions are, and the media can be complicit in that process.

There are more people than there are corporate manipulators.

The modern would-be feudal masters want to be well thought of, and spreading around a little ‘philanthropy’ seems to do that for their image. But Warren Buffett’s own son Peter make it clear that this can be little more than posturing to brace the donor’s arguably otherwise troubled image. ABC WATE 6 should take a careful look at the SPJ Code of Ethical Conduct. Then, they should do a correction and follow up on this story. See the related reports to learn more.