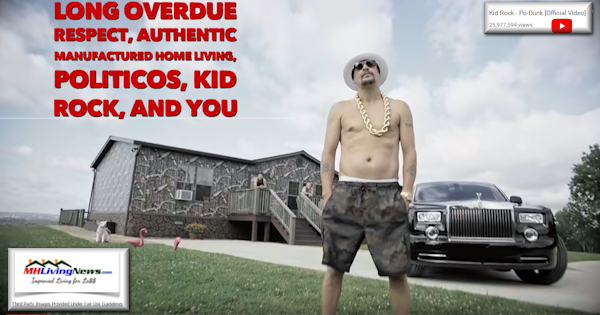 As previous and upcoming reports on MHLivingNews reflect, there is a growing interest in America by politicos spanning the left-right divide about supporting the use of more manufactured homes as part of the solution to the affordable housing crisis. It’s about time.

For example. Elvis Presley owned several true mobile homes. Elvis and Priscilla spent part of their honeymoon in one of them. It had a gold-plated sink and bath tub. The rich can find a way to set their own standards.

But today, we’ll take a peek at manufactured home owner Kid Rock, who defies easy labels, except perhaps that of an American rebel. Let’s get a quick snapshot: “Kid Rock is an American multi-instrumentalist, music producer and actor who has a net worth of $80 million dollars. Kid Rock was born Robert James Ritchie on January 17, 1971, in Romeo, Michigan. He has had arguably one of the unlikeliest success stories in modern rock music,” per Celebrity Net Worth.

In this CBS Good Morning interview posted below, which has had over 2 million views on the date this is being posted, Kid Rock reminds us that he was briefly married Pam Anderson. As our longtime MHLivingNews readers know, Anderson also owned a manufactured home in a land lease community that overlooked Malibu Beach, where other rich and famous manufactured home owners live. The CBS interview was done prior to KR’s purchase of a manufactured home.

Among his many possessions, the flashy performance artist has a private jet, a Rolls Royce, and on his Tennessee mountain top near Nashville, he has a camo manufactured home. The word heard is that he sold a mansion, and then bought his beloved getaway near Nashville from his equally loved ‘home town’ of Detroit.

MHLivingNews noted a couple of years ago that he toyed with the idea of running for the U.S. Senate, but it was later revealed as a more of a publicity stunt and voter registration effort.

In a “Big Interview” with Dan Rather, the former CBS anchor said Kid Rock was known to hang out in so-called ‘bad neighborhoods’ where he developed some of his varied styles of musical entertainment. African Americans then reportedly said ‘look at that white kid rock.’ So Kid Rock became Richie’s stage name. He has a son he’s proud of from a mother who is a black woman. KR brushes off the periodic slurs against him claiming he is a racist by pointing to his obvious history. He seems to handle slams casually.

In the Big Interview clip below, he sings “Tennessee Mountain Top” for Dan Rather. It is performed inside his manufactured home.  So, as you watch this video, you’ll see the island kitchen in the background, and they are sitting in a living area.

In his music video Podunk, Kid Rock is celebrating the millions who live in less costly homes. He sets the tone of people who cling to God, the Bible, faith, family, flag, fun, and guns with various cutaways. The music video depicts lower income Americans favorably, elevating what’s depicted as a more carefree lifestyle. Some of them are shown living in older conventional houses; some are reflected as living in older manufactured homes. Parents, note that the next video is akin to a PG13 rating, with periodically suggestive images.

Kid Rock in this video gives these ‘forgotten Americans’ of all colors respect. It’s been viewed over 25 million times, many millions more than when we reported on his feigned U.S. Senate run.

His then-new camouflaged manufactured home is in the background, as he stands out front next to his Rolls Royce.  Later in the video, viewers get an inside look at his private jet.

On MHLivingNews, we absolutely prefer that people of whatever means call things and others by their proper names. It is the right thing to do. Millions, including this famous performer, call his home a ‘double wide,’ a ‘mobile home,’ or a ‘trailer.’ It is rightly called a manufactured home. But Kid Rock wasn’t acting as a pitchman for manufactured housing. Rather, he has spoken casually and positively about this get away home he’s happy to call his own.

One must meet people where they are. The point of this article isn’t to turn Kid Rock into a role model, a posture he might eschew himself, as he admits in the first video above that he is someone who has made mistakes. Rather, it is to spotlight that people of means – who could pick whatever kind of housing that they want to – in specific cases select a manufactured home.

In our Inside MH Road Show videos, we’ve interviewed several millionaires who call a manufactured home, their home. We didn’t announce on camera that point, because they didn’t.  But when you pay close attention, they say sometimes subtle or casual things that make it clear that they had a healthy net worth, and could have – often did have – nice conventional houses before they bought a manufactured home.

A home by any name is like that poetic rose. The ‘scents’ of home can be sweet and beautiful to behold.

As more public officials and elected leaders have or are studying the issues about the most proven form of affordable housing, they are grasping the value of manufactured homes. So, it should be no surprise that some famous people of means have or do enjoy the manufactured home lifestyle.

Here on MHLivingNews, we uniquely look at the controversies that often make headlines and call the balls and strikes. But we also showcase the reasons to celebrate manufactured homes, and the estimated 22 million who live in the most affordable type of affordable housing. There is no other place online that gives readers and reseachers a broader, more candid snapshot of manufactured home living than this platform.

As industry professionals and experts, we bring decades of qualified insights into each report. Because we’ve lived in nice and appealing conventional housing, as well as appealing manufactured homes too, we can provide a unique vantagepoint that is useful for those who are pondering their own adventure into manufactured home living. “We Provide, You Decide.” © ## (Lifestyle news, reports, fact-checks, analysis, and commentary.)

Submitted by Soheyla Kovach for MHLivingNews.com.

Soheyla is a managing member of LifeStyle Factory Homes, LLC, the parent company to MHProNews, and MHLivingNews.com.

Connect with us on LinkedIn here and here.