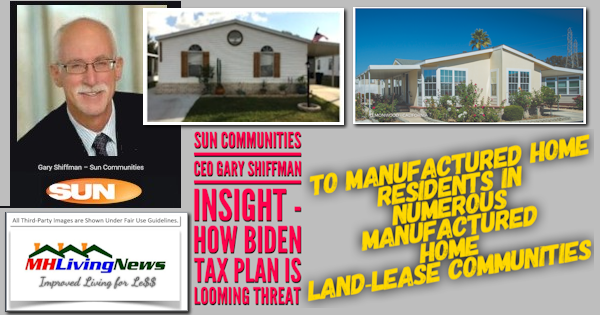 Facts are not partisan. Facts simply are what they are. Facts may have a partisan policy implication, but that is not the same thing as a fact being partisan. When the Tax Foundation did an analysis on the proposed Biden tax plan that would supposedly pay for his proposed American Families Plan (AFP), the nonprofit said that “most economists agree that both the estate tax and capital gains taxes already amount to a second or third layer of tax on the same income.” They said that the effective rate for an inheritance tax could amount to some 61.1 percent of the total value.

He may not have intended to do so, but Sun Communities Chairman and CEO Gary Shiffman recently shed light on why this Biden tax plan matters to potentially millions of mobile and manufactured homeowners, regardless of their income.

The following quote is from Shiffman’s recent Sun Q1 2021 earning’s call. In response to a question, Shiffman said that: “As we’ve shared recently that current pipeline [of acquisitions of manufactured home communities and parks] across manufactured housing, RV and marinas has never been as full as it is right now.”

Shiffman added that, “I think that we’re seeing a little bit more outreach than we even expected with some of the discussion about change in capital gains and things like that moving forward by the current [Biden] administration, with obviously uncertainty as to where that’s going.” (Emphasis added by MHLivingNews, the transcript is available at this link here.)

Put differently, Shiffman revealed how fear of higher taxes and more regulations are being used as a barrier of persistence that are driving more independents to sell their properties. That trend benefits consolidators like Sun Communities, or other brands that may have a predatory reputation.

As MHLivingNews recently reported, Manufactured Housing Institute (MHI) member – giant RHP Properties – recently closed on over 2 dozen more communities.  As Shiffman indicated, not only his company, but other consolidators are seeking an increase in sellers, because they are trying to beat the implementation of such a higher tax rate.

That could mean that manufactured homeowners living in a ‘mom and pop’ owned family business community could see an increase in such properties once they are sold to consolidators. That is because those sales routinely result in higher site fees or ‘lot rents,’ that often kick in not long after a sale. See the report linked above for examples.

Terry Jeffrey is the Editor in Chief of CNS News. On 5.6.2021, he was interviewed on the Chris Salcedo Show on Newsxmax TV  (Jeffrey spoke on this topic from about the 24:45 time marker to about 25:30). When asked about the pending tax, Jeffrey said the following.

Jeffrey continued, “So, if you have a family owned business, the patriarch or the matriarch of the business dies, the government comes along and says, you know that business you own is worth $5 million dollars [example]. And Biden says you will give 61 percent of it to us [i.e: the government].

“So how does a family get 61 percent for paying the federal government? The only way they can do it usually is sell the business to some big public corporation,” said Jeffrey “and then hand over the money to the government guys like Joe Biden. The inheritance tax is a tax on families.”

While the actual percentages may vary, the point is still largely the same. And as Shiffman has pointed out, just the threat of the increased taxes and/or more regulations are motivating more community owners to sell.

It is simply a fallacy to claim that lower income people do not pay taxes that are levied against big corporations. Who says? The nonpartisan Congressional Budget Office (CBO). They have said that some 70 percent of corporate taxes are passed onto customers of the business.  The case could be made that the CBO figure is too low.

This tax is not yet a reality. If the tax were stopped, then perhaps that increased “pipeline” of sellers that Shiffman was touting might slow down.

There is another aspect to this that CNBC revealed. While many are thinking of this as a tax on businesses, the tax could be applied to more expensive housing too.

Just as higher prices paid by businesses are passed onto the working class, the middle class, and retirees, as Warren Buffett recently admitted with respect to Clayton Homes, so too are taxes.

Attorney turned award winning journalist Glenn Greenwald has sounded the alarm several times in the last 6 months about what he has called the “blinding propaganda” that is being promoted by “establishment” Democrats and Republicans on behalf of the billionaires, tech titans, corporate and media interests.

Greenwald called this a “ruling coalition that is consolidating power…authoritarianism.” “And they have on their side – beyond the bulk of the corporate media, and the intelligence community, and Wall Street – and unprecedently powerful consortium of tech monopolies willing and able to exert greater control over a population that has rarely, if ever, been so divided, drained, deprived and anemic.” 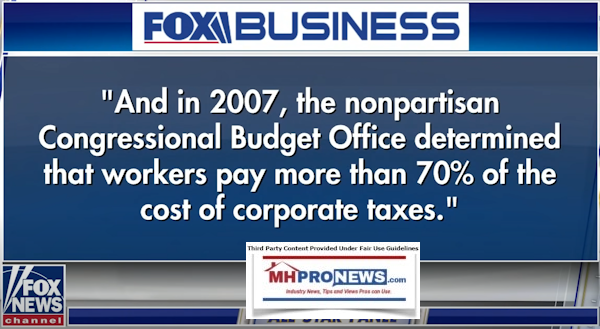 Justin Haskins with the Heartland Institute recent said that: “Corporations are moving left for a reason, and it’s not because they have suddenly had a come-to-Bernie conversion.” Haskins added that “The Great Reset, like so many movements in history, is all about money and power-and these days, there’s plenty of both available for the ruling-class elites to get their fill.”

As MHLivingNews and our MHProNews sister site have been periodically reporting, this “Great Reset” is not a myth, it is a real plan found on several pages of the World Economic Forum (WEF) website. Democrat, progressive advocate and attorney Robert F. Kennedy Jr. (RFK Jr.) has warned about this threat to liberty and property rights too.

When the evidence is examined, a clear picture emerges that regulators are often ineffective at accomplishing their stated task.  This is not new. Canadian-American economist, diplomate and public official John Kenneth Galbraith – in commenting on the stock market crash of 1929 – wrote “Regulatory bodies, like the people who comprise them…become, with some exceptions, either an arm of the industry they are regulating or senile.”

Carol Roth has similarly warned about the fact that big business secretly loves regulation, because larger businesses can navigate rules that may cause smaller businesses to sell out and walk away.

See the linked and related reports to learn more. Because the time to act is before lawmakers vote for policies that could hurt large numbers of Americans, including, but not limited to, those living in manufactured home communities.

First time visitor? As in any profession, there is good news and troubling news.

Before diving into the headline topic about angry Clayton Homes customers, it is important to …