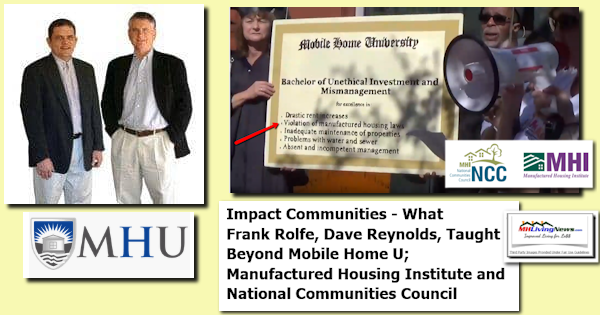 If you don’t already know the term, now is a good time to look up the meaning of ‘paltering.’

Then with the definition of paltering in mind, proceed with this report as we unpack what Frank Rolfe, Dave Reynolds, and their colleagues have been teaching observers – beyond the lessons of so-called ‘Mobile Home University’ [SIC].

“Frank and Dave” have been making periodic headlines for years, initially on reported claims of ‘double wide’ returns for investors. Initially, several reported that the pair and their investors were improving the land-lease communities that they were buying up from ‘mom and pop’ operations.

But in more recent years, the stories involving Frank, Dave, their enterprise previously named RV Horizons and more recently dubbed “Impact Communities” have grown darker. Along with others that often happen to be Manufactured Housing Institute (MHI) members, actions in communities owned by “Frank and Dave” periodically churn out problematic news headlines about stiff hikes in the site fees, threats of questionable grounds for eviction, and other vexing matter that often involve senior residents.

Separating White Hats from the Black Hats in MHVille

Before going deeper, let’s stress that there are still statistically more independently owned, ‘mom and pop’ type communities and business operations than there are those owned by larger MHI members. Those independently owned communities are typically not those that gin up the kind of troubling allegations made against them as Frank, Dave, or prior MHI Chairman Nathan Smith have encountered.

Figure out who in the market areas you are shopping in have a good reputation and fair agreements, and those who don’t. You’ll likely find those with stellar records with the Better Business Bureau, as well as some – like Smith – who earned a ‘F’ rating with the BBB.

Back to Frank, Dave and the MHI National Community Council “Lesson”

First, after months of published reports on MHLivingNews and our MHProNews sister site, and years of concerns periodically raised by the Manufactured Housing Association for Regulatory Reform (MHARR), in the wake of numbers of public outcries, last summer, the Manufactured Housing Institute (MHI) and their National Communities Council (NCC) finally took the following step. They issued a ‘Code of Ethical Conduct’ for their members, which will be shown in full further below.

Before looking at their new ‘code,’ let’s note that we promptly and publicly expressed editorial skepticism as to the sincerity of MHI and their NCC division as to if they would in fact enforce such a code. Why our doubts? Because before the ‘Code of Ethical Conduct,’ numbers of those sad news reports were directly connected to MHI members and/or those attending MHI meetings.  Years of bad news hasn’t kept them from embracing so-called ‘black hat’ firms before.  Why should it stop them now?

The video posted near the end of the report below tells that sad tale.

Several of those negative news stories have focused on “Frank and Dave.” Frank Rolfe is specifically mentioned by John Oliver, as is their profit machine, ‘Mobile Home U.’ One problem with the HBO video is that it lumps the industry in with Rolfe, but that is an exaggeration. That said, there is no denying the problems raised John Oliver and others, is there?

So given MHI/NCC’s issuing their new code of ethical conduct, what has happened?

The evidence is clear. Here are some screen captures of mainstream news reports involving Frank Rolfe.

Put bluntly, the problematic behavior shows no sign of abating. Indeed, CBS aired an episode of their popular NCIS show that seemed to be based upon Rolfe and ‘Mobile Home U,’ only the names were changed as such programming often does.

With those in mind, here is MHI’s Code of Ethical Conduct. You read it, and keep in mind that there is no word yet of ANY steps taken against ANY member under this ‘code.’ Note that the end of their code states it was “Adopted July 2019.” Compare that to the dates of the mainstream news reports shown in the Google searches above our comments in the red text box.

As a Member of the Manufactured Housing Institute, (“MHI”), and the National Communities Council, (“NCC”), I subscribe to the principles set forth in the following Code of Ethics established by the NCC:

Members agree to promote positive customer and resident relations as an essential responsibility.

Members agree to conduct themselves in a professional, courteous, and considerate manner in communications and interaction with other members, residents, vendors, and the general public.

Members agree to be bound by this NCC Code of Ethics, as well as the MHI Bylaws, as a condition of membership.

If it is determined that a Member is not acting in accordance to this NCC Code of Ethics, a Member may be expelled from NCC and MHI membership pursuant to NCC Operating Procedures Section 5 and Article II, Section 5 of the MHI Bylaws. ## 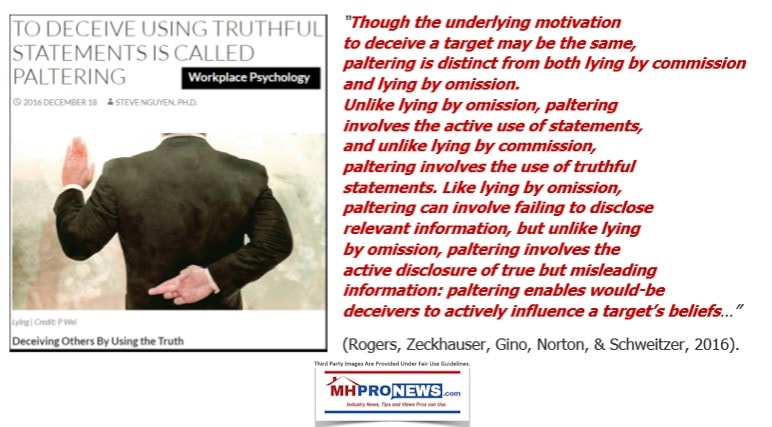 With that in mind, now ponder the meaning of the word paltering again, given the kind of headlines that “Frank and Dave” – along with others who are connected to MHI/NCC – generate. The video clip below is from the same episode of NCIS that depicts “Midas Mike,” but shows one of their fictional students.  The episode can be watched on NCIS S17 Episode 3 on CBS All Access.

MHI, their outside attorney, and top elected and staff leaders were all contacted about this specific set of examples involving “Frank and Dave” and their firms. The emailed request for comments and status message was confirmed, but they have not formally replied.

Similarly, Frank and Dave were contacted. They have also declined commenting.

A number of MHI/NCC members have said that the code of conduct had only recently been brought to their attention, and they are aware of no action taken against any members.

Once more, MHLivingNews doesn’t hereby imply that every MHI or NCC member is problematic. Nor are all staffers at so called ‘black hat’ brands black hats themselves. Some of our better sources are white hats working in black hat operations.

That disclaimer made, a thoughtful reader here or on MHProNews can do a few searches and quickly realize that many of the negative news items involving manufactured home professional operations involve MHI and their more prominent members.

MHLivingNews will continue to monitor such developments and periodically report. At this time, the evidence appears to indicate that MHI’s ‘code of conduct’ is more window dressing, perhaps designed to mollify lawmakers who they are working with on a problematic bill. That pending legislation may be the subject of an upcoming report. So, stay tuned.

“We Provide, You Decide.” © (Manufactured homes, lifestyle news, reports, fact-checks, analysis, and commentary. Third-party images or content are provided under fair use guidelines for media.)

Share
Previous Examining Realtor Kristina Smallhorn’s “5 Biggest Lies About Manufactured (Mobile) Homes” – Video and Analysis
Next The First Mobile Housing? Gathering Together to Give Thanks