It is important to get a balanced view of anything that involves a major decision. Here on MHLivingNews, we’ve done a mix of stories for years, spotlighting the good, the bad, and the misunderstood about all kinds of housing, including those homes built in a factory.

How do you tell the difference between a proverbial ‘white hat’ company and a ‘black hat’ firm?

This report will cover that topic and the headline of discerning value and business ethics by contrasting a specific, well-rated company with others that have often generated negative news headlines.

We recently spotlighted examples of brands and companies associated with problematic business practices. Some of those reports are linked here, here, here, here, and here. In fairness, there can be problems with conventional housing builders too on housing that cost much more than a manufactured home; see a mainstream news video in our report linked here. We’ve also covered the praise heaped on manufactured homes by HUD Secretary Ben Carson, whose federal agency oversees the bulk of federal regulations on the most cost-effective permeant homes in the U.S.  See mainstream videos with Secretary Carson linked here. More light-hearted are examples of the rich and/or famous who own a manufactured home, see an example, linked here.

With that backdrop, lets take a peek at Lifeway Homes in Tulsa, OK.

There are a variety of ways that a consumer can learn about a company from third party sources.  One is to go to a website such as the Better Business Bureau or BBB.  For decades, the BBB has provided a useful way to get a sense of a business’ ethical and consumer relations practices. 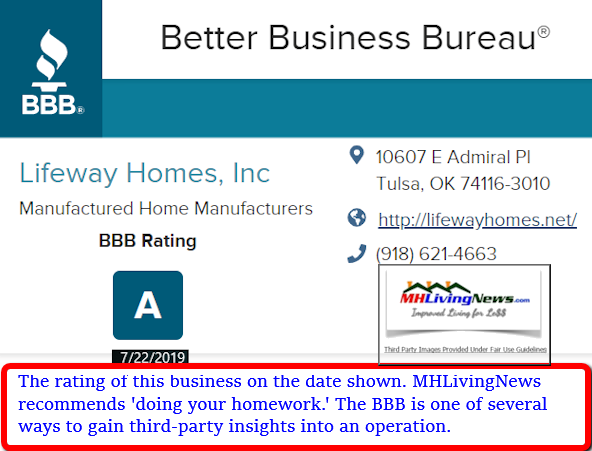 These days, anyone can get out a smart phone and do a video.  Companies with deep pockets can hire professionals that can regrettably make a black hat company look pretty cool on camera.

In our Inside MH video series, we do authentic interviews, not staged ones with scripts.  We don’t compensate a manufactured home homeowner, public officials, or experts for doing a video interview. So why do they do it?  Most tell us in their own words that they want more people to know the truth about manufactured homes, instead of the stereotypes. Is that an indirect benefit for them?  Perhaps, but we don’t write them a check.

The people in the videos below are speaking from their minds and hearts.

While a sponsoring entity pays for production, neither that sponsor nor the location where interviews are done have control over the content of the videos we produce. Those facts alone would scare a ‘black hat’ operation away from doing authentic interviews with actual customers.

By contrast, ‘white hat’ firms enjoy the opportunity to have their customers interviewed. It is already making sense, doesn’t it?

In the case of the Lifeway Homes customer below of a Native American and his wife being interviewed, one quickly gets the value of doing authentic interviews vs. a commercial. We don’t know what that homeowner is going to say.  While some of our questions are similar between interviews, being ‘in the moment’ leads to questions asked based on a comment on or off camera by the person(s) being interviewed.

Rephrased, when someone says – as this homeowner below did – how a pleasantly surprised visitor to their residence asked, “Can I bring my cousin?” to see their home, those kinds of authentic moments are priceless.

We have also interviewed public officials who know housing well. Both the interview above and below were connected with LifeWay Homes, which once more did not pay us for these interviews.  The county commissioner who is interviewed below wasn’t compensated either.  He is sharing first-hand insights and experiences. Those can be as compelling and useful as a BBB rating, right?

When one sees the video above, and then looks at the debate in the mainstream news video report further below – which is entirely unconnected to the companies spotlighted in this report – it gives a different feel to the misplaced concerns millions often have about manufactured homes.

Facts should trump mere opinions. That’s part of the reason we created this platform in the first place. This provides a third-party resource that cites reams of authentic third party research – see several examples linked here – as well as showcases real interviews with real people.

This next video reflects a debate that is occurring not just in the town where this report by local media was produced.  That debate is occurring nationally. It is emblematic of the desires of numbers of developers, retailers, investors, and others to use manufactured homes as ‘infill’ on vacant lots in areas where it is unlikely that conventional housing would be constructed.  Some embrace the idea, others resist. But those who resist routinely do so for easily disproven notions.

For an example of a disproven notion, the news video stated the views of some that manufactured homes may reduce the property values of neighboring homes.  But that has been debunked time and again, by third-party studies, like the one commissioned by the federal government at this link here.

What is necessary is not fear or prejudice, but facts and an application of federal law.

The Congress passed the Manufactured Housing Improvement Act of 2000 (MHIA) which was signed into law by then President Bill Clinton. The MHIA provided for new standards of manufactured home installations, for enhanced consumer protections not found in other forms of new construction, as well as “enhanced preemption” for manufactured homes. HUD Code manufactured homes have been third-party inspected during production for years, as the video and report linked here makes clear.

When there is an affordable housing crisis that impacts every one of the 50 states, why not turn to a solution that provides the opportunity to own at prices far smaller than conventional housing?  Even when an interest rate may be higher, because of the manufactured homes far lower total cost, the monthly payment on a loan could be significantly lower than renting.  Who says? The Government Accountability Office (GAO).  By the way, the GAO too have studied manufactured homes, and had plenty of good things to say. The graphic below is from their report. 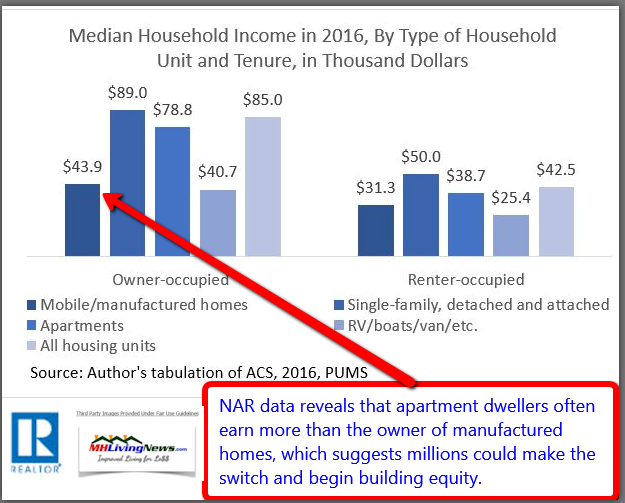 So, as Mike Harrison explained in this video, there is the opportunity to do hundreds of homes in short order.  During an affordable housing crisis, that could be good news.

This video above was produced in the aftermath of hurricanes that had impacted southeastern Texas and Florida. With that understood, Harrison gives several actual examples of projects he was involved in where dozens to hundreds of homes were installed in a period of weeks to months, not years.

We used the word ‘faithful’ in the title with respect to Lifeway Homes.  With thousands of companies and locations in manufactured housing, we frankly don’t follow their firm closely. But what we learned while we where there is that their faith inspires their desire to serve their customers well. You don’t see a Bible on a desk, or some biblical saying on the wall near a cross. What you do see are apparently sincere professionals who strive to live out what they believe by serving their customers well.

So that A rating from the BBB website this morning came as no surprise.

There are no perfect products, be it electronics, cars, RVs, boats, or housing. There are no perfect people walking the streets in our country today or any others. We are all a mix of good and problematic. Sometimes vexing problems occur with any product or service, or as my younger brother says, ‘stuff happens’ – only his S— is followed by three different letters than the 5-letter word ‘stuff.’

What occurs after a business is made aware by a customer of a problem is what sets a ‘white hat’ and a ‘black hat’ company apart. Let’s be honest, some things can be fixed on the spot, others require more effort and time. But the numbers of fixes that required going to dispute resolution process that is uniquely available for manufactured homes are a tiny fraction of all homes produced, according to federal data, see the report linked here. Out of the tens of thousands of manufactured homes produced, it is only counted in the dozens annually. That’s impressive. It is perhaps one of the strongest possible statements in favor of the success of federally regulated manufactured homes.

Other measures of customer satisfaction by third-parties are linked here and here.

What a deeper dive into manufactured home living, buying, and owning reveals is this. You can buy an affordable home at a fraction of the price, because it is built indoors on an assembly line like a computer or car.  That computer or car costs less than if you had to build just one in your driveway, and wait for a bunch of contractors to do each phase. That’s how manufactured homes save time and money, because of factory building.

Let’s wrap this report up with some advice based upon common sense.  Before millions buy a product or service, they go online and do their homework. That’s what should occur when buying a house too.  Odds are excellent that whatever quality, weather-related, or other concerns you may have about manufactured homes, you can find third-party verified data that will clear up misconceptions accurately right here on MHLivingNews.

With a new manufactured home, there are warranties not commonly found on existing housing that may cost far more money.  Because of federal law, manufactured homes have consumer protections not found in other forms of building. And as federal and National Association of Realtor (NAR) studies reflect, manufactured homes can appreciate in value under the same types of conditions as conventional housing does.

My family and I have lived in both conventional housing and manufactured homes for years ourselves.  We can tell you from experience that you cook, clean, eat, live, and love the same in a manufactured home as more expensive forms of housing.

So, the question for savvy shoppers is not only would a manufactured home make sense – it often does – but who should a shopper do business with?

We encourage all housing shoppers to do your homework. When you do, you may well find a retailer, developer, or community with a Mike Harrison and Lifeway Homes type of reputation serving the area you want to live. “We Provide, You Decide.” © (Lifestyle news, fact-checks, reports, and analysis. Any third-party images and content that may be shown are provided under fair use guidelines for media.)

L. A. ‘Tony’ Kovach is co-founder of MHLivingNews and MHProNews. He is a highly acclaimed industry expert and consultant, a managing member of LifeStyle Factory Homes, LLC, and is a 25 plus year award-winning manufactured home industry professional. Kovach earned the Lottinville award in history at the University of Oklahoma.