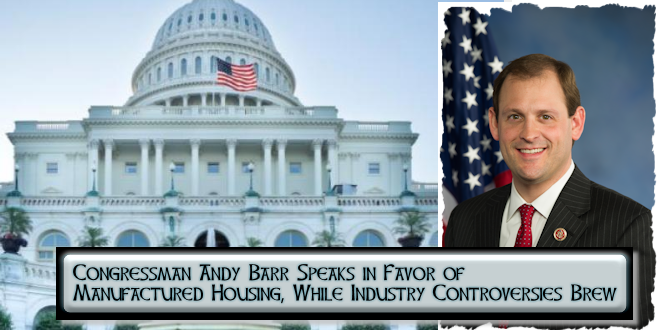 Congressman Andy Barr, from Kentucky’s 6th Congressional district, spoke in the House of Representatives on March 9, 2017 in favor of manufactured housing.

Representative Barr addressed challenges caused by the Consumer Financial Protection Bureau regulations.  This is an issue of importance to manufactured home owners and prospective buyers, and is a topic that has been covered several times by MHLivingNews, and our professionally-focused ‘sister’ trade-media site, MHProNews.  One of several 2016 reports, with a video, is linked here.

Barr, per the Manufactured Housing Institute (MHI), said the following in his comments before Congress.

“…This hospital worker from Kentucky can’t get financing because of the very entity created to protect consumers – the Consumer Financial Protection Bureau. That’s right – the federal government is protecting people right out of homeownership. Consumers are protected so much that they can’t purchase a manufactured home. Lenders have stopped making manufactured housing loans because of the CFPB regulations.”

Barr pointed to 2014 Home Mortgage Disclosure Act data (HMDA), arguing that manufactured home lending volume for loans under $75,000 decreased in the first year the regulations went into effect.  This was noted as evidence that many lenders previously willing to make manufactured home loans, were no longer willing to do so. Some examples previously cited on MHLivingNews are linked here.

Representative Barr urged his colleagues to “work together to make these changes to CFPB regulations as soon as possible so that the federal government stops prohibiting consumers from achieving the American dream of homeownership.”

Kudos to the Congressman, and KMHI

Barr is to be applauded for learning the issues that tens of millions of Americans need to be more aware of; this writer has met Barr several times, and he strikes me as a thoughtful, committed and informed member of Congress.

Also to be applauded are Betty Whitaker, of the Kentucky Manufactured Housing Institute (KMHI). Whittaker – who along with some of her association’s colleagues – made it a point to meet with Barr and his staff on several occasions to cultivate the professional relationship, so that the congressman could be well-briefed on the facts related to manufactured homes and financing.

Barr has said that he himself has friends and family ties that lived the evolution of the industry from the trailer houses and mobile homes of the past, to today’s manufactured homes (see video above).

The video of Barr’s address shown below has a synch issue, but reflects the text shown above and more.  Perhaps MHI will offer to fix this video for the congressman?

Finance is certainly an important issue for the manufactured home industry, and for millions of consumers.

But as MHI award-winning retailer, Doug Gorman has recently said in an Industry Voices column, there are many more issues that need to be addressed to level the playing field for manufactured home owners, prospective buyers, and thousands of businesses engaged in the factory-crafted home profession.

Gorman told MHProNews that, “I can’t improve on what Mark Weiss [Manufactured Housing Association for Regulatory Reform (MHARR) President and CEO] has indicated below.”

“While MHARR does not claim to speak for the entire industry, we have made it clear that after years of abuse by federal regulators acting contrary to the law and empowering entrenched revenue-driven contractors to target the industry, the new era of regulatory deconstruction being ushered-in by the Trump Administration offers a profound opportunity that must not be missed or squandered.”

In the 5 pionts summarized below from Gorman’s column – including some background from MHLivingNews below some of the numbered point – MHARR’s president alluded to rival MHI, which does claim to represent all segments of the entire industry.

The following 5 bullets were items that Weiss said – as cited by Gorman – are needed to boost the industry well beyond the current levels of its multiple-years of post-recession growth.

“1) Elevate and include manufactured housing in all HUD (and other federal) housing and housing finance programs on the same terms as other types of housing,” said Weiss.

This first point goes well beyond the issue and efforts that Barr addressed in his video above.

Gorman is not alone in his concerns about Danner, who is a personal friend of Gorman.

Many in the MH Industry are troubled that MHI has not taken a public position on the controversial Danner, which may signal that they want her to stay on.  That would seem contrary to the interests of home owners, buyers, investors and the industry itself.  MHLivingNews has reached out to MHI for comment, which so far, has not been forthcoming.

When MHARR and professionals like Gorman have sounded off, why hasn’t MHI?  Why is their position on such an important topic a closely guarded secret?

“3) Immediately prepare and issue a new Request for Proposals (RFP) for the HUD program monitoring contract…” wrote Weiss, as cited by Gorman.

“4) Seek the immediate withdrawal of the U.S. Department of Energy (DOE) proposed manufactured housing energy rule pursuant to executive action by either the incoming DOE Secretary, the President, or other appropriate authority…”

This provision references a pending rule that MHI had initially supported, but MHARR opposed as it would drive up costs unnecessarily. Third party studies – see linked graphic above – showed that the rule would have had a very long energy payback period, and was largely available to those buyers who wanted more than the legally mandated energy savings levels.

“5) Demand and ensure securitization and secondary market support for manufactured home chattel loans in a significant and timely manner by Fannie Mae and Freddie Mac, so that consumers are not needlessly either excluded from the housing market or unnecessarily forced into higher-cost loans within a less-than-fully-competitive consumer financing market.”

Regarding the Duty to Serve (DTS), the video below by FHFA’s Jim Gray – shared today without detailed comment or analysis – provides the federal snapshot of what the program is intended to do for manufactured home owners and consumers.

That Gorman, a long time MHI member would come out in favor of positions supported by MHARR has caused some stir in manufactured housing professional circles. We plan to track the developments and impacts for consumers, public officials, investors, housing professionals and advocates in the days ahead.

Once more, we applaud those leaders like Congressman Barr, others in Washington, and thousands across the nation who are fighting for equal rights for the 22 million living in manufactured homes, prospective buyers and fair minded-industry professionals. ##

Share
Previous After an Abusive Relationship, Fresh Starts, and Finding a Home
Next American Dreamers and HUD Secretary Dr. Ben Carson; How Millions Could Win by Enforcing the Law

Preface. As a disclosure, this writer has spent about half of my adult life living …