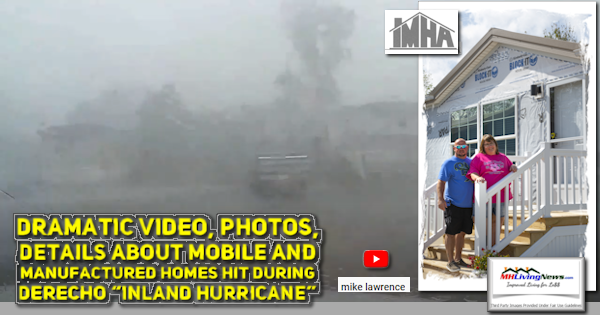 “Positioned in the heart of the Midwest, Iowa’s weather ranges from extreme cold and snow to temperatures in the triple digits.” So, something Iowans are familiar with is wild weather, said a recent industry press release to MHLivingNews. For what its worth, the weather in Oklahoma – and other Great Plains states – can fit this description. If you are not from Iowa, the following applies to wide swaths of the U.S.

“And let’s not forget tornadoes. Iowans see virtually everything mother nature can throw, but on August 10th, 2020, the state was in for a record-setting weather incident. What has been compared to an “Inland Hurricane,” a ferocious storm called a derecho swept across the state with winds equal to a Category 2 hurricane, taking down 100 year old oak trees, stripping homes of roofs, destroying business complexes and more. But through it all, Iowa’s manufactured homes, generally perceived an easy target for wind and storm damage, stood up to the derecho,” said the Iowa Manufactured Housing Association (IAMHA) statement to MHLivingNews.

Note that the IAMHA claims will be lined up with third-party information as well as a third-party video, further below. So those looking for objectivity – which is MHLivingNews’ goal – will be given a balanced view.

Troy Hames, whose Hames Homes was in the background of a report published last year, said that “We’re blessed to say the least,” about how well manufactured homes sustained the beating Mother Nature dished out in and around their communities. Hames added, “But, honestly, we’re not surprised.”

“Striking an area with a population of just over 130,000, the damage was overwhelming. Businesses saw structural damage to buildings and signage. Parks and rural areas lost up to 80% of their trees, and thousands of acres of crops will need to be plowed under. Residential areas seemed to fare the worst. Over a month later, many residents are still cleaning up fallen trees and thrown debris. But Hames’ communities, along with other manufactured home communities throughout the state, saw comparatively little damage.

“While common perceptions of manufactured homes would lead one to think hurricane force winds would be catastrophic, reality and the recent derecho proved otherwise. Out of Hames’ 900+ units, only three (3) were damaged beyond repair. That’s less than 0.5% destruction. Most units, like the surrounding residential areas on the Southwest side of the city, saw shingles and siding damage.”

Note that this isn’t just industry blather, as the video posted below shot inside a manufactured home community revealed. This video that follows was captured during the derecho storm. The video shows two big trees that topple. Debris is seen rolling or flying around. But even the older manufactured homes are standing strong and tall. Some foundation enclosure around one of those homes – commonly called “skirting” – is blown off, but the manufactured homes clearly appear to be structurally intact. That type of repair is quick and easy.

That fits the pattern that MHLivingNews has previously reported from third party research that includes the National Weather Service statement linked below, which includes the following video that predates the recent derecho.

IAMHA does a public service by shedding light on the regulatory reasons why the homes stood up to the punishment that the video and photos on this page reflect.

“Some external buildings like garages or sheds saw worse, but the [manufactured] homes themselves were safe and secure. Why?” the IAMHA release rhetorically asks – and then they provide the answer based on the law that regulates manufactured housing construction and installation.

Unlike the trailer houses that were built from the 1930s into the early 1950s, or the “mobile homes” that were built from the 1950s until the date in the 1970s shown below, today’s manufactured homes are subject to strict Federal HUD (Housing and Urban Development) construction guidelines. Based on HUD Code 3280 and 3285(2), “All … manufactured homes built in the U.S. after June 15, 1976 must contain a certification label (commonly referred to as a HUD Tag) on the home. The label is the manufacturer’s certification that the home section is built in accordance with HUD’s Manufactured Home Construction and Safety Standards.”

As it relates to the Midwest Derecho and why the manufactured homes in Iowa fared so well: section 3280.306 (a) on windstorm protection, states, “Each manufactured home shall have provisions for support/anchoring or foundation systems that, when properly designed and installed, will resist overturning and lateral movement (sliding) of the manufactured home as imposed by the respective design loads.”

According to a Cedar Rapids Gazette on August 18, 2020, Lon Pluckhahn, City Manager of Cedar Rapids suburb Marion, Iowa said, “Ninety to 95 percent of all properties in the city sustained some degree of damage.”

“This is where we have an advantage over homes built on foundations or even over basements,” said Hames. “HUD requires manufactured homes to have another level of structural integrity – being anchored with galvanized steel straps, at a minimum of four feet into the ground at multiple places on each home.” Note that a similar standard would apply to other inland areas of the U.S., and often stricter standards would apply to coastal areas where actual hurricane winds may strike. It should also be noted that neither IAMHA, nor MHLivingNews, claims that manufactured homes are tornado or hurricane proof. Rather, they are “resilient” to such storms, as HUD Secretary Ben Carson, M.D., said in a video in a report linked here.

“Where other construction throughout the area saw devastating damage ranging from missing roofs to complete upper levels destroyed by the derecho, the manufactured homes anchored through their walls and floor joists into the earth saw little impact from winds that reached up to 140 miles per hour and lasted over 20 minutes,” stated the IAMHA.

As Hames drove through his Summit View development in the southwest corner of Cedar Rapids, he described the manufactured home community coming together to clean up the damage that did occur. Weeks after the storm, debris from the storm had all but disappeared from the streets of the community, but some units were still waiting on insurance and contractors to finish up minor repair projects.

“These are good, hard-working people,” said Hames. “From first time homebuyers to retirees, we get to see every aspect of the community.”

Chad and Laura Curl, who have been residents in the Summit View development for over 14 years, stopped Troy to give updates on the recovery process for their residence. The Curls said their property sustained minor roofing damage and cracked siding on the exterior of the home, but nothing more from the derecho.

In stark contrast, directly across the street from their development was a twisted heap of metal girders and splintered wood from a manufacturing plant that didn’t survive the derecho storm.

“Mobile homes have gotten a negative stigma over the years,” said Laura Curl about their development. “Well, I rode [the equivalent of] a CAT3 hurricane out in mine, and it’s still here,” she continued with a wave of her hand.

Note that Curl’s home is a manufactured home, not a mobile home, but the terminology miscue is a common one.  A guide to correct terminology is found at the left.

The Curls were quick to point out that throughout their manufactured home community, it wasn’t the actual structures that received the brunt of the storm damage, but the ancillary construction – decks, garages, car ports not included in the original structure – that were impacted most. That fits the pattern found by insurance analysists and other researchers of hurricanes that have struck Florida, see the related report linked below.

“We can deal with a little cracked siding,” said Chad Curl. “It’s good to know we have a strong home in a strong community.”

Vinyl siding can be readily replaced.

While storms throughout the Midwest come with a litany of risks, the perception that manufactured homes are high risk investments because of these storms just doesn’t hold true, said the IAMHA release. The facts point out the accuracy of that claim. There are 70 times more deaths per year in American bathrooms than the typical risk someone faces of dying in a mobile or manufactured home from a hurricane or tornado. Out of some 22 million living in such factory built homes, a typical year around two dozen die during a tornado. But those deaths, said a NWS expert to MHLivingNews may not all be those in a home during such windstorms. The odds are about 500,000 to one in favor of a mobile or manufactured home resident, as the Curls experience made clear.

They noted that first-time homebuyers have the advantage of “lower-than-renting” entry points for homes that are around 1200 square feet with two or three bedrooms. That’s a fact that the National Association of Realtors (NAR) research by Scholastica “Gay” Cororaton in 2018 that focused on the value of modern manufactured housing also underscored.

Others, like empty-nesters, retirees, or those looking for more space and features find modern designs that can be over 2400 square feet of living space, granite countertops, hardwood flooring, all appliances and more. All new HUD Code manufactured homes tend to be about 1/3rd to ½ the cost of conventional ‘site built’ housing. Sometimes, the savings is greater.

“These aren’t your grandfather’s mobile homes,” said Hames. “A manufactured home is as safe and secure as most of the houses in the neighborhoods surrounding us, but ours come with community services like snow removal and storm shelters and much less upkeep.”

Joe Kelley is the award-winning executive director of the Iowa Manufactured Housing Association (IAMHA). The organization he leads was established in 1947. So the IAMHA has seen the evolution of the industry from the mobile home era into the early and modern HUD Code manufactured housing timeframes.

In a year when billions of dollars in damage from windstorms has occurred, there are evidence-based reasons for there to be peace of mind that manufactured homes are so durable.

Or as multi-millionaire manufactured home owner and Kid Rock indicated during an interview, if his manufactured home were to blow away by some chance in a big storm, he could always go out and buy another one and get it ready months faster than fixing or replacing a conventional home.