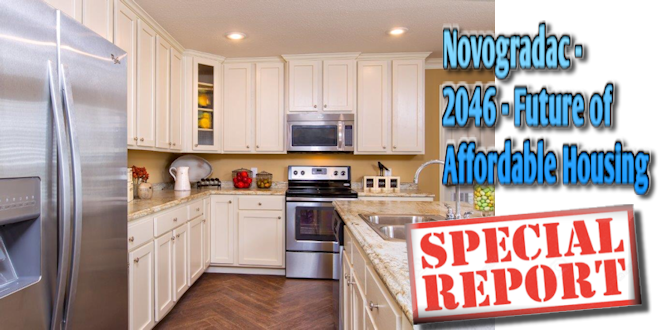 “I suspect that manufactured housing will finally become more cost-effective and will be prevalent in urban and suburban communities.”

“I’m struck by some of the inventiveness in the single-family home environment–like tiny houses and new forms of modular housing,”

As part of a new report released by CPA firm Novogradac & Company LLP, the operation contacted affordable housing industry experts about the impact of the Tax Reform Act of 1986, the Low Income Housing Tax Credit (LIHTC), and what affordable housing may look like in 30 years.

According to the report, the LIHTC is widely viewed as among the most successful federal housing programs in U.S. history.

Industry experts provided their predictions about the future and what could be done to produce a positive outcome.

“The future in this business tends to be next week, so it’s hard to wrap your head around the distant future,” said Tom Dixon, vice president, acquisitions at Boston Capital. “[Those in the LIHTC industry are] either working to save the credit, expand the credit or doing our day job.”

Dixon shared that near term tax reform will have a significant impact on the future.

“Because the genesis of the program was from the Tax Reform Act of 1986, when we have tax reform in 2017 or 2018, that bill will probably have a big say in how this program and affordable housing are in 30 years,” Dixon said. “That seems like the next big federal event.”

Executive Vice President at Bellwether Enterprise Real Estate, Phil Melton, believes the need to adjust should be based on the situation.

“My guess is that we’ll see the tax credit program still there, but we need to expand and increase the per-capita allocation for bonds and tax credits,” said Melton.

“We can’t [currently] keep pace with those most in need. I think we’ll see more cities using inclusionary housing, with developers having to use offsets or other ways to support affordable housing. There may be a more collaborative nature, with cities viewing affordable housing and homelessness as key policies to expand their workforce.”

According to Novogradac & Company, the idea of expanding workforce housing was a common theme.

“There is a need to address workforce or middle-income housing for incomes between 60 percent and 140 percent of area median income,” said Dixon. “Developing a program modeled off the LIHTC and that could–where appropriate–work with the LIHTC would help address this market while providing public and private-sector discipline.”

Manufactured Home Industry in the Spotlight

“I suspect that manufactured housing will finally become more cost-effective and will be prevalent in urban and suburban communities,” said Gerwitz. “I expect more mixed-income housing in 2046, due partly to inclusionary zone requirements.”

Speaking of manufactured homes and the land-lease community business, Landy stated that, “We provide that. We provide a better product than apartments, townhouses, condos and single family homes for our customers. Apartment rents have been increasing. Single-family home buyers now need down payments once again.”

“Given these changes and assuming that job growth returns, our [manufactured home industry’s] sales will be far higher” in the future than today, Landy stated.

“I’m struck by some of the inventiveness in the single-family home environment–like tiny houses and new forms of modular housing,” said Barbe.

She added, “I wonder if 30 years from now, we’ll be implementing similar ideas in our industry: maybe large developments of tiny houses used as multifamily rentals.”

A View from Washington, DC

“Manufactured homes, as America’s most affordable housing, can, should and must be part of the solution to the nation’s affordable housing crisis and part of every national program to remedy that crisis, both short and long-term,’ stated Weiss.  He points to recent double-digit sales growth as a further sign of the logic of the report’s prediction of industry growth.

The Novogradac report cites that the issue of rising development costs was seen as critical to almost all of the experts in their predictions.

“I worry about the economics of real estate developments and investments generally,” Barbe said. “Interest rates will go up at some point. The combination of higher land values, ever-increasing construction costs and higher interest rates will impact us.”

“We’ve really got to address the cost issue,” Tom Dixon said. “There are some markets where the costs are really out of control and the gap between them and others needs to be addressed. If you find out what’s driving the costs, it helps. It’s putting too much stress on state allocating agencies.”

“I’m not sure of the solution, but we need to put our best minds on the question of how to reduce construction costs,” Barbe said. “We’ve gotten better at designing attractive projects that blend with the community around them, but the costs keep escalating. Per-unit costs can be ‘through the roof’ and that is unsustainable.”

What Can Be Done Now

Experts suggested that proposals to expand the LIHTC credit and tweaks to facilitate increased production were actions that could be taken now to prepare for the future.

Bart Harvey, former CEO at Enterprise Community Partners and Enterprise Community Investment and a board member at Fannie Mae said that he expects the individual mortgage-interest tax deduction could be “vastly modified” in the near future and that “affordable housing advocates should fight to see that a portion of the money is reinvested in affordable housing and lower-income first-time home ownership.“

“People need to address the mortgage deduction sooner or they’re going to lose it to the Treasury,” Harvey said. “[The question is] whether it goes into housing or something like debt reduction. That’s a conversation that needs to be had.”

“I think the mix will continue to morph as different parts of the demographics shrink,” Tingerthal said. “We’ve seen homeownership levels stabilize at lower levels and I’m not sure we’ll ever get back, or should get back, to the pre-recession levels.”

“[In 2046,] there will be a lot of renters. Millennials will be middle-aged,” Tingerthal concluded.

Harvey says changing demographics in America – including baby boomer and millennial generations – are huge, but have different looks: Millennials have a minority majority and less wealth.

“I think the trends will change out of necessity and a different mindset,” Harvey said.

“Maybe there will be more community space and smaller units. Affinity groups will be together. There are more lessons to learn.”

While the experts agree that the future is potentially bright, they do so with caution.

“My darker thoughts are that appropriate changes aren’t made and the current morass will continue as it is,” Harvey said.

“I think we could see another period of riots that are serious and destructive to the United States. There will be more income inequality and the deterioration of civic life and the answer will be safety at all costs, which means things like more profiling, gated communities and rich versus poor, which won’t end well.”

Tingerthal says to beware of being sloppy.

“It’s important for the affordable housing industry to be extremely vigilant,” she said. “We need to pay attention to cost containment and not allow excesses to be included.”

“We have to be very cognizant of the image of our portfolio and be held accountable.”

Submitted by RC Williams to ManufacturedHomeLivingNews (aka – MHLivingNews).