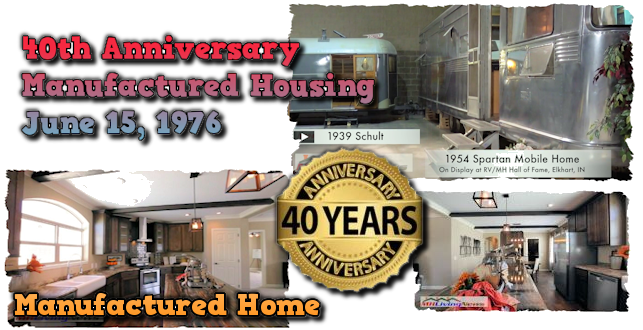 Lakeland, Fla. June 15, 1976 – Ever since the industrial revolution, factories have been a driving force in the economy — and in American culture.

Factories meant jobs, and they also meant access to quality, affordable goods that were once out of reach for ordinary people: everything from cars and clothing, computers and carpets, to furniture, appliances, watches, eyeglasses and designer handbags.

Factory-made was often perceived as superior to home-made. It was considered by many to be a status symbol — except when it came to factory-built homes, which have a long and often misunderstood history in the story of the American Dream.

These “trailer homes,” as they were called when they first came on the market, “were often built the cheapest way possible, at times with insufficient regard to durability or safety,” says Jay Hamilton, executive director of the Georgia Manufactured Housing Association.

That all changed 40 years ago today, when the first HUD Code manufactured home rolled off the assembly line, bringing an end to the era of the mobile home.

But the fact that millions of those 1950s- to mid-70s-era homes still exist today is silent testimony that they, too, often had enduring qualities. The well-kept pre-HUD Code mobile homes often sell for as much or more as when they were new.  It is the less cared for 40- to 60-year-old artifacts that often give local zoning officials heartburn and perpetuate the myths and confusion that surrounds factory-built homes.

Made for Americans, by Americans

The mix of people seeking affordable housing solutions led millions of post-war singles, couples and families in a historic embrace of the 1950s- and 60s-era mobile homes that had evolved from the trailer houses of the 1930s and 40s.

That form of housing officially “died,” when on June 15, 1976, the day the first federally regulated manufactured homes began to the sounds of nail guns and saws in production centers from coast to coast.  Low cost and mobility was the attraction of those mobile homes of yesteryear. The young and retirees were two large groups who often turned to mobile home living.

While some of those mobile homes were built to lower standards that led to the passage in 1974 of the Federal National Manufactured Housing Construction and Safety Standards Act, administered by the U.S. Department of Housing and Urban Development (HUD), there were millions of old mobile homes built more durably.

It was precisely that tension of uneven safety, energy and construction standards that caused industry to come together with Congress to act in creating what is commonly called the HUD Code for Manufactured Housing.

And it is the largely unregulated and sometimes unsightly mobile homes of the past that cause some people driving by them today to cringe as they confuse mobile homes with HUD-Code era manufactured homes.

Yet many people who could afford most any kind of home have found reason to celebrate and restore the older mobile homes, much like aficionados of classic cars — people like E. Jon and Pat Chione, a couple of retired snowbirds who traded in their fine townhome in Montgomery, Illinois for an updated mobile home in St. Petersburg, Florida.

“I didn’t want to spend my life keeping up with and paying for upkeep on that big place.” Pat Chione said.  “I wanted to enjoy life.”

The Chiones, who own a classic car and a classic boat, never dreamed they would one day live in a “classic” mobile home — until they spent a few days in one that belonged to a friend. They quickly discovered that the refurbished home and the Highland 55+ community it was in did not square with their preconceived notions about the MH lifestyle.

Not surprisingly, California has been extraordinarily progressive in its acceptance of factory-built homes and embracing the many benefits they offer everyone from modest means to millionaires — chief among them, huge savings on utility bills and property taxes.

Oldies but goodies like the mobile home the Chiones bought in Florida are hot properties in Malibu, where the rich and famous snap them up in beachfront trailer parks like Paradise Cove.

Here, among the kitschy 1950s-era trailers and extensively remodeled re-builds, “mobile home” is a nostalgic term of endearment.

A Matter of Choice

But for Sam Hancock, who lived as a child in an old metal house trailer, a home that came out of a factory was out of the question.

“I swore that I would never, ever live in a trailer the rest of my life,” he said.

Sam and his wife, Picanna, built a custom home in Orlando several years ago and were considering building another as a vacation home on Lake Kentucky, when they happened to look at a new manufactured home.

“We actually started looking at the construction of them, the amenities and that’s when my mind changed,” he said. “When I saw half-inch drywall, 2×6 studs — this is how you build a custom home.”

From a construction standpoint, studies have found HUD-Code homes to be as well-built and as much — or more — fire– and windstorm resistant than comparable site-built homes.

As Sam Hancock discovered, modern manufactured homes have come a long way from the rectangular boxes of his youth, which many people still imagine when they think of factory-built homes.

To be sure, some of the most basic “shade and shelter” HUD-Code homes still resemble the old boxes from the outside, but the interiors of even the least expensive models are a dream come true for many first-time homeowners.

And for half the price of a comparable site-built home, those who buy upgraded residential HUD-Code models can have a home that blends so well into the landscape of a neighborhood, they are practically indistinguishable from conventional homes.

They are, in fact, hiding in plain sight.

enduring cultural image that sometimes denigrates both the homes and their owners.

When some 22 million Americans live in pre-HUD Code mobile homes, or post-1976 manufactured homes priced at a fraction of conventional housing, one wonders why the media, the masses and public officials have failed to embrace it as robustly as those who now enjoy an affordable option for people from all walks of life.

Indeed, a Boston Globe editorial in June 2014 reminds us that there is a viable, appealing solution for cities, suburbs, towns and more rural areas across the nation — just waiting to be discovered.  ##