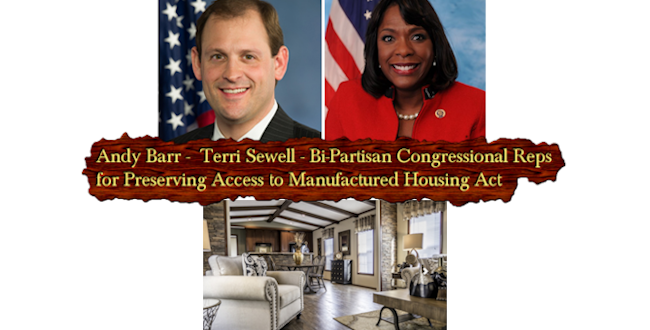 She’s a black Democrat from the deep South. He’s a white Republican from the Blue Grass state. They may seem to come from different places and viewpoints, but what brings them together is the clear understanding that manufactured homes are of vital importance to the citizens of their districts.

For the sake of current manufactured home owners and those housing shoppers who want to stop renting and start owning, both Terri Sewell (D-AL7) and Andy Barr (R-KY6) see things amazingly alike when it comes to manufactured housing (MH). In a few moments, you will see what each has to say in their own words on the subject of modern manufactured homes and the need to reform Dodd-Frank to support MH owners and prospective buyers.

Financing and politics can be complex for many. Those who oppose changes to Dodd-Frank do so for a variety of reasons, but one of them is ‘optics.’  No one wants to sound like they are against ‘consumer protection.’  In fact, this is a pro-consumer action  these Representatives have taken. While MHLivingNews is focused on manufactured housing, we keep an eye on what is happening in the broader housing market too. Conventional housing that requires loans under $50,000 face similar challenges to what manufactured home lenders face on loans of under $20,000. Community banks are also under regulatory pressure, many closing at a greater pace since Dodd-Frank went into effect. All of this impacts housing values for everyone, nationally.

So this isn’t just an MH issue! There is a common sense for ALL American. Because directly or indirectly, reforms needed in Dodd-Frank impacts you and those you know. That said, lets look at the specifics of what Congresswoman Terri Sewell and Congressman Andy Barr – among hundreds of others in Congress – have said and done.

On April 14, 2015, the House of Representatives overwhelmingly voted in favor of The Preserving Access to Manufactured Housing Act, known as H.R. 650. The vote was 263 for and 162 opposing, with only 6 not voting.

The bill was a bi-partisan one, and MHLivingNews believes the home buying public and manufactured home owners who will benefit should know why both Democrats and Republicans who voted for the legislation are supporting it.

Unlike other lobbying groups, manufactured housing is far smaller than giants like real estate agents or conventional housing builders. So it isn’t ‘PAC money going to politicans’ that motivates the votes of the women and men who supported manufactured housing!  It’s the conviction that what they voted for is the right thing to do for the people in their district and state, and thus collectively for the nation.

Here in their own words are the statements of Terri Sewell, who supported the bill, and a video of Congressman Andy Barr, who is also a co-sponsor of the legislation.

Washington, D.C. — Congresswoman Terri Sewell issued the following statement after the Preserving Access to Manufactured Housing Act (H.R. 650), a bill she co-sponsored to preserve critical access to financing for manufactured homes for low-income and rural families, passed the U.S. House of Representatives.

“The Dodd Frank Act was meant to enhance consumer protections, rather than limit consumer access. This bill corrects an unintended consequence of Dodd Frank and makes a simple but necessary adjustment to enable lenders to meet the demand for affordable, responsible mortgage loans for manufactured homes while preserving important consumer protections.

“Without this bill, working families and retirees with limited credit or fixed incomes will be forced into more expensive housing options. I am proud of the bipartisan support the Preserving Access to Manufactured Housing Act received in the House. Today’s vote underscores our commitment to preserving affordable housing choices for all Americans.”

Congressman Andy Barr’s office told us how important they believe this legislation is, and they provided us the following video.

When I spoke personally with Congressman Barr earlier this week, he had just finished giving a powerful address on why manufactured housing is so vital to millions of Americans. Barr told me how important this is to people he knows in Kentucky and the nation. Andy said he hopes the strong message the House sent will be heard and mirrored with equally strong bi-partisan support in the U.S. Senate.

The video his office provided are from the statements he made during the House floor debate, and clearly reflects his views on this subject.

For a deeper understanding of these issues and why they matter to you and others, MHLivingNews has previously provided these stories on this crtical issue.

It is important to remember that manufactured home buyers who go onto their own privately owned land, have the option to use the same kind of FHA, VA or USDA or other types of conventional mortgages. So why do so many informed consumers opt for personal property loans, when they could get mortgages with a lower rate?  There are many answers, but let’s share just one eye-opening point.

The Government Account Office (GAO) 2014 report on Manufactured housing provided the chart above. What it dramatically suggests is that manufactured homes are such a good value, that even when the interest rate on a ‘home only’ loan is higher than on conventional mortgages, you end up with a lower payment.

This one of many reasons why MH can work so well in a land-lease MH Community, or on privately owned land. This is why members of both major parties can strongly support common sense reforms, as have Congressional Representatives Terri Sewell or Andy Barr. We applaud them and their peers for their support of a truly bi-partisan issue. ##

“In short, depreciation in manufactured homes are neither inevitable nor is it necessarily a tragedy …