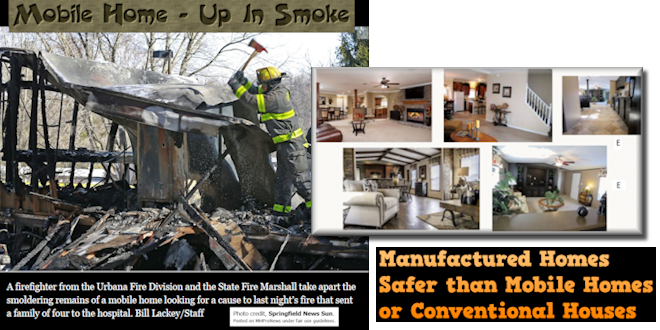 Every unplanned, uncontrolled fire outside of a fireplace, grill or pit is often a story about tragic injuries, deaths and/or property damaged or destroyed.

A recent fire reported in Champaign County, Ohio, was no different.  But that blaze and burnt-out mobile home shined a bright light on the differences between mobile homes, manufactured homes, conventional housing and why the proper words – terminology used by mainstream media or others – matters.

Per the Springfield News-Sun, firefighters were dispatched to the scene Monday at 12:15 a.m.  There they discovered the four victims, who had already escaped from the burning home, thanks to a smoke alarm.

The four were transferred by ambulance to Springfield Regional Medical Center.

“This fire involved a true mobile home and was not a manufactured home. I do not have the age of the mobile home available right now,” Urbana Fire Chief Mark Keller told MHLivingNews.

“Mobile homes are inherently bad with fire conditions. They’re not really designed to withhold any kind of fire,” Chief Keller said. He advised MHLivingNews  that the home involved in the fire was a total loss.

“Usually once a window is broken out, it spreads very quickly throughout the rest of the trailer [sic]. And that’s pretty much what we had happened.”

The National Fire Prevention Association (NFPA) clearly understands that using the proper lingo matters.  Trailer houses date back to the 1930s, mobile homes to the 1950s.

Starting June 16, 1976 began the manufactured home era.  There have been no mobile homes built in the U.S. since that date, and that is a fact that news media and the public ought to know, because the NFPA is correct.  There are differences, and those differences matter in how the various homes perform.

“As an Industry, we are always saddened to hear of such tragedies such as the fire that occurred in Champaign County,” said Andrea Reichman, Assistant Director of the Ohio Manufactured Homes Association (OMHA).

“As noted by the local Fire Chief Mark Keller, the home involved was a ‘mobile home,’ which indicates the home was built prior to the 1976 HUD Code Federal Manufactured Home Construction and Safety Standards,” Reichman said.

About 20 percent of all MH are pre-HUD Code mobile homes, so, the balance would be manufactured homes.

“While many ‘mobile homes’ are replaced every day some still exist. OMHA was encouraged to hear that the home had smoke detectors that were activated during the fire. The industry encourages homeowners to install and test their smoke detectors monthly per the recommendation of the National Fire Protection Association for all residential properties,” she told MHLivingNews.

The Industry View from Washington, D.C.

About 20 percent of all MH are pre-HUD Code mobile homes, so, the balance would be manufactured homes.

“While any harm to people or property is regrettable, there is no excuse for sloppy journalism that can harm the industry and consumers. The fact is that today’s federally regulated manufactured homes are as safe or safer than other types of homes when it comes to fire, as shown by research done by the National Fire Protection Association on multiple fire safety metrics,” said M. Mark Weiss, JD, President CEO of the Manufactured Housing Association for Regulatory Reform (MHARR).

Namely, that “sloppy journalism” can be harmful to the proper image and understanding of manufactured homes. 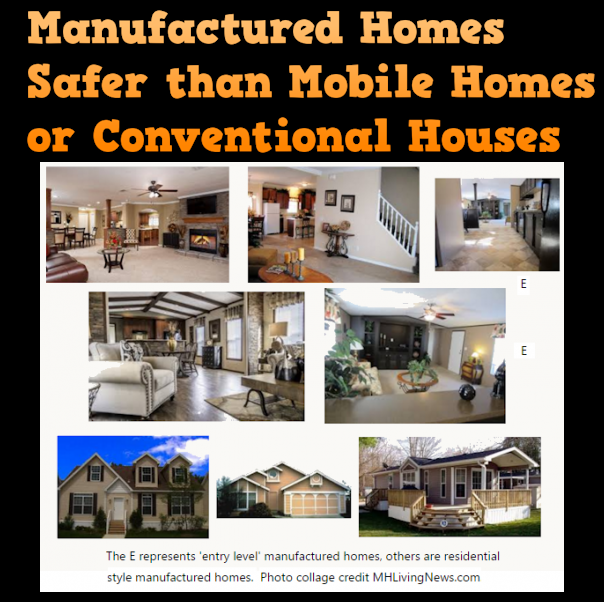 Inaccurate media coverage also deters some would-be home buyers of manufactured housing, who might otherwise purchase one if they realize how safe, appealing, energy-efficient, and affordable contemporary manufactured homes are.

“It is therefore misleading and a disservice to readers to fail to distinguish between pre-1976 ‘mobile homes,’ said Weiss, “and today’s manufactured homes. This is why MHARR successfully demanded several years ago that the U.S. Fire Administration remove similarly misleading language from it’s website.

“The industry and consumers need to insist on an accurate media portrayal of today’s high-quality manufactured homes,” said Weiss.

So the words used to describe a home matter, because mobile homes are not built to the same standards as modern manufactured homes.

As an MH industry wag told MHProNews, it’s inaccurate reporting that should go up in smoke – because compared to other forms of housing – modern manufactured homes more rarely do.  Still, prudent precautions such as smoke detectors ought to be followed, along with other safety steps reported in detail at this link here.

For more on the NFPA report on fire safety of modern manufactured home compared to conventional housing and mobile homes, click here. ##

Submitted by RC Williams to MHLivingNews.