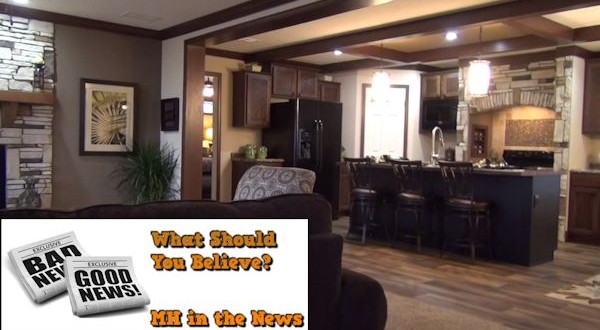 If you just want to see the latest Inside MH video and want to skip all the discussion of MH in the news media, please feel free to jump to the bottom, where the newest video is awaiting! For those who want to dig deeper, and better understand what sometimes happens with MH in the media, let’s begin by stating the obvious.

We are online trade journal publishers, which is a specialized type of news media. What that means is that unlike other news outlets, we are experts in a variety of factory-built homes as well as manufactured home living in general.

So when MHLivingNews sees what looks like “bad news” stories in the mainstream media, we take a clear-eyed look, to make sure that the reporter or others involved in the story are reporting the facts fairly and accurately.

It’s deliberately slanted media stories by some reporters that we object to – and we have and will call out such unfair reporting – either on our business-focused MHProNews.com and/or here on the public-focused MHLivingNews.com websites.

But let me be equally clear.  We don’t defend truly bad behavior by professionals associated with the MH industry. Quite the opposite is true; when what seems to be clear-cut bad behavior by an MH professional occur, we report it.  Thankfully, there is not much of it. The clear majority of MH owners and long-term professionals I’ve met are good people. But we have and do report examples of professionals who may – for example – cheat or try to take advantage of consumers.

Here below are three links to stories we’ve done over the years as examples of us showcasing the sad things that have happened in MH, and which frankly happen in ANY profession. There are often a few rotten apples in almost any big basket, so it is no surprise that some consumers are sadly taken advantage of by unethical people.

The moral is, the reporter, researcher or buyer must use good judgment. That said, the bad behavior of a few should not become the cause to unfairly judge the entire industry unfairly. I had a dentist last year who took me – and hundreds of others – for a bad ride. The story about that dentist ended up in regional news.  Should I therefor demean or attack all dentists, because of one “bad apple?” Of course not.

For those who want a fair and just world, they judge those who truly misbehave.  They ought not throw the good out with the bad; we don’t condemen those who serve well; that’s true for dentists, media/journalists, manufactured homes (MH) or any profession.

There is no need and no excuse for bad business practices in MH! Because when today’s manufactured homes are properly understood and presented to the public, many are amazed at the quality and value. More than enough good people want to buy an MH for private property or to live in a nice community, as some 20+ million Americans already do.

What are the causes of poor journalism about MH?

In news reporting, bad news often leads. There is an expression in the newsroom, “If it bleeds, it leads.”  Another cause of poor journalism is what some have called advocacy journalism.  There are also commonly held beliefs, which reporters and editors may errantly pass along, not realizing that they may be commonly held, but that doesn’t make them in fact true. More on those later, but first…

Bad news tends to get preference over good news with that “if it bleeds, it leads” kind of media mindset. For those in the news business who are into the sensational, they may focus a report about that 50 year old mobile home that got rolled over by a tornado and resulted in a death, and fail to say that the odds are 5 to 10 million to one in your favor on a given year that the same won’t happen to you as an MH owner! Or a reporter may focus on that “mobile home,” instead of a conventional house destroyed by that same windstorm, even if that conventional house may be newer and costs many times more than the MH.

To learn just how durable a properly installed MH is in a windstorm, see the NBC News video and related report by experts on the subject, linked here.

Mobile home fire stories will hit the local news from time to time. There are lots of causes of fires, most of them being human carelessness or in some cases, arson. Pre-HUD Code mobile homes (defined as a factory constructed house on a metal frame built before June 15, 1976) is more likely to have a fire, but modern manufactured homes are safer against a fire than even conventional housing, please see the report by the National Fire Prevention Association and related story, linked here.

Be it energy savings, financing, or a range of other issues, the truth about today’s manufactured homes is overall positive.

But if you watched the PBS NewsHour’s video report, or read the Seattle Times/BuzzFeed, you may not know that is true. So we watch for media reports that have an agenda or unfair slant, take a closer look and when we find poor or shoddy journalism, we spotlight it. That allows the thinkers out there to see the whole truth, not just some slanted part of a hyped story.

Now, let me render a professional opinion on what may motivate the PBS/Seattle Times/BuzzFeed style of media reports, noting that my view is based in part on evidence like what will be described and documented, below.

To rephrase, Carla Burr has an agenda.  The group Burr is part of is known as the NMHOA, or National Manufactured Home Owners Association. The rather small group claims to speak for millions of manufactured home owners. We can dispute that claim another time.

This past weekend, I invited via email Ishbel Dickens, an attorney who is the Executive Director of NMHOA, and copied Tim Sheahan on the topic of Carla Burr or Ms Dickens to debate me on the issues raised by the PBS NewsHour video (linked here).  The proposed setting for the debate was early February, during my upcoming trip planned to Washington, DC.  Key points of the offer to debate were as follows:

Ishbel Dickens formally declined yesterday evening. Why? Two follow ups – to once more encourage her or Burr to agree to the debate – has drawn no reply as of the time of we published this article (at 1.12.16 @ 22.37 ET). We will update as needed, should NMHOA/Burr/Dickens later accept.

Let’s use some common sense.  If Ishbel Dickens, Carla Burr or NMHOA’s leadership believed the truth was on their side, why would they decline to debate?  If they want to prove their talking points, why not do so in a clear-cut and public way, once and for all?

Isn’t it obvious that they have no desire to debate, because they feel they get more mileage by finding friendly reporters in the media to carry their message, even if their NMHOA message is flawed?  By the way, that doesn’t take the editors of said reporters off-the-hook.  Anyone who saw the report on PBS and wanted to look at it objectively would see that it was 4 against 1, and our sources tell us that some key points made by Dick Ernst were left out of the edits in their video.  Can you spell, “Exhibit A for biased media in a report about MH?”

Note too in Ishbel Dicken’s reply, see the attached from the link below, that she tied the Seattle Times/BuzzFeed takedown together with the PBS NewsHour, which was the actual subject of discussion.  Care to bet that the same forces – including NMHOA – lobbying against legislation pending in Congress were behind or involved in the reporting on both stories?

See Dicken’s complete message, and my first as yet unanswered follow up message, at the download linked here.

Against that controversial media coverage backdrop, I asked our videographer, Charles Drake, to do a short feature that highlights what real people think about manufactured home living.

I asked Charlie to include the kinds of points of appeal, to help others see why millions have chosen this lifestyle. In the video below, you’ll see real estate agents in this who have taken the time to understand our homes and who clearly respect MH. You’ll see real home owners, who love their homes, location and lifestyle.  While this video is about a specific community that is well managed and cares about their residents, you can find others like them – or good MH retailers – in a market near your desired location.

Let me close with the bookend to how we opened this column. Sure, we love MH, just as a good dentist loves his profession, and just as any other professional ought to love their career too. So yes, I’m proud to lead the top 2 MH trade media resources for manufactured housing online. Our team strives to present a story honestly. We don’t make false or exaggerated claims, like MH can leap a mountain.  We just state the facts in ways that we hope will enlighten and yes, entertain you too.

MH costs less than comparable new construction; according to U.S. Census Bureau figures, its only about half the cost on on-site building. We state the facts that MH is as strong or stronger; says who? Experts like Bill Matchneer, JD – the man who oversaw the federal manufactured housing program for many years, see that video interview, linked here.

We know the experts, and those who know, respect and value MH.

With affordable housing at crisis levels in many markets – and with local, state and federal budgets bursting – the need for quality affordable living provided by manufactured homes is an amazing tale of what makes America great. That should be the headline! That headine should be found in your local paper or TV station, to the national media, and all other news sources too.

Bottom line?  You can live better when your quality, durable and appealing home costs less. ##