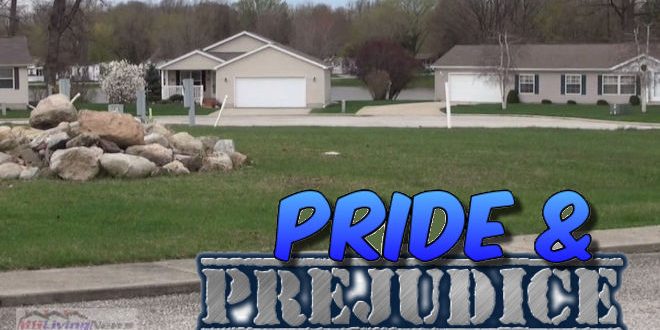 Pride and Prejudice: The Truth About Manufactured Home Communities and Crime

“Some had lower rates of crime than you would expect, because they had pride of ownership and the shared backgrounds of residents.”

And yet, many local governments throughout the land, spurred by neighborhood activists, are working relentlessly to block new manufactured home communities through zoning and other ordinances.

The latest skirmish played out recently in the city of Del Valley, Texas, near Austin, where citizens lined up to oppose rezoning of 10 acres for use as a proposed manufactured housing community — which some of the more vocal opponents referred to using the pejorative misnomer “trailer park.”

Terminology matters, say industry experts, because terminology defines the construction standards by which the homes are built.

Trailers, which are basically recreational vehicles, are not the same as mobile homes — and neither bears little more than a passing resemblance to the manufactured homes built to a federal code set forth by the U.S. Department of Housing and Urban Development (HUD) in 1976.

The HUD standards improved the quality and appearance of manufactured housing and ushered in an era in which factory-built homes became a legitimate source of affordable housing.

But construction codes, enhanced safety features and energy efficiency have little to do with the NIMBY factor driving the current wave of opposition to these communities.

The primary objection to the new Texas development, as reported in the Austin Monitor, was bluntly voiced by Patricia Burton, president of the homeowners association for a nearby subdivision:

It is a sentiment echoed in other city council and county commission chambers, where perceptions appear to carry more weight than objective reality.

According to one 2009 study: “Contemporary mass media and popular culture have portrayed manufactured home(s) … as filled to capacity, unsightly, and hazardous. The inaccurate and negative media messages have represented manufactured homes as objectionable places and environments occupied by people with personal and cultural deficiencies.”

For some 23 million Americans who live in manufactured homes — from low- and middle-income families, to frugal millionaires — the stigma is as baffling as it is enduring.

In many instances, it is a case of mistaken identity and an artifact of the past.

“It’s the places that have been around for 50 or 60 years — those are the kind of places that reinforce the stigma,” says William McCarty, an assistant professor of criminology at the University of Illinois at Chicago.

McCarty is one of the few researchers who has studied the incidence of crime in proximity to manufactured home communities.

His laboratory was the city of Omaha, Neb., where the researcher visited as many as 20 communities and spoke to residents in all of them.

He identified three types of communities:

On the upper end of the economic spectrum were places where residents purchased their home and, in some cases, the land, as well.

Then there were the mid-level communities, where the homes were owned and the land they occupied was leased.

At the lower end were parks where residents owned neither the home nor the land.

“Obviously those places that have less investment in the asset is where we would see more issues, more transient populations — just like an apartment complex, except the apartment would be the manufactured home,” he says.

Crime rates within those communities that did have “issues” were slightly higher than comparable neighborhoods, but not statistically significant when adjusted for population and other factors, according to the findings of his 2010 study, “Trailers and Trouble.”

But even these issues were contained within the parks themselves, McCarty says.

“Those folks who argue those issues are going to spill over into surrounding neighborhoods — we didn’t find any evidence of that.”

What he did find, was a correlation between higher rates of crime and “very lax management.”

Those places that had good onsite management and handled interpersonal conflicts, “They had many, many fewer problems,” says McCarty.

An onsite manager that responds to residents in a timely manner, who screens new residents, and who enforces rules can minimize the problems that may arise inside a community, he says.

“When you have two people on a lease and 10 people are living there — that’s something a manager can deal with.  Some of the problems involved people who are not even legitimate residents.”

Not in My Back Yard

With 3 percent of the population living in the nation’s more than 40,000 manufactured home communities, “Clearly this isn’t something that should have a stigma,” says McCarty.

And yet it does.

She cites one 2010 study that notes laws restricting placement of manufactured homes have presented obstacles unique to the product.

“These early restrictions contributed to the perception of the product as a threat to real estate values and the community’s moral character (Aman & Yarnal, 2010).”

This is an important distinction with implications for future zoning decisions.

McCarty, whose studies over the years have shed light on the misperceptions about crime and so-called “trailer parks,” compares those communities to apartment complexes, in terms of a concentrated, somewhat transient population whose well-being depends on good management, enforced rules and vetting of residents.

If done properly, manufactured housing can be better than apartments, because usually people have an asset that they don’t have in an apartment complex, he says.

“It may not be a $150,000 house, but, ‘I own it and I want it maintained well.’ I would have a pretty large stake in keeping this community viable.”

Even in lower income scenarios, “trailer parks” have many advantages over traditional public housing clusters, which tend to mitigate criminal activity.

“They’re on the periphery, not surrounded by poverty areas in the middle of a city,” says McCarty. “In the research they talk about the extremely disadvantaged community, but manufactured housing is not in that category.”

And yet, zoning officials and neighborhood activists who oppose a new manufactured housing development in their back yard often have no objection to a new apartment complex or mixed-use development being approved for the same location, as was the case in Del Valley, Tex.

Despite evidence that disproved misconceptions and negative perceptions of manufactured homes and their residents, negative stereotypes continued to influence local governments to impose regulatory restrictions on this type of housing, Tyler writes.

Her study, she says, reveals the need for increased awareness and education to overcome deep-seated and misguided assumptions about these communities and the people who live in them.

“However, the industry lacked a concerted effort to increase consumer awareness and education that eliminated NIMBY opposition.”

Says McCarty, who has conducted the only real studies on the matter: “I found no evidence that these communities are bastions of crime and disorder.

“To me, when you have the discussion of cities and municipalities about whether a new one should be built, these are gonna be nice places.” ##