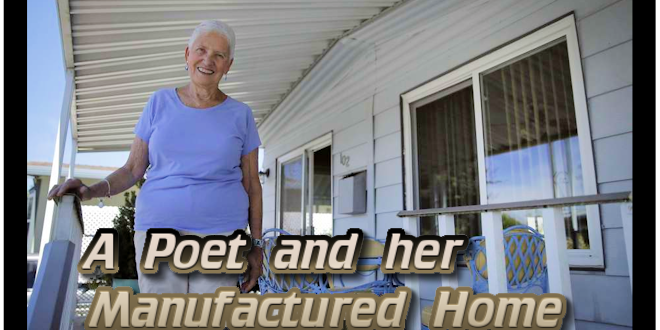 Lois Requist, in her new home in Rancho Benicia, a senior community in Benicia. Requist said she received some unfavorable remarks after she sold her marina condo and chose to buy a “tindominium.” Credits – SF Chron, text on photo by MHLivingNews.com.

Taking on the Trash Talk! Are People Defined by their Housing Choice? Video, Photos

Lois Requist is retired.  She’s an author, and the former Benicia, CA poet laureate. She recently moved into a manufactured home in a community in San Francisco metro.

Terry Reynolds has a manufactured home too. Reynolds and his wife own a triple sectional, Requist has a more modest, yet still appealing, multi-sectional. Each has a story to tell, and we want you to hear his story in the video below, shared in Reynold’s own words.

There are frugal millionaires and movie stars living in gorgeous, custom manufactured homes. Are they ‘tr–ler trash?’

We’ll share Reynold’s story in the video below, but let’s start with our lady poet first; please read her letter to the editor of the San Francisco Chronicle, shared below.

Does my choice of housing define me?

I’m downsizing for the second time, and some folks think I’m “stepping down.”

I wanted to stay in downtown Benicia, a riverside town in southern Solano County. In the years I’ve been here, I’ve left the world of getting in my car every time I want to go somewhere. I looked at the options, which were limited. The one I chose raised a few eyebrows.

Rancho Benicia is a highly rated and gated retirement community (55 and older only), very well kept, with a pool and hot tub, a clubhouse and many activities for the residents. It’s almost crime free.

It’s a mobile home park. A block from the Benicia Marina, it’s often seen as another world.

“Trailer trash? Is that what you’ve come to?” someone asked.

“That’s really stepping down,” my brother, who lives in Idaho, said.

My former neighbor from Moraga said his mom once talked about moving to a mobile home park. “No mother of mine is going to live in a trailer park,” he told her.

My son is visiting from Colorado next month and will see the new place as the remodeling is under way, but both of my sons know of my plans. Neither has expressed any skepticism; just encouragement for thinking about my future and making it what works for me.

I’m 77, and though I’m very healthy, I began to realize that the steps to my former home, a second-floor condo, could become a challenge. They already were for some of my friends, or when I had to carry heavy items like suitcases up and down. So, I thought about downsizing again to a “level in.” No steps.

What was referred to in the ’40s and ’50s as a “trailer park” was often portrayed as a place for poor, low-life types, such as the three felons in the movie “Trailer Park Boys.” In the ’60s, the term “mobile home” came into use. Along with manufactured homes, they became popular with retirees, especially in Florida and Arizona, and as vacation homes throughout the country.

Who lives in such homes has changed dramatically over the years, though the stereotype of “low-lifes” still persists.

To be honest, I had some negative reactions myself when I first considered Rancho Benicia. I thought about my friends in Moraga, Walnut Creek, San Francisco and Idaho and felt some misgivings about what they’d say. Good friends of mine, who had lived near me in the condo, moved to Rancho Benicia last year. They worked with an interior designer, and had the entire inside redone in their style. It’s lovely. They refer to their place as a “tindominium.”

And what they’ve invested in the kind of housing that is often looked down upon would buy a spacious home in any of the fly-over states and some parts of California.

Even when I moved from Moraga to Benicia, my Realtor said, “You won’t find as many intelligent people there.” I’ve been in Benicia since 2000 and have never lacked for stimulating companions.

At that time, I exchanged my four-bedroom, ranch-style house where I’d raised two sons and lost my husband to cancer, for a two-story condominium on the Benicia Marina, with a view of the Benicia Bridge and the Carquinez Strait.

Those who drive by Benicia on Interstate 680 see a refinery and an industrial area. That view doesn’t take in the historic downtown on the water’s edge, the yacht club and the marina. Once the state capital, Benicia still has the building where the Legislature met, along with many charming, old homes. First Street, the commercial hub, has many restaurants, shops, art galleries, wine and sports bars.

It’s a great place to live. I walk to coffee three mornings a week, to restaurants, shops, the library, the post office, the grocery store and the gym, where I practice yoga. All that is part of what keeps me healthy. Beyond that, I relate to the people in my community differently when I see them in person than I do when I’m a driver in another car.

I’m doing a complete redo of my new home and yard — I want flowers, which were a challenge in the condo where I lived. I’ll also be more free to travel and do the other things I’d like to do. Who knows how much time I have? In any case, looking at a short horizon for living in some ways increases one’s vision of what’s important.

So while some may be hung up on the cultural stereotype of mobile homes as “trashy,” I see myself living in a cottage surrounded by flowers, in a safe community, with access to the whole of downtown Benicia and beyond that, the rest of the Bay Area and the world. That’s not bad.”

Terry Reynolds’ story – told in the video above – is another example of how a clearly savvy man now has a fine manufactured home that others admire.

“Neighbors were impressed,” Reynolds said. “They would swear up and down that it was a stick-built home and it’s not.”

Reynold’s home is located in a development with conventional houses that he says range from $300,000 to $400,000, double or more what he has invested in his home. Yet visitors to his home can’t tell the difference between his residence and that of others in the same location.

A conventional builder who used to ‘hate mobile homes’ who took a closer look at modern manufactured homes is now a true believer. In discussing the what’s the right name to call a factory built home, Stacey Epperson says that, “A home is a home, it’s as simple as that.”

Retired nurse Mary Johnson told MHLivingNews’ producer and publisher L. A. ‘Tony’ Kovach off camera, that she is not “trailer trash.” Quite right. When thousands are homeless in the SF Bay Area alone, and millions more are struggling with housing affordability, Lois Requist’s choice makes great sense.  Part of what’s so impressive about modern manufactured homes, you can get an entry level ‘shade and shelter’ home, that may not be as fancy as Reynold’s, but still is comfortable, safe, solid and Dr. Harold Hunt says, are energy savers.

What about the millions of middle class households who live in beautiful manufactured homes that look and live like housing that costs double the price?

We should celebrate the value that Americans like Lois Requist have discovered. They should be respected. Their homes should respected and appreciated too.

Isn’t it time that we all learn how to take out the “trailer trash” talk? ##

Share
Previous Bloomberg, HousingWire, Realtor and Fox all suggest Manufactured Homes as Important Solution for Affordable Housing in America
Next Pride and Prejudice: The Truth About Manufactured Home Communities and Crime