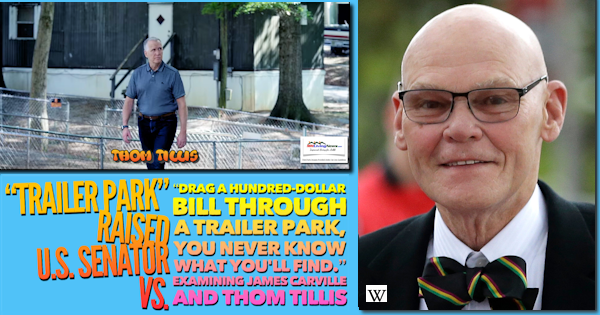 The first phrase in the headline using the term “trailer park” is from U.S Senator Thom Tillis (NC-R). He says “trailer park” as a point of some pride to underscore his humble roots. For Tillis, “mobile home” and “trailer park” and rental housing are not pejoratives, even if he is arguably and obviously misusing the terminology. The second headline quote is from the “Ragin’ Cajun” James Carville, who used the term pejoratively to deflect from the then-growing scandal of accusations from various women against Carville’s boss, then President Bill Clinton.

Carville is still very active in Democratic politics, appearing on left-of-center CNN and MSNBC, as well as right-of-center Fox News.

There is an old saying that two wrongs don’t make a right. One of the most offensive terms for someone living in a mobile or manufactured home is “trailer trash.” 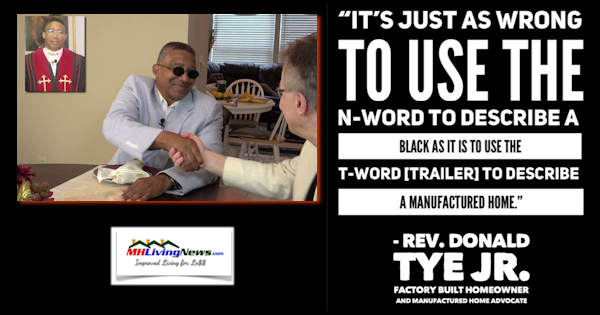 It is always misguided, prejudiced, and wrong. This site celebrates affordable manufactured home living, while candidly exploring sometimes dark and troubling issues. When millionaires and billionaires embrace manufactured homes, when the rich and famous accept these affordable housing gems as their own primary or secondary residence, that should speak volumes to all Americans.

The point from this headline topic is not the specifics of the two politically charged reports linked above and below, both of which involve mobile and manufactured homes and each including reported – and largely confirmed – sexual scandals. It is worth noting that in the politically charged sex scandals linked above, President Clinton eventually acknowledged some level of wrongdoing after initial denials that Carville apparently aided the former president with. In the case linked below involving Senator Tillis, the scandal isn’t his own. Rather the furor is Senator Tillis’ rival for the hotly fought North Carolina Senate race that has witnessed tens of millions poured into the contest by Tillis’ opposition.

MHLivingNews has also noted that ideally manufactured homes and issues involving affordable housing in general should ideally bipartisan or nonpartisan. By definition, affordable home living is a necessity, not a luxury.

As the leading manufactured home trade publishers in the U.S., it would be foolish and irresponsible not to highlight manufactured housing related topics when they come in political contexts.

We have and will continue to extol the benefits of manufactured home living, while exploring the business, cultural, political, and other issues that impact this often-appealing way of life.

That said, the general appeal of manufactured housing must not be used as a cloud to exploring problems that exist in the manufactured home industry. To learn more about the good, the bad, and the ugly, see the related reports linked above as well as those below the byline and notices.