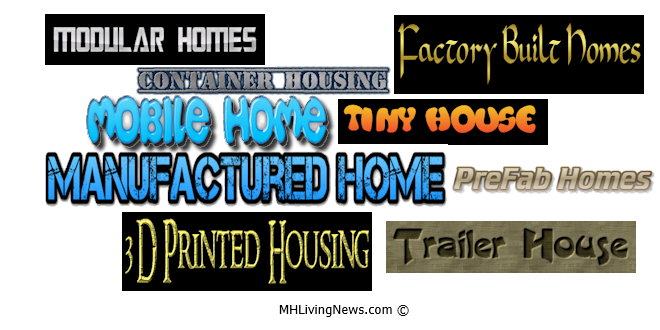 “How many legs does a dog have if you call his tail a leg? Four. Saying that a tail is a leg doesn’t make it a leg.”

Word, ideas, and their meaning matter.

There are countless views and opinions on the various types of factory-built housing. The purpose of this article is to be an accurate resource for home owners, housing hunters, professionals, investors, media, public officials, and researchers who want the facts – not opinions – on correct terminology.

Because the words matters, as you will soon see.

This will show you what the correct words are in the factory built housing world, what they actually mean, and why using the right words is important.

Duke’s point is that the words used makes a difference.  After all, you wouldn’t call an SUV a truck – or shouldn’t – because they’re not the same thing.

That ‘SUV is not a truck’ principle applies to manufactured homes, which are so often still referred to as ‘mobile homes,’ – or worse – as ‘trailer houses.’

As the National Association of Fire Protection (NFPA) correctly said, those common usages are incorrect.

Legally and factually, there have been no mobile homes built since June 15th, 1976.  That’s when what is known as the HUD Code for Manufactured Housing went into effect.

The mobile home industry died, and was reborn as a federally regulated manufactured homes.

Those standards are what changed what was mobile homes – that often had no standards – into manufactured homes.

The birth of the manufactured housing industry changed the affordable housing market – forever.

Manufactured home construction is a set of federal standards, but Betty Whittaker with the Kentucky Manufactured Housing Institute (KMHI) also notes that it is a process for home building.

Those federally established manufactured housing standards are known as the HUD Code because the U.S. Department of Housing and Urban Development (HUD) is the main regulator of manufactured home construction. 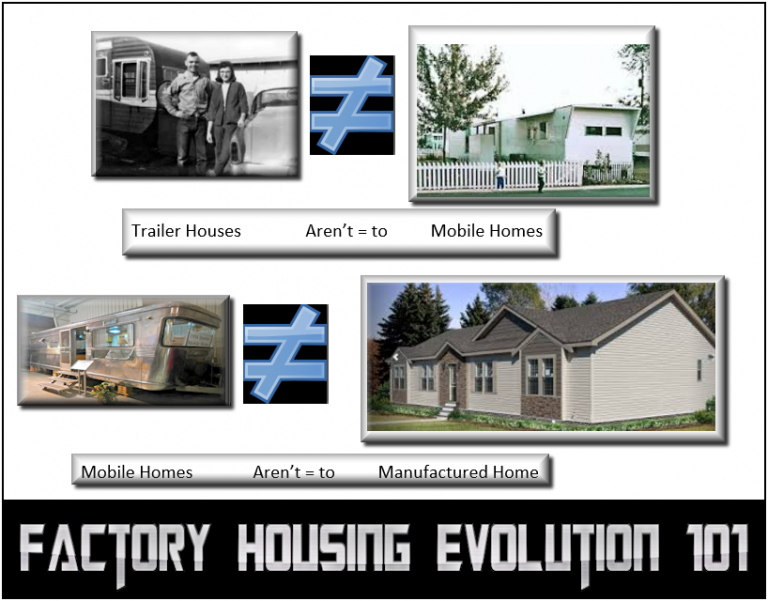 Times Have Changed Since the First Manufactured Home…

Some may think, ‘well if those regulations were put in place in the mid-1970s, then how can one know they are still good enough to ensure the safety and durability of today’s manufactured homes?’

The answer is there have been several code updates, as has also happened with conventional ‘on site’ building – or what some call ‘stick built’ housing – construction codes.

The Manufactured Housing Improvement Act of 2000 (MHIA 2000) – further enhanced and modernized the standards and requirements of manufactured home building and installation.  It established new standards based on current technology.

The MHIA 2000 also provides for the process for continuing improvements, so that manufactured homes perform dynamically as well as conventional building in safety, energy, and construction standards.

The MHIA 2000 law provides for a process that simplifies the building, to make construction faster, greener, and thus more money saving.

Other Types of Factory Built Homes

Of course, manufactured homes are not the only type of contemporary factory built housing.  There are also modular homes, prefabricated (prefab) homes, tiny houses, container housing, and 3D printed houses too.

The following will help clear up the confusion about these different terms, and what exactly defines each of them.

All manufactured homes are built to the standards of the HUD Code. They are third party inspected for compliance with that federally preemptive code before being transported to and installed on a buildable home site.

Installations standards must meet state and federal guidelines, and states or local jurisdictions routinely inspect installations. There is some variation on installations and other standards from state to state.

Manufactured homes are being routinely inspected by both the factory and third party inspectors hired by the federal government while under construction indoors.

Manufactured homes are mostly finished – about 90 percent complete – in the factory. They are then transported to the home site on a permeant frame/chassis with its own axles and wheels.

Unlike mobile homes of the past, manufactured homes are not typically moved once they are installed on a home site. The wheels and axles are routinely removed, even though the steel chassis under present guidelines is not removed. (4)

The U.S. Census Bureau reports that manufactured homes are typically about half-the-cost of a similar size and featured site built house.

Each kind of loan has its own advantages, which can be discussed with experts, and is the topic for another article.

Some factory-builders specialize in modular building, some do both modular and HUD Code manufactured homes.

There are two different ways to build and transport a modular home – on frame, or on flatbed.

With a modular home, if a chassis/frame is used, it can be removable.

Modular homes are about 80 percent completed in the factory, the balance of the work is done on site.

Modular homes are built to a state or local building code, and not to the federal HUD Code (5). So a modular home and a manufactured home are different.  The two terms should not be mixed.

MODs are subject to the same building restrictions as any other site-built home.

Modular homes transported via a flatbed are most commonly installed using a crane.

On-frame modular homes shipped on their own chassis can be installed similarly to a manufactured home, which can reduce the cost of installation.

The cost-savings for a modular home is usually around 10-25 percent compared to a similar size and featured conventional house in the same area.

Prefabricated construction is often used as a blanket term that covers all types of factory built housing, including manufactured homes and modular homes.

Also, every modular home is a prefab, but not every prefab is a MOD.

Why?  Because prefabs can also mean a home that is built in panelized components (6).

Panelized homes have all the panels, trusses, and walls built in a factory. They are transported to the building site, and then assembled panel-by-panel using cranes or other lifting devices.

While the process is similar to that of a modular home in the sense that it begins in a factory, the price is usually higher because they take longer and more equipment to assemble on site.

While modular and manufactured homes are built in cubes, panelizing at present can technically allow for more flexibility in design.

There are factory built tiny houses, as well as tiny houses that are built on a location.  So not every tiny home is a prefab.

Tiny homes are usually between 100 and 400 square feet (7) – significantly smaller than the average ‘stick built’ home.

At present, most tiny houses that are not factory built may be built to no code at all. That is changing, but one reason that tiny houses can be hard to finance is precisely because there are a lack of standards and zoning challenges.

When a tiny house is factory built, it may be built to no-code, to the ANSI or other codes.  If a home is built to the HUD Code, it must be at least 320 square feet and comply with all other HUD Code standards.

So, a small number of tiny houses today are manufactured homes, some are MODs, but most tiny houses at present are neither.

In a sense, a tiny house is more like the mobile homes of the past.  Many are built on a frame, and are movable with a properly-rated pickup truck.

Container housing is usually made to comply with a local or state building code.

Another new trend is 3D printed houses.  At first, that may sound crazy to those who have not seen this process.  But 3D printing really is being used in a variety of fields, including automotive replacement parts.  3D printing appears to be a growing part of America’s and the world’s future.

Several experiments with 3D printed houses have been done. How soon they may be commercially available is not known, but 5 to 10 years is a common number that experts use.

A start-up in San Francisco proved the potential for this when they built an entirely 3D printed house in less than 24 hours (8).

Technically, RVs – Recreational Vehicles – are generally made for vacation, rather that permanent living. They are not the same as a manufactured home, nor a modular home. They are routinely less than 400 square feet in size, before slide-outs or other extenders are calculated.

With the regulations in place to ensure that manufactured, modular, and prefab factory-built homes are built to standards – they provide the peace-of-mind on issues such as safety, durability, and comfort.

Third party research demonstrates that today’s manufactured homes are the best value for new housing on the market.

Beyond Codes, Why Does Terminology Matter?

For far too long, people have been stereotyping other people, and other things.

Tye knows, because he grew up working in the factory built home industry.  He and his family still live in a factory built home.  In an upcoming video interview that Inside MH will produce, he explains that they lived better, because their home cost less.  They paid it off more quickly.  The money saved allowed them to do many other things in life.

People do not want to be put down for where they live, how they look or for any other reason. There is no reason to put someone down for living in an affordable quality home.  In fact, we should celebrate those who live frugally!

It’s been about 60 years since a trailer house was built.

It’s been 41 years since the last mobile home was built.

If you live in a true mobile home, that only proves they were built well enough to last for 41 years or more.

Trailer houses could be pulled by a car or light truck, like the old Lucy-Desi movie, The Long, Long Trailer.

If you are selling a manufactured home, and call it a mobile home, you are reducing the value of your home by mislabeling it.

Third-party studies – including federally commissioned, university level research – proves that a manufactured home can grow in value based on the same factors that cause any housing to raise or lower in value.  Market conditions, access to financing, condition of the home and location are all factors for appreciation (or depreciation) in value.

If we only used proper terminology for these types of homes, then people might start to move away from the stigma that “mobile homes” and “trailers” of the past still leave many of us with decades later.

Factory made appliances and electronics.

“Everyone is entitled to his own opinion, but not his own facts.”

– Daniel Patrick Moynihan (1) Take the time to learn and use the facts.  ##

(1) The top variation of this quote is from GoodReads, the second variation is from BrainyQuotes.

(4) The industry has been making the case that there is wisdom in allowing a permanently installed manufactured home which allows the chassis to be removable too, just as the wheels and axles are removable. HUD has not yet complied with that request, which has been ongoing for several years. 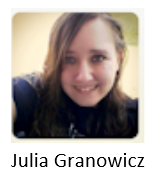 Submitted by Julia Granowicz to MHLivingNews.com. 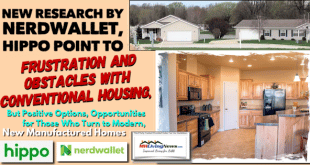 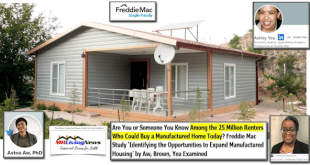 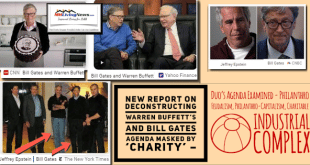 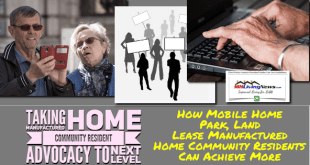 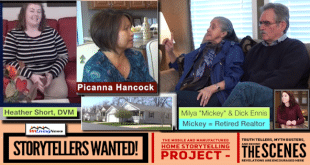 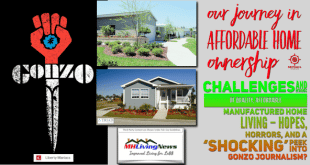 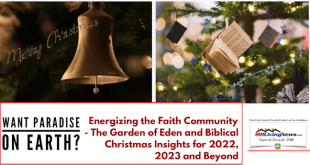 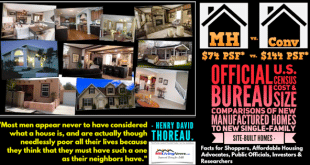