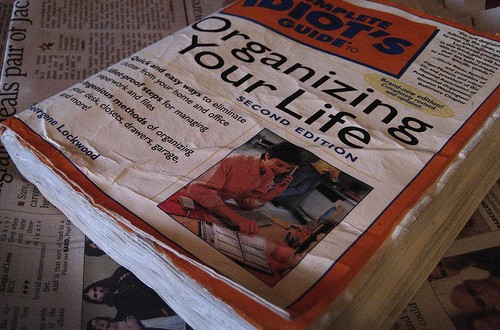 The undertaker wanted to hand my friend Jen a receipt for payment of her mom’s funeral arrangement, but Jen declined to take it. She and her husband were captain and cook on a private yacht that sails the Mediterranean and the only storage space they had were the knapsacks she and her husband were wearing. Now that’s traveling light – living light! – in the extreme.

Most of us with homes have storage space and wish for more. Have you ever heard anyone complain about having too much storage? Apart from renting a unit at a local self-storage facility, we make-do with what we have at home. We park the car in the driveway and fill the garage with stuff. We pack the attic and/or the basement with more stuff. And we identify with the consumer’s definition of a home: a place where we store our stuff while we go out and buy

It’s been said that organized people are just too lazy to have to look for things. Lazy? Well, I’d rather spend those extra minutes doing something else than opening every drawer to find where someone else – or forgetful me – put something. Having a father who served as an officer in the Army Quartermaster Corps, I was born into the consciousness of “a place for everything and everything in its place.”

What are the factors involved in organization? Well, there’s procrastination, in the PRE-organization department. When it comes to actual action, there’s getting rid of clutter, scheduling, planning and organizing. What needs to be organized?

Since you are reading this article, you are Internet savvy. Use Google, Bing or any search engine, and enter how to organize a home. Presto! 218,000,000 or more results will appear in a blink, on every conceivable nuance of this topic. But if you want to stay here and feel good about getting something done now, let’s start with procrastination.

I value it. But don’t we procrastinate from some level of fatigue, or lack of motivation, fear of drudgery or judging something else more important, more fun, more whatever? If so, doesn’t procrastination need to be cured or stopped? Some people think so, but I’m not one of them.

I’d rather value it. Use it well. Use it to think through what it is that needs to be done. What you need to do. Because what appears in form is first a belief. And a belief is first a thought. And feeling makes it a vivid thought. So take just a few minutes now to think about one thing:

How would it FEEL to know where something is,
put your hand on it,
and get on with your life… or at least the task at hand?

How would it FEEL to be less frustrated or swamped
because your use of space and time is more efficient?

How would it FEEL to have your beautiful, affordable home
open and uncluttered?

How would it FEEL to have more time
to do whatever it is you love to do?

Getting organized! To be continued… # #