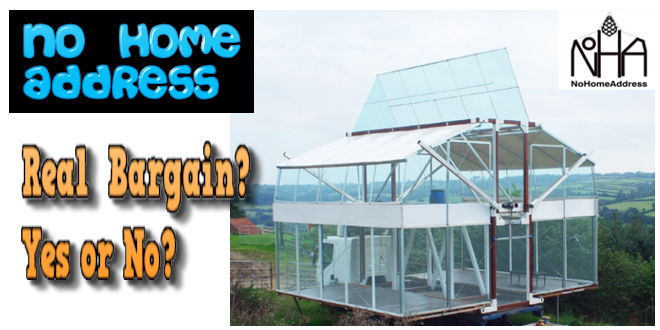 It looks Cool! But is Richard Perkin’s NoHA the Real Deal in Affordable Housing?

It sounds good.  It looks cool. The video will make many think, ‘hey, this could be an option for me some day.’  But is this the real deal in affordable housing, just over the horizon?  Or are the missing facts in this prefabricated home design’s story – missing for a reason?

MHLivingNews decided to take a look at a press release and video by Richard Perkin who expresses what he refers to as his dream.

That dream, says Perkin, is for a happier, more exciting, and more “conscious way of life” with no environmental impact. He says he is quitting his full-time engineering job, and then sold his house to focus on it his project, which is called NoHA Bios, and is on the Kickstarter funding site to further develop the prototype.

The Daily Business News module on our sister site and MHLivingNews periodically feature 3D, prefab and modular concepts from around the globe – such as Revolution PreCrafted Properties, linked here – that tout cutting edge concepts, money, green and time saving designs.

But some of these proposed projects lack key details, and at least at this point in time, that’s the case with NoHA.

First, MHLivingNews will review the details from Perkin. Then, we’ll look at the questions from our publisher that Perkin did not answer.

The shipping container-sized unit is said to expand to a two story, 800 square foot house with a garden on the roof.  It calls for a set of bespoke brackets to simplify the construction for do it yourself (DIY) assembly, with the rest of the structure comprised of structural timber and standard off-the-shelf materials and components to make it as affordable as possible.

The “not so tiny home” costs around £16,000 ($19,947 USD) to build, aims to provide a truly independent and sustainable lifestyle, ultimately incorporating water, heating, refrigeration and food production along with waste reduction and recycling.

“I had a desire for minimalist surroundings, but would feel claustrophobic in a traditional tiny house – I’m 6’3” tall,” said Perkin.

“I wanted water without having to be connected to municipal services. I wanted a way to grow food all year round within arm’s reach. And I wanted ways to recycle all organic waste and to cook and heat with renewable energy sources…and for all of this to be incorporated into a transportable unit.“

As the engineer-turned-architect looks for additional funding, he’s focused on his vision of making his homes available for everyone.

“The NoHA BiOS is a living platform designed to challenge the norms, to redefine the idea of a house as a home…a vision to create a spacious, light and airy structure that provides the benefits of mobile living without the limitations of mobile homes, and offers the advantages of traditional static homes without the associated costs and disadvantages,” said Perkin.

“My aim is to make the design available to as many people as possible in both, developed and developing countries so that anybody can build it for themselves at minimum costs as most of the structure is made from off the shelf materials and components.”

Too Good To Be True? What Facts are Missing?

Seasoned builders know that the shell of a structure is just part of the total cost.  Beyond the ‘skin’ of a prefabricated design, such as this one, are elements such as labor plus:

and more. As any housing professional who looks objectively at this proposed project will note, none of those bullet items were mentioned in any of Perkins’ promotional media releases. When MHProNews contacted Perkins to ask him – are those items priced into this design?

The concept is interesting. What will the final price be for such a unit’s design?  At this point, it is not easy to say if this is a real breakthrough…or not. ##