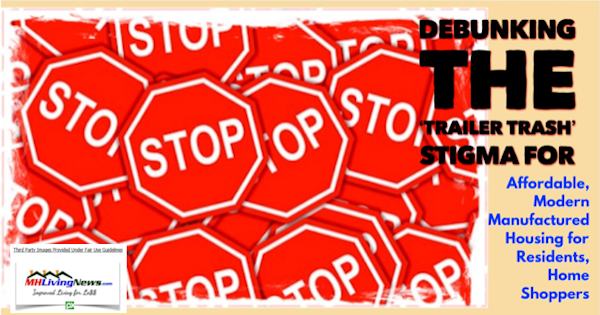 There are few turn-offs that are arguably worse to manufactured home owners and residents than that of ‘trailer trash.’  First, it is unjust.  Second, there have been no mobile homes since June 15, 1976.  The ‘trailer house’ era ended roughly 2 decades before then.

Its an issue on both sides of the U.S.-Canada border, as the quote from Canadian Al Kemp below reflects. 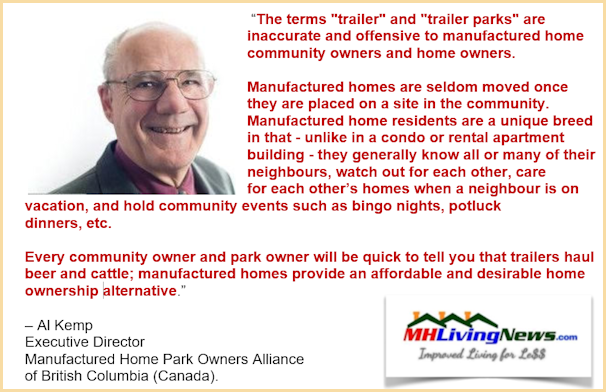 In a recent meeting in the U.S. held to deal with internal issues faced by the manufactured home industry’s independent professionals, a community industry association leader told the group in attendance that she had met with Fannie Mae officials in their state.

Those officials, per that leader, did not know what a manufactured home was. They had to be shown and have manufactured homes explained to them. Once they saw for themselves, they were reportedly pleasantly surprised and impressed.

That’s a headline story in itself, as the Manufactured Housing Institute (MHI) has Fannie Mae as a regular sponsor and attendee at their events. Furthermore, over twenty years ago, when Richard Genz – a researcher for the Fannie Mae Foundation, via an in-depth study – praised manufactured homes back at that time.  Manufactured homes have only improved since then.

“This trend toward modern designs is a smart way to meet demand from growing segments of buyers, including millennials, downsizing baby boomers, and first-time homebuyers,” Edelman continued. “These buyers and others are looking to manufactured housing as an affordable option providing quality and value in a market where the supply of site-built housing is low and prices are high. Quite simply, manufactured housing is a key opportunity to address our growing affordable housing crisis.”

Those vignettes above connected to the housing mortgage giant Fannie Mae reflect the chasm of misunderstanding about manufactured housing and the reality of manufactured home living.

In pure, unadulterated science, every test or discovery ideally reveals something to do, and something not to do. Having been certified as a medical professional on three continents, the scientific method and deductive reasoning were a part of my European medical training. One must earn the title of MD, it isn’t handed to you as a ‘participation’ award.

You might metaphorically say that science is in my DNA.

What is posted on this page are a series of videos. Each comes from differing – and you might say – competing voices from within manufactured housing. Each voice claims as its aim to uplift the image of manufactured homes.  This first video was posted on YouTube on September 1, 2017.  At the time this is posted, only it has had only 8,520 views.

Our showing these videos should not be misconstrued as implying an endorsement of that firm or organization.  One must do their own due diligence.  The following has had 32,970 views in just 2 months.  The point here is that some are posturing efforts, while others are actually trying to address the issues that cause misunderstandings.

The videos and the firm behind them stand or fall on their own merits. Let’s stress that there is ‘wheat and chaff’ to be found almost anywhere that you look. No living person or organization is perfect. No product or food are perfect.  This platform and our team aren’t perfect either.

That said, each video reveals much to a scientific mind, and as a scientific test, those test results speak to what should be done to correct the record to foster the acceptance of manufactured housing.

What makes the Clayton Homes video of interest is the following fact. Their parent company, Berkshire Hathaway, could easily promote the truth about manufactured homes as often as they want to do so. Warren Buffett led Berkshire Hathaway is widely seen as a dominating force at the Arlington, VA based Manufactured Housing Institute, or MHI. Berkshire owns 21st Mortgage Corp, which right or wrong has been accused of “predatory lending.”

Some quick facts spell out the thesis for this article.

Fannie Mae claims to want to support manufactured homes. They are mandated by federal law to give such lending support. But over a decade after federal law says that such support is mandatory, they still only have a tip of their toe in the water. The facts speak.

Fannie Mae’s own representatives in that state didn’t know what a manufactured home was? How does one explain that disconnect?

MHI prior chairman and 21st Mortgage President Tim Williams has said the following. 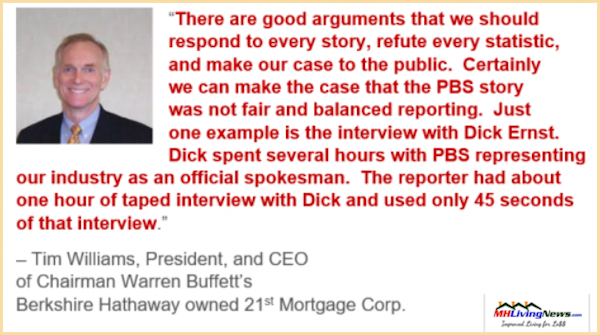 Knowing that valid perspective, MHI, Clayton Homes, and Berkshire Hathaway have arguably not done what Williams advocated.  Which begs the question, why not?

When asked to attend the meeting of independently owned manufactured home industry professionals mentioned at the top, with the opportunity to explain – if they can – the troubling facts, documents and video linked here, Tim Williams at 21st declined attendance.  So did Williams colleagues at Clayton, Cavco’s Joe Stegmayer, and the senior staff at MHI. Why?

Fannie Mae officials were also invited, and they too declined attendance. Why did they fail to meet with independent industry leaders and members in a semi-private setting?

To a scientific or logical mind, one is left with some stunning conclusions.

Warren Buffett, BH Media Group, Berkshire Hathaway, Clayton Homes, 21st Mortgage, Fannie Mae, and MHI may be posturing support for debunking the myths about how fine manufactured home living is. Yes, they have an obvious interest in promoting it, but they are either doing so ineffectively or perhaps in a fig leaf sort of manner at best.

We at MHLivingNews and our professional sister site – MHProNews – believe that the facts and real people should speak.

That’s why we periodically showcase the rich and famous who have selected over 42 year-old mobile homes, or more modern manufactured homes as their own. When movie stars, entertainers, millionaires, and billionaires – to whom image matters – pick a manufactured home as their own, that’s better than any commercial one is likely to write.

Kid Rock elevates and celebrates the working class in his music-video, PoDunk. He does more than celebrate them, he identifies himself with them in buying, living in, and taking pride in his manufactured home.

By not being a paid spokesperson for the manufactured home industry, Kid Rock does more to raise a positive awareness than those who are paid or mandated by law have been doing. Here’s a man who owns a private jet and a Rolls Royce. He takes pride in his manufactured home, and celebrates those who are not as wealthy as he is who also live in lower cost manufactured homes, or in older conventional housing.

The rest are details and commentary found in every other video and report on this site. Because we too celebrate and elevate day-by-day those who call a pre-HUD Code mobile home, or a post June 15, 1976 manufactured home their own.

There are many stories waiting to be told in the days ahead. If you are new or returning, thanks for dropping in. Look around. It’s okay to be a little skeptical, scientists and doctors want evidence. You should too.

Engineers are scientific too. See what this engineer and his wife had to say, not in a paid commercial, but in an authentic and unscripted video interview. We did not know what would be said or occur, until the interview with Jerry and Karen McKibben was finished.

So, for the scientific or open-minded, when the evidence is in, then the wise accept the reality of the evidence.

As our publisher said in the article linked here about Fear, people once believed that the earth was flat. They were mistaken.

Manufactured home living can be as hip and cool as the retirees, students, working class, middle- and upper classes economically can make them. It becomes your home, and your lifestyle, lived your way.

Have it your way, went the refrain from an old Burger King commercial.

Why are these people smiling?

Why not explore the joys of affordable living, and do with the money you are saving over other housing options whatever you wish? Manufactured homes are a possible door to a better life. #HousingChoice, #NobleNotMobile.

“We Provide, You Decide.” © ## (Lifestyle news, commentary, and analysis.)

The First Step to Problem Solving and #HousingChoice