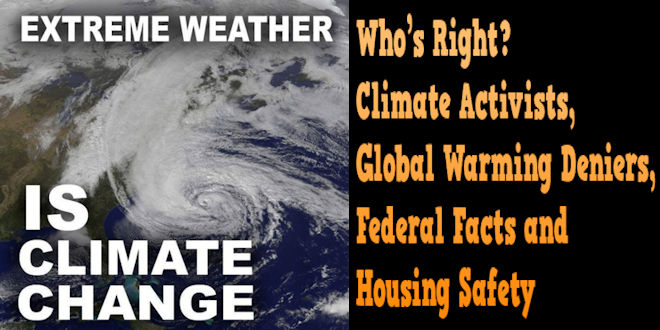 As the Washington, D.C. Climate March takes place, a new report from Climate Depot may be like a proverbial rain on their parade.

According to the report, the federal government has just released another key piece of scientific data, one that counters claims of man-made global warming.

The data, from the U.S. Drought Monitor report, shows that droughts in the U.S. are at record lows in 2017.

“Drought in the U.S. fell to a record low this week, with just 6.1% of the lower 48 states currently experiencing such dry conditions,” federal officials announced recently. 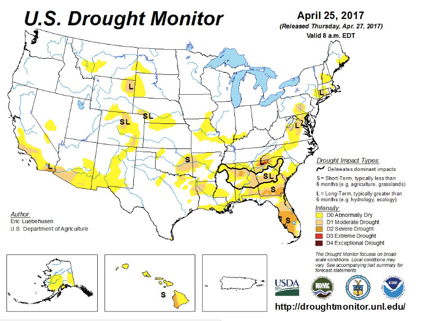 “That’s the lowest percentage in the 17-year history of the weekly U.S. Drought Monitor report.”

In recent years, climate activists have made a number of claims, including declaring California to be in a permanent drought. With the most recent winter cycle, that does not appear to be the case.  Concerns included flooding from post-winter storms, as spring and summer weather melts the snow.

Former Vice President Al Gore, who has focused on extreme weather, making it a key in his case for climate change. In spite of the evidence to the contrary, Gore says, “Every night on the news now, practically, is like a nature hike through the book of Revelations.”

Hyperbole aside, with more cable and online news options, people may see and hear more disaster reports, even though the total numbers of such weather events – at least in the U.S. – are declining.

The Climate Depot report points out that it’s not only droughts which are at record low levels, but almost every other type of extreme weather: tornadoes, floods, droughts, and hurricanes, are at or near record lows.

When bad weather does strike, one of the big misconceptions related to shelter is that modern manufactured homes (built to HUD Code standards, post-1976 – and most notably post the 1994 manufactured home code update – when properly installed, are not less safe than traditional site-built houses.

“That box [manufactured homes] is going to be built better than any [conventional] home, unless it’s built to hurricane standards,” said Tim Reinhold, Ph.D., Chief Engineer for the independent Insurance Institute for Business and Home Safety (IBHS).

The IBHS wind test was presented in the mainstream media, on NBC’s Today Show, which showed that modern manufactured housing, properly installed, performed better than conventional housing construction in an Insurance Institute for Business and Home Safety (IBHS) test.  Part of that NBC News video, along with other dramatic windstorm storm footage, is found in the video report, below.

Reinhold and the IBHS wind tests aren’t the only evidence. 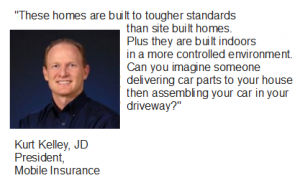 “During 2004, when several hurricanes hit Florida, we insured over 2,000 HUD Code manufactured homes there. While a few were badly damaged when large Palm Trees fell on them, none of the post-1996 homes were knocked off their foundation, none had their roof blown off, and none suffered a structural failure. Modern HUD Code manufactured homes properly set perform great in high winds,” said insurance broker Kurt Kelley, JD. 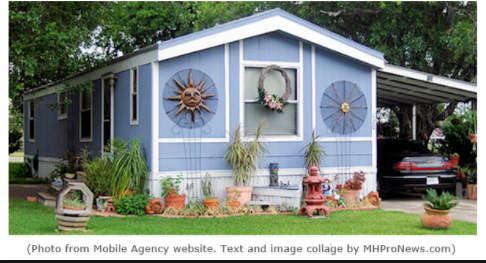 “Having interviewed [hundreds of] manufactured home owners, experts and professionals, we know that too many [Americans] still have an outdated concept of a manufactured housing, calling them “mobile homes” — or worse — ‘trailer houses,’” said L. A. ‘Tony’ Kovach, publisher of MHProNews, consultant and industry expert.

“Yet there have been no mobile homes built in the U.S. for more than 40 years,” the publisher wrote in an Op-Ed in the Lakeland Ledger, linked here.

Steve Duke of the Louisiana Manufactured Housing Association made a similar point to MHLivingNews, when he said, “The terminology matters because the terminology determines the construction standards.”

“The National Fire Prevention Association report on the safety of modern manufactured housing said: ‘A manufactured home is not a motor home or a trailer, and although it is often called a ‘mobile home,’ it is not that either,”” Kovach quoted from the NFPA’s report, which is included in an article, linked here.

News agencies, industry professionals, and even a those who’ve studied the issues who have the highest academic degrees, agree.

Windstorms Can Be Equal Opportunity Destruction

Also of note is the case of the 2011 tornado that struck Joplin, Missouri, killing 158 people and destroying or damaging 7,500 homes with 200 MPH wins.

None of the homes damaged in the disaster were modern manufactured homes.

While tornadoes do hit metro areas – such as Joplin or Moore, OK – they tend be more common in rural areas, where old pre-code mobile homes and earlier manufactured homes are found.

When factory-built homes are damaged or destroyed in these areas, it’s often because trees fall on the homes, as Kelley noted.  The National Oceanic and Atmospheric Administration stated that damage by trees or vehicles that slam into pre-code mobile homes or post-code manufactured homes is common; but that kind of damage happens to conventional construction, too.

During many years, the odds are in the hundreds of thousands – or the millions – to one annually in the favor of manufactured home residents not being struck by and killed in tornado.  One study reflected that people are 70 times more likely to die in a bathtub accident, than they are likely to die in a mobile or manufactured home struck by a tornado.

Still, there are those who want an extra measure of security, and are willing to pay for it.  A variety of household-size storm shelters are available on the market – which starting for a few thousand dollars – can make those inside it much safer during a tornado.

As Dick Moore, of Dick Moore Housing informed MHLivingNews, a manufactured home has to be so durable as to be able to transport one down a highway at interstate speeds, which when bucking headwinds, is like going through a small tornado.  No conventional construction is built to do that — common sense proof of engineer Reinhold’s point.

In short, safety in manufactured homes are certainly on par – or when well-installed – are safer than traditional construction, even in the decreasing number of severe storms being seen in the U.S. ##