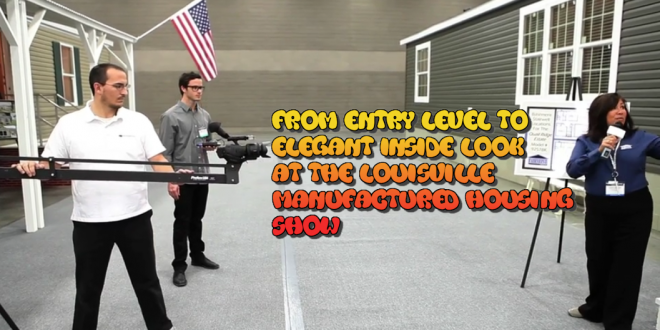 Given its 50+ year history, the Louisville Manufactured Housing Show has been called the ‘grand daddy’ of all the trade shows that serve manufactured home business owners, managers and professionals. For years, there has been a debate on the show being kept exclusively as a professional event (meaning, closed to to public) or opening it up on the weekend following the trade days to include ‘public days.’ For reasons of cost and other factors, so far the strong conclusion of those who organize the event has been to keep the show closed to the public.

That said, the Inside MH  team has had full access to the Louisville Show for many years. I’ve enjoyed being personally involved in the promotion and educational parts of the event. So along with our friends at ManufacturedHomes.com, we were able to video homes and share with the public scenes from models that you likely won’t see any other way! One of the many of those videos we did is below.

I want to thank you for your exceptional work in promoting and providing educational seminars these last 5 years for the Louisville show. Back then the show was regrouping after a year in which there was no show due to the challenging economic times. Today the show is stronger than ever as we approach a display of more than 50 homes.

The seminars you organized were standing room only in recent years. There is no doubt your contributions to the show had a very positive impact in assisting in the Louisville Show comeback. Tony I appreciate all your efforts promoting our industry, not only at Louisville, but with your publications and other promotional and education efforts.

Thanks, Ron and each of the many others involved, it has been a wonderful ride for us all! Trade Show are an important example of team work in action, where hundreds of people and multiple companies and associations pull together for a common cause that’s good for the industry and thus the public it serves. The Louisville Show has and will provide memories for the thousands of professionals who over the years have and will be an integral part of the event. Those dozens of model homes on display – that range from the ultimate in entry level affordability to mid-priced to elegant, residential style homes – go to manufactured home retailer and community locations in many states. From there they become someone’s home. ##