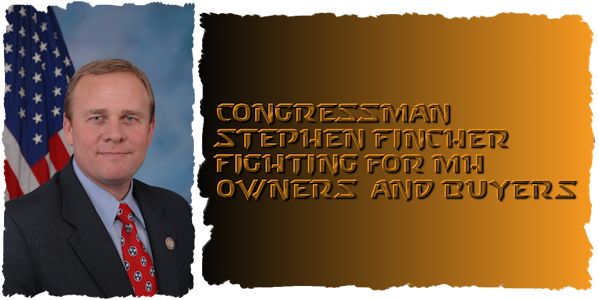 There are fine lines to be walked in the subject of The Preserving Access to Manufactured Housing Act – HR 650/S 682. One should not over or understate a problem on this or any other serious issue.

MHLivingNews.com has been covering the fact that owners of the lowest cost manufactured home (MH) are being harmed by federal CFPB regulations. We’ll share below the full OpEd of Congressman Stephen Fincher (TN-08) published in The Hill yesterday. Let’s first set the stage for his important remarks with some facts.

1)    Manufactured home owners directly impacted by the Consumer Financial Protection Bureau (CFPB) regulations are those who have a home that would sell or refinance with a loan balance of under $20,000. Prior to Dodd-Frank, financing on homes below that price was easier and more common.

But because of CFPB imposed regulatory burdens, the biggest lenders in MH can no longer offer loans on that $20,000 loan balance or below. That would most commonly impact pre-HUD Code mobile homes, and some early post-HUD Code manufactured homes: perhaps 20%+/- of all MH today.

3)   So called “Consumer Groups” that supported Dodd-Frank and which still support the CFPB have had a deafening silence on this subject of the regulatory harm annually to thousands of owners who may want to sell, plus many potential buyers of MH. More on that in a referenced article linked at the bottom of this column.

These are the issues that Congressman Fincher and a bi-partisan coalition of U.S. House of Representives members are working to correct. We’ll provide additional links and resources following Congressman Fincher’s OpEd, which is reprinted below between the — lines.

Fairness for rural America – that’s what we need and deserve. Unfortunately, millions of rural Americans are being unfairly shut out of the market for affordable housing. Instead of stacking the deck against rural America, Congress should be doing everything possible to restore the opportunity of homeownership.

Manufactured homes are commonly more affordable than a rent payment and provide buyers with options that meet their needs. Sadly, access to financing for manufactured homes has been seriously harmed due to actions by the Consumer Financial Protection Bureau (CFPB). Without the option to obtain financing, thousands of manufactured home customers are now trapped and unable to buy or sell homes.

The CFPB’s actions are jeopardizing families’ net worth as they face the risk of seeing their home values crash to fire-sale prices. These below market sales hurt every homeowner in the community who feels a huge loss on the equity of their home. The CFPB rules have also forced retailers to stop providing technical assistance to consumers during the home buying process – ultimately leaving consumers in the dark.

Instead of slamming the door shut in the faces of millions of Americans, I’m putting options back on the table with my bill to restore access to financing for manufactured housing. This is a pro-consumer bill, and it solves the problem that I continually hear from many of my constituents. My bill maintains federal oversight of manufactured housing lending, safety and construction standards and preserves core consumer protections against predatory lending practices.

There is no incentive for a manufactured home lender to grant a loan to a customer that does not clearly exhibit an ability to repay, as lenders generally retain the loans they make on their books. This is different than other types of loans that are packaged and resold for a profit. In fact, no one wins when a buyer is unable to pay their manufactured housing payment – the borrower, the lender, the manufacturer and all its employees lose out.

The core component of my legislation is a specific adjustment that the CFPB already has the authority to make under Dodd-Frank, but has refused to do so. It’s hard to believe that the authors of Dodd-Frank would have included this provision that could be deemed a predatory lending practice.

According to the 2013 American Housing Survey, out of the 8.6 million manufactured homes in the United States, over half of these homes are located in rural areas. This should not be an urban vs. rural situation, but that is what it has become.

I am pleased that a bipartisan majority in the House supported my bill and sent it to the Senate where identical legislation has been introduced by Sen. Joe Donnelly (D-Ind.). I will continue to serve as a voice for rural America as I fight to restore financing options so folks can have access to affordable housing.

Fincher has represented Tennessee’s 8th Congressional District since 2011. He sits on the Financial Services Committee. ##

> U.S. Senator Joe Donnelly and others on the Preserving Access to Manufactured Housing Act S 682 and HR 650

> Dodd-Frank and Manufactured Home Financing: The Place Where Good Intentions and and Uninted Consequences Collide