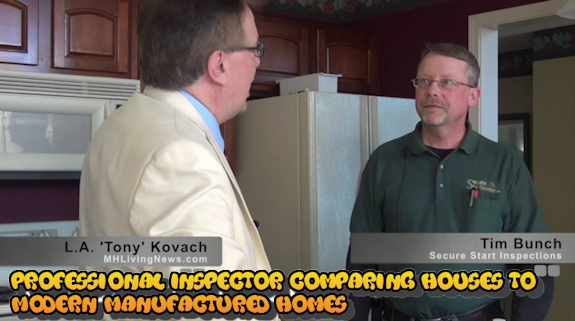 Tim Bunch has inspected not dozens or even hundreds of houses over the years. He has inspected thousands. He has been elected the head of the house inspectors association in his state. That should qualify him as an expert in most people’s minds. So it is with particular interest that we at MHLivingNews met with Tim to do this in-depth video interview that compares conventional houses with manufactured homes.

Whatever kind of housing you might be thinking about, this video is going to be eye-opening! If you’re about to invest 5, 6 or 7 figures in a home – because Tim has inspected houses from under that 6 ($100,000+) figure to that 7 figure (million dollar plus) ones – you should invest the 22 minutes to pay close attention to what Tim Bunch of Secure Start Inspections has to say. No reality TV show will reveal more than this one will!

My thanks to Tim for making the time to do this insight-packed interview with us. Let’s do a shout-out from our team to Campbell-Caron Properties for making this introduction to Tim, and thus this episode of Inside MH Road Show possible. Let me dally on that second thank you for a moment, because their Saddlebrook Farm location where we filmed this is 100% occupied. Campbell-Caron was motivated to facilitate this interview so the public can better understand the amazing quality, appeal, green, energy saving features found in today’s manufactured homes. Hats off to all involved! ##